591 GearscoreCap , I just want to know

Hey there, I play in server Midgard, I’ve been lvl 60 since the end of first release week. And after that started leveling my watermark to 591.

Before typing anything else I want to be clear that this is not complaining, I am not crying. I try to look at posts as much as possible but if I missed one about the same issue recently I’m sorry.

I just want to know if we are ever going to be able to get past 591 watermark, I wan’t to know if its a bug or if its intentional and if it is intentional will it be increased because I wan’t to make plans for my game play.
Currently I don’t want to do the expeditions cause I feel like they are a waste , using limited orbs without the 600 drop chance. Some people keep saying that having 3 major luck trophies, full luck set +40% you can start getting past 591 drops, some even said it happened on stream. Tried to find it on reddit couldn’t. Lots of people also saying that they indeed drop these 595 600 drops (not the special name ones) but still no proof that I’ve encountered yet.

Like I said, I just want to know if this is temporary or if it is permanent. Otherwise I don’t know what to do in the game. Leveled my trading skills, have almost 500 hours and I keep enjoying it but some clarity on this subject for good would be nice. I know they said a few things a couple days back but still pls SOMEONE just say it. And pls if you do drop these watermark items and come to comment , would be lovely if you included the picture (

EDIT: Just wanted to add a comment to let people know, I know that you need to farm 65+ 66+ to get higher GS watermark items and thats what I did and tried

My guess is that the 591 cap is supposed to be a soft cap and not a hard cap like it is right now.
That way we can actually drop gear that goes to 600GS on lv60+ mobs but it’s gonna be rare.
They just didn’t enable it right now because they know very well how broken their game is and how easily people are gonna find a way to farm these 600GS items and be full gear in no time + flood the market with them if they’re not bind on pickup (which I assume they will be, but who knows).

So yeah the only way RIGHT NOW to get these 600GS items as far as I know is to get a super lucky drop from the war and outpost rush rewards.

First of all thank you for your comment,
I too think and hope that this is intenional and they did it so people couldn’t rush. But an official answer from them would still be very nice

Hi everyone! Many of you have been asking about the nuances of the High Watermark System, and I’m here to help! If you don’t know what the High Watermark System (HWM) does, it’s a system that kicks in when your character reaches level 60 and ultimately governs the power of gear drops you receive as you venture into the more dangerous areas of the world and fight powerful enemies. When an enemy or container drops a piece of gear for you, it rolls on its Gear Score (GS). During your leveling ex…

What this means is that while you’ll reliably see HWM increases up to GS 530 when defeating Level 61 enemies, your chances of seeing something beyond GS 530 from a Level 61 enemy is significantly lower than it is from a Level 62 enemy. Level 64+ enemies are capable of reliably dropping gear up to GS 600.

So if level 64+ mobs are not reliably dropping 600gs, what we need to ask is when the bug gonna be fixed.

I’m curious about the stats difference between 591 and 600GS gears btw.
Anyone got the numbers ?

Drops up to GS599 I can confirm, because on my old server you could buy corresponding drops in the TP. I can exclude a craft, because the base items are definitely drops.

I’m curious about the stats difference between 591 and 600GS gears btw.
Anyone got the numbers ?

I think this line is extremely important. It is most likely very hard to get anything above 591 when farming 64+. You should rather try to farm 66+ bosses here.

Thank you for your answer Agamemnon, I hope and think that it is a bug too but maybe they limited it for the time being we shall see.

AGS probably has hard caps on so many things to prevent people “exhausting” what the game currently has to offer. The sheer amount of bugs and exploits everywhere will probably take years to be tackled and if they start to get pressured for new content, things will probably not turn out well. Imagine complaining AGS rushed the game’s release, then pressuring for new content while bugs and exploits are basically what the game is right now, and then complaining again when the new content comes with more bugs.

I agree 100 percent with what you say, I also hate complainers (not people who complain but people who complain about the same stuff nonstop without effecting the outcome anyway possible). I also think that there are lots of bugs and it will take atleast months and they shouldn’t rush any content at this point.

For me these are all legit arguments but still , not a timeline but maybe a more solid explanation would be appreciated. For example if I wont be able to get past 591 Watermark for lets say atleast 3-4 months , I am okay with that but I would love to know that before hand so I can decide how much of my time I should and could dedicate which will help me both enjoy the game and progress

Hey, I would really love that thank you,

I also think that it is implemented but I just want to be sure on the fact that if this is temporary and if I should wait because if this is the actual way it is supposed to be then it means that I don’t need and have to wait for anything , I can just start farming expeditions and this is basically what I want , to know how to move on. 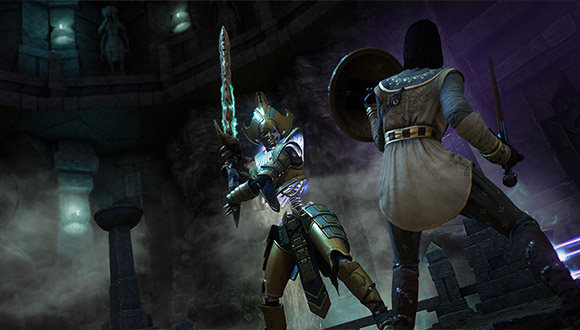 Fixed an issue preventing gear score to increase past 589 from drop rewards.

It can be the reason for the perception of “591 cap” on the open world.

Heyy , lets goooo they said it,
Time to farm last watermarks to get them to 600 then time to Dungeon boys and gals ggs

I got the sword with GS 600 ytd at Siren but it’s not legendary. The sword name “Coral Lash” which I’m confusing like “is it supposed to be legendary?”

They said in todays ptach that it will be fixed but no, my friends also got special name drops with 600gs which are not Legendary, you can check the database sites to see if the item you are looking for can drop legendary , if they show it as 500-600gs droppable with yellow picture then it means it will drop legendary if you drop it 600gs but, if it is purple, it means that even if you drop it purple it will be epic.

Some items being legendary when they hit 600gs doesnt mean that every 600gs item is legendary.
Or atleast this is how I think it works.