I totally agree. The amount is 30% if I understand it right. Even as a reward for PvE play that’s way too much. 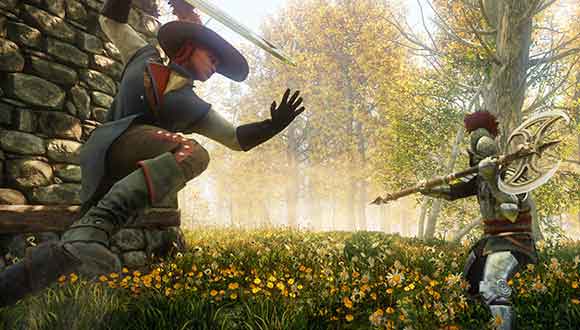 Here is the most important piece:

“There has been speculation that we have moved away from PvP, this isn’t the case at all. PvP is important to us and we are committed to ensuring it plays a significant role in our game. To be specific, by PvP we mean, fair fights that are organized, skill based, and opted into by all participants. Not PKing (Player Killing), which is a predatory behavior that relies on exploiting another player’s lack of experience, progress, readiness, or willingness. So for those folks who desire that harsh PVP environment(open loot), New World may not be your favorite game, however, we do hope you enjoy the PVP we will offer.” Our Vision For Combat: What Happened? v2.0 General Discussion

DISCLAIMER: To anyone familiar with the original post, very little has changed. This is just a continuation of the most popular discussion from closed Beta. We finally made it to launch my friends. It’s been an interesting year and a half since the original launch date with a lot of ups and downs. Still, as the population of the game has increased, so too have the complaints surrounding the combat system. Anyone who played in the early Alphas or the Preview can immediately tell where those issu…

But I wouldn’t expect you to know. You are making stuff up all throughout your posts.

Goes against the PvE approach they were trying for.

THE ENTIRE GAME was CREATED to be a PVP game then PvE was placed on top of it.
You are nuts.

And I think this is the cause of much of the dissension over the game. Both sides at some point have felt that there was a hard turn of the ship and people fell off and were left behind.

At first it was the OWPvP players when the game shifted towards the profitable market of PvE players. Now PvE players sense that the shift occurring has the game steering strongly toward OWPvP play.

Now this may all be part of an overall strategy we don’t know about. What it feels like is that the game can’t make up it’s mind as to what it’s going to become.

Yes, I’m a PvE player and never flag so it doesn’t matter to me.

I played alpha 1 and it was a horrible game. I uninstalled it after 45 mins. Yet here we are and I have over 1500 hours into the game from Preview, alpha 3, both betas and launch.

yes, he is right. Although I do not share his optimism. There is no content and no working vision for PVE.

Darkness falls entrance was only open for the controlling realm. After about 15 minutes all those filthy Albion players were cleared out and it was a pve experience. I loved daoc however, it had many problems. Separating pve and pvp was its strong suit and I would make the argument that it was a more pvp oriented game than new world.

I flagged up and gathered today. I died once and killed two. The death was to a strait up gatherer who just steamrolled me but the two kills were to solo roaming pvp players. I was not in my luck gear.

I will be flagging when I gather from now on because the bonus is to every profession and I seem to have got a lot more legendary crafting materials. I was wearing a luck set for chests too and those results were super good.

The problem is that it’s not a good way to unwind after a long day. I think when I want to relax now I will most likely just que up for outpost rush because that’s less stressful. I like to relax at the end of the day and this game won’t accommodate that now. I know how good it is to gather with a built in luck bonus for everything and now not flagging seems like an inefficient way to play. I don’t like this change. It ruins the game for me.

The game was brought for me as a gift, I didn’t keep up to date with any news regarding the game or anything like that. I signed up for the beta on the last day as an email was sent and I thought why not give it a try (never did get to play the beta)

But to answer the question, Yes I would still be playing, even though the game has had some frustrating (and to me, some downright hilarious) issues for some people, the overall experience I have thoroughly enjoyed. Then again, I do mainly PvE, I’ve done a bit of PvP, I’ve taken my time as not to rush myself through the experience, only level 57, and still have plenty to do.

As I said in another post, I am happy for the PvP players to be given something that’s for them.

The same 5 people that keep posting these threads, become very agreesive when they are shown why they are wrong. So at this point it’s fun to just poke them.

We can wrap this thread up simply with the same thing PVErs tell the PVPers constantly.

“AGS made a descion, if you do not like it, it’s best to look for another game.”

They did make a decision. This is the way they want the game. I will never buy another game Amazon puts out or is involved with. Also, you are almost never polite from what I have seen. You enjoy this for some reason and I’m glad you are happy with the game.

“The popular market of PVE”

That DOES not exist, outside of PVErs heads.

FF is DYING not growing, you know what is growing? BDO, you know why WOW lasted so long, PVX.

The majority of people enjoy both PVP and PVE, and are not Hardcore one sided. The Hardcore One Sided are a minority on both sides.

There has got to be balance, and that’s what this change is, compromise and balancing.

That is the majority, the HC I only Do 1, people are likely more of a Minority then the RPers.

This game is so far beyond toast now. Bugs, upon bugs, upon exploits, upon non-fixed economy, upon stuck items, upon trending to more, and more a PvP environment, that they said would be a welcoming game for both PvP and PvE alike.

Guess I got my $40 worth for almost 2 months of play. Just turning out to be nothing like I was led to believe.

It grew, for a bit, during the streamer influx, it was on a hard decline prior, and has been again since.

You realize that WOW has this exact same feature right??

Still one of the #1 PVE games…

We can wrap this thread up simply with the same thing PVErs tell the PVPers constantly.

“AGS made a descion, if you do not like it, it’s best to look for another game.”

This has never seemed an adequate answer for me. I have certainly felt that way at various times in my gaming experience. I’ve even made emotional responses like we see here.

Telling people to hit the road is just hand waving away real issues that players are experiencing. No side should be doing that in a game that is clearly divided on it’s own identity. It’s kind of insulting in a way and does no one any good.

It’s got a lot more players right now than it ever has had. Btw ff is so crappy it blows my mind that anyone would play it.

It’s not divided on its own identity. It’s a PVX game.

This change is further proof of that. This change is not beneficial to PVPErs at the cost of PVErs, it’s simply a balance, due to the risk and frequent death involved in Flagging, coupled with the lack of ability to wear luck/gather gear while Flagged.

No one is being forced to enable, or Disable Flagging with this system. This isn’t the first game to add such a system, pretty much every PVX game has the same these days.

Their Reaction, is a knee-jerk response that is filled to the brim with entitlement, they cannot take a second to see why this change has merit, they are too busy only considering their own gamelay.

While I may continue to disagree with you thank you for making your points clearer. It can only help. As I’m considering what direction I would like to go I will be considering points like you’ve made here.