A WHOLE GUILD USING EXPLOIT TO WIN WAR (After 9 defeats)

Good night, we’ve been gathering people for almost 2 years and preparing for the official launch of New World, we’ve studied the game, prepared strategies and formed our Guild with the objective of becoming one of the biggest and most recognized Guilds in Brazil. However, since the beta we unfortunately suffer problems with certain players, from exploit abuse, hate speech against guild members in lives, and even DDO attacks, and mass reports.

We overcame all this as a guild, we didn’t let ourselves down and we came to the Official with the best team we could form, determined to dominate our server and so it was done, with 9 wars in a row undefeated.

3 days ago an Exploit was revealed where Invicibility, another that they have infinite ability (with ax), and another that during the war the characters do not take cannons because of the lag caused.

Invincibility Exploit used against us during war! Please fix! Bugs and Exploits

What is your character name in New World: Kona What server/world did you experience your issue on: Bilskirnir [NA EAST] Describe the issue you are experiencing: (summary below) Is this a bug or an exploit: EXPLOIT BIG EXPLOIT (if a bug) How did the issue effect your gameplay: We lost Ebonscale Reach (if a bug) Were you able to recover from the issue: Hell no, we would have to raise influence and re-declare war (if a bug) Please include a screenshot or video of the issue that you have expe…

What is your character name in New World: ReddRiver What server/world did you experience your issue on: Ashok Vatika Describe the issue you are experiencing: A certain sequence of inputs near a town can put your hatchet ability, Feral Rush, to a 0 second cooldown. Is this a bug or an exploit: Bug Location outside Everfall village but I’m pretty sure this can be replicated outside any town What are the steps to reproduce the issue as you experienced: have Great axe and …

After 9 undefeated wars, today we had 3 wars, and for some reason ALL unable to play, with characters that didn’t die, that fell and came back to their feet, with infinite berserkers in the hatchet, and characters locked inside the point of the flags without falling, even clearly dying.

In this clip Twitch you can see players literally teleporting inside the point (with the exploit of using the windowed screen, moving from side to side, becoming invincible and dying remain spawned within the point)

From another angle, a player inside the point, who couldn’t hit the enemies as they were all teleporting and invincible Twitch

In this one, he clearly uses the same ability 2x in a row

If this isn’t enough, there are countless clips

The same player in the clip never used the camera on top of skills, as you can see here, right after the war he returned to the place he always used Imgur: The magic of the Internet (the same outfit)

I don’t want to be a jerk and say that we have an invincible team, but after 9 wins, we suffered 3 consecutive losses, clearly with something strange happening, unstable server, characters that died and are still standing inside the point, infinite abilities, we decided to look for more in the background, and all voids (live replays) have been erased, and private.

As a serious guild, which prepared itself from the first closed alphas, looking for players, and coherent people to form a team, this is disappointing to happen.

We have come to ask you to take the time to at least review the data of such players/faction and that action be taken.
We await response!

and then comes the views of skipnho cursing and making fun of the smaller streamers’ live. Pathetic.

This seriously needs acknowledgement from AGS!

The third clip where you say he used the same skill 2 times in a row is true. This bug is made when you use the skill down a ladder. Your ability now has no cooldown and you can use it infinitely. For this reason he used his camera hiding on his abilities. 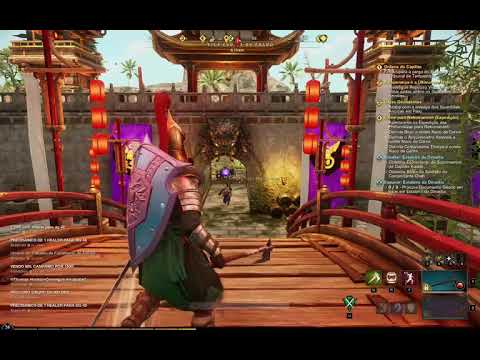 Knowing that this bug was already reported (even Shroud have spoke about it) it seems this thread was open to show people abusing it at war.

Seeing what was provided as evidence here are some points that I could observe:

About freezing and lagging is unfortunately a typical issue in New World wars.

We have the same player abusing the hatched skill bug in another war against the syndicate faction.

Amazon, this needs to be addressed, it’s breaking all isonomy in our server. One can’t just abuse this kinda of exploit, break the game balance, and come out unpunished.

Dang, this is terrible. Sorry you gotta deal with this.

It seems that AGS is aware. @NW_Mugsy wrote this response regarding the exploit:

Hopefully, we get things sorted ASAP, otherwise, how are we supposed to keep our territory?

Well the moment like a lot of players freeze is not that bug, its just bad server performance. We talked to the attacking company after a war and they a lot of us lagging but nobody uses this kind of exploid

You mean nobody admits to it? Let’s be real.

Enemies are invisible at sieges and so laggy. Can’t even play 50+ people are suffering the same problem from my guild.

I just wanted to give you a notice that we have heard your voice, received your report, and reported the mentioned problems further to our Team so we can investigate this. Thank you so much for reporting this!

And these guys still playing free