Add Transmogs to the Game!

Not having transmogs in the game is an area of content that they’re sorely missing out on. Coming from WOW, transmogs were a big part of the game, a piece of content that a lot of people enjoyed. There were literally lfg’s specifically for t-mog runs, and gave people a reason to play all of the old content. To further elaborate on that, I started playing WOW during the Shadowlands expansion, and even though I started playing WOW during the Shadowlands expansion I ended up doing every raid and every dungeon in the entire game (every expansion). There’s no way I would of even thought about doing the old content without transmogs. As of right now in New World every player in the game more or less all look like this (Figure 1). I’m not saying the Voidbent Set doesn’t look cool, I’m saying I would like options to make my own unique set, and have the ability to have all armor skins saved and be usable.

The groundwork for a transmog system has already been laid out in MMO’s, and would not be hard to implement. The best Transmog system hands down has to be WOW’s. It was easy and fun to use. Here’s an example of how WOW provided players the ability to Transmog their gear (Figure 2). There is a lot of gear in New World that looks really great, but were confined to only use the gear for end game, dyeing the gear we have equipped, or store bought skins. The problem with this system is that we can’t dye store bought skins, and are limited to dying our end game (which almost everybody uses the same gear). In turn this limits players to the gear choices and therefore results in everybody in the game looking the same. There’s a lot of pieces I’ve seen that are really cool that are unusable in end game, due to being low level or having really bad perks. Here are just a few examples of really great looking pieces that would be awesome to use for transmogs (Figures 3-13). I truly think transmogs would bring a fresh new aspect to New World. Transmogs would provide players with a piece of content that has no end game, and give players an avenue to utilize their creativity and imagination to make something uniquely theirs.

Yea definitely a must have. This game has a lot of cool gears that has good potential to be combined with others to make unique looking sets.

It would be a great addition… just not sure we’d see it this year, as they continue to fix and expand the game.

I do agree as well. Transmogs is something AGS would have to put on the back burner before getting other things sorted out for sure.

I suggested long ago to remove dungeon orbs and the dungeon rotation crap then put good looking skins in the dungeons to keep people playing them. Make the skins rare and just let people go after them. Give different mutation levels different unique skins.

Of course I don’t mean that dungeons should be the only way to get transmogs. Everything should be transmogable.

Like others have said though… they have a lot on their plate so this is probably low priority.

They are a ways from doing this. They still have cash shop skins that have cloaks that bug out. Still has clothing that clips through objects.

Hey there! This is a commonly requested feature, however, as a small question, I’d like to ask. How would you like this to be implemented?

Would you rather this feature be an NPC where you pay in-game currency to change your items? Or something like a crafting specialization where another player can change the appearance of your items?

Looking forward to your reply!

Just copy World of Warcraft Transmogrification System and it is good 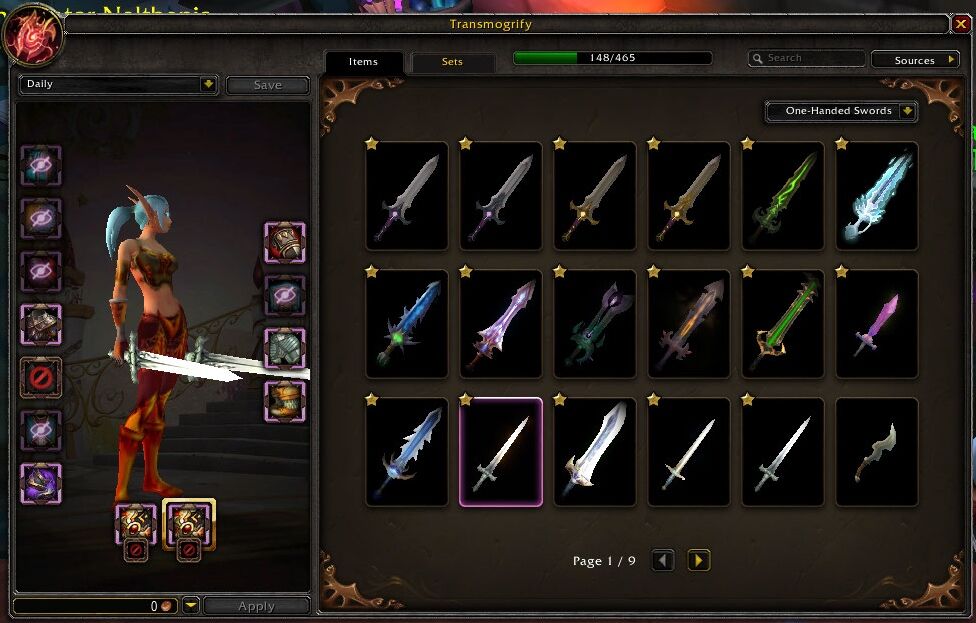 Transmogrification (commonly referred to as transmog, tmog, xmog or simply mog) provides the ability to replace the appearance of your armor and weapons with those of other items, or to hide certain pieces of armor.

I could go either way on the transmogs, but I prefer not to have to go to another player. I’d pay a vender for it without hesitation. I’d also be happy to see a system where all you have to do is find the item in the wild (so to speak) in order to “learn” to duplicate it as a skin. And unlike current skins, make it dyable so there is variety to players’ looks.

Agreed ! Created a post back then when I found a beautiful set that I can’t use sadly.

While doing a chest run (sigh) I found a really beautiful piece of armor… called “Forest Warden’s Hood”. [dddd] It looked really good and I was curious about what the whole set looked like… Imagine my surprise… It looks totally awesome ! Here it is : [ezgif-1-210d9ff3f8] [dsdd] Not only it looks awesome, but it’s also already dye friendly to put it in your preferred color! [dsadasd] The problem is that’s a 490 gearscore item and thus totally unusable… How many of those gems are hidden…

One way or another you should add a role for high-level crafters in the process. As in, crafters with “learned patterns” could create a transmog item that is tradeable, for other players to apply to their bound gear. Adds directly to the economy and supporting existing playstyles.

But it’s a must. Not really an option. It’s kind of ridiculous that the game shipped with this limited a scheme in the first place.

I like WoW transmog model. Once you collect the item it goes into its own UI and you no longer need to keep the item. Also, having the information to know where armor and weapon skins come from (expeditions, named enemy, opr’s) would give players more incentive to go and do certain content to obtain the skins. Another cool way to earn skins would be through achievements and titles. I recently got the “kill 800 named angry earth enemies” “Paladin of Terra” title, which takes a long time, and a title not a lot of people have. A cool incentive to pursue and obtain this title would be through rewarding skins, whether it be weapon or armor.

Transmogrification, or TAILORING could be another trade skill added, and something I know that every single person would work towards. A good way to increase this new trade skill would be simply by obtaining armor. Each time you get a piece of armor or a weapon that “schematic” gets added to a list of obtained and usable skins. I know that when I kill enemies and loot chests I constantly get armor and weapons. I wouldn’t make the TAILORING trade skill super xp intensive, but have the xp gain vary in gear score levels. Equipping an armor or weapon piece gives you a certain amount depending on the gs level of weapons or armor equipped. 600-500, 500-400, 400-300, 300-200, 200-100, 100-0, all give you varying xp with 600-500 giving you the highest amount of xp and 100-0 giving the lowest amount of xp. Again, the xp gain should be high enough for each gs tier that this process isn’t super labor intensive, but give players a challenge to work towards, and allows players in end game and just starting out the ability to TAILOR. This should be a process that’s available to everybody, and can be achieved by all.

Absolutely. Skin system is already there, just need to put the base game appearances into it.

Re: Centy’s post, I think having either option is fine. Have faction NPCs sell the item, plus have the options in the respective crafts-- weapon transmog item in weaponsmith, so on.

That suggestion about crafters can transmog change gear sounds intresting to me and in that way crafters get more unique and something new.

There should be an option with any item you acquire to save that look in your personal transmog inventory. Then you can go to a gear item to apply anything from the saved collection. That’s simple and a method that works for all players, no matter their level or skills. Players should not have to deal with designs they don’t want, so don’t auto-add every acquired item to the appearance system. It should not cost to change appearance at any time, but make acquiring an item needed to get the look.

This will provide a never-ending endgame activity for people wanting to collect looks. It will mean low-GS crafted items are worth making for their appearances. There are hundreds of item designs effectively wasted because they only appear on low-level items that never get worn. Crafters can optionally get paid to make appearance-gear for non-crafters. And more people will want to run lower-level expeditions for their pieces too.

Also I think it’s very important to fix the dye system. Some items are bugged and don’t change when dyes are applied. The shop items, Twitch Drops, and Prime Gaming skins also should be dyable. I know it’d buy more shop skins if I could customize them. It’ll make it possible to match pieces for a consistent look as well.

Or something like a crafting specialization where another player can change the appearance of your items?

PLEASE do not make the trade system any more complicated than it is now. Low-pop servers already have difficulty getting crafters. There’s no need to add gatekeeping that turns a positive feature into more content that most players will not get to use.

Or something like a crafting specialization where another player can change the appearance of your items?