Addressing what NEEDS to be changed

Another fantastic video from 5 Head Survival, a man with over 5 thousand hours in New World, and who truly wants the game to succeed. In this video he lists out all the things that need to be addressed immediately, with proper explanation as to why, for the game to succeed. This information is based on his own experiences, and from scouring the forums and compiling what the forums have been asking for for months or longer. 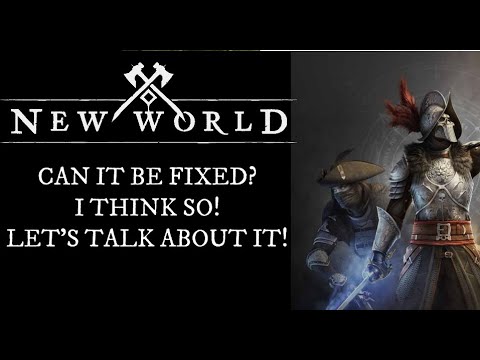 It’s a solid video. The part that stuck out to me the most is what a handful have been saying for a long time. PvP perks should not slot with PvE perks.

I understand that RNG is needed to burn mats and give people something to grind for, but AGS has messed this one up pretty bad. Players don’t chase a goal post they can’t see, and with our current crafting system, it requires people to light their time and gold on fire for a 1 in 2,000+ chance of getting something they are after just to be competitive in some cases.

PvE players aren’t going to chase full BiS crafts when they can gold an M10 with 3 2-perk ward pieces and a handful of ward pots.

PvP players are a bit different, but the system is set up to encourage gate keeping. This means players are forced to grind out an absurd number of hours just to be competitive.

I’m not saying gear should be stupid easy to get. I’m saying that the current RNG in this game is absolutely insane to the point that AGS isn’t even having the opportunity to retain most of their players. Pair that with the constant reworking of poor balancing and lack of foresight and you have people with 3-4k hours into creating their perfect setup just to have it be rendered obsolete. It’s a recipe for disaster.

Bugs happen. Rebalance is necessary. An absolutely unenjoyable crafting system that doesn’t reward players is not the play. The majority of crafting isn’t chasing gear, it’s chasing attunement crates. Attunement crates were a great way to make some coin before the market followed the player base, but even then we were abusing the system as it was the only way to make it profitable by using lesser materials and crafting gear that had ZERO chance of being used just so we could generate higher tier materials out of thin air and hope for a shot at the crafting mod we were after. That’s not “crafting”. That’s learning to make a broken system work for you in a way in which it wasn’t designed because the original intentions/expectations simply aren’t present in the game.