AGS blocked russian players? I dont agree at all if so. ( I am from germany)

I have spent a total of thousands of hours playing this game. Alpha/Beta/Preview/Release Version.
I have met a lot of nice people from many different regions during this time
Some of them are from Russia and they were faithful to this game even in the hardest times and always tried to improve it for the good of all of us.
These people bought the game as I did and invested a lot of time and now they are blocked because of political decisions?
These people have nothing to do with what is going on in politics.
I think gaming should be kept completely out of this and I have never seen such decisions after 25 years of gaming.
I now feel bad about even starting the game myself and I don’t think I’ll be starting it at all after tonight.
I could somehow get along with all the problems of the game and have always been active here in the forums trying to improve the game but such decisions of Amazon Gaming just make me sad.
We are just making everything much worse and Amazon Gaming should be ashamed to make such decisions and exclude such a large loyal community from the game now.
Just put yourself in the shoes of the Russian community and tell me how you would feel if from one day to the next, because of decisions you can’t influence, you simply can’t play games you love and have been playing for a long time.
@Luxendra did i miss something or are they blocked from now on? I also see some players from Iran reporting the same problems. I apologise though if this is just a mistake and they are not blocked.
I came across this post this morning where AGS answered and can only shake my head.

From midnight on March 22, it became impossible to enter the game from a Russian IP. Is this racism or a mistake? If it’s a mistake, how long will it take to fix? And if this is not a mistake, then I have bad news for you …

Man this is politics. It goes way beyond just “playing a game”.
AGS is not Ok with what’s going on, they cut their stuff there. As simple as that.
Just respect their decision.

Its just about playing a game then let them play the game.

Probably it’s more PR than politics and AGS does not really care about the situation. But well, sorry russian friends, you will have to bear the conseqeuences of living in a fk up country like anobody else.

Russians still can play NW. But how long?

I really don’t understand how games are attributed to what politicians are doing.
My opinion is that game studios should do what Riot games did.

If you want to help refugees, just donate % of the income from the in-game store.

Hi brother, one of the forementioned russians from Vega server here.

First of all, I’m glad that people like you exist. People, who think that games shouldn’t involve politics in any way, people, who don’t blindly hate russians because their favourite tv show and friday night news told them to do so, etc, etc. Thank you.

Secondly, I’ll clarify the situation for you. During the night of March 22 there was a temporal lack of access for russian and belorussian players, for like 6 hours. Only way for us to login was to use VPN. But in the morning everything got fixed and we were able to login normally. It stays the same way up until now. There was no clear announcement about this issue from AGS, just some brief and blurry explanation from Luxendra, which didn’t really explain anything.

Will we get cut off from the game later? Who knows. But considering current bleed of players, excluding a major piece of a playerbase from this game is a bad decision.

For the future, you don’t really want to start topics like these. I bet it will get closed really soon due to political context. Also you might get lots and lots of shit pouring on your head from angry political justice warriors. Telling it from my experience.
I have many friends and grandmom living in Ukraine and I’m aware of different things from actual people, not the news. I’m always open to conversation and discussion, but even I already gave up on trying to convince or at least provide any actual data to this community. So as a piece of advice - just ignore every salty comments towards you and just communicate either to adequate ones or to people this thread is targeted at - like Luxendra.

Just as an offtopic note, the most hillarious thing I’ve noticed in all of this shitshow - on our server, in couple hours after news about us being cut off from the game got spread, people started to do influence quests like crazy in order to take territories from our company for free. And these hours were soooo far from server peak hours, that it made me giggle. Well, at least we got some content for the next couple days lol.

Again, thank you and hope to see you in game someday.

This is actually great to hear. Blocking Games doesnt hurt the gov, only the people of the nation

I really dont think they are targetting or blocking all russian accounts. Well i know for a fact not all russian players are blocked or banned. My boy’s gf lives in russia and was able to play with no issues yesterday. I had them take a screenshot. She lives in russia and has a russian ip, no vpn or anything. And the whole situation with russia and ukraine sucks so bad but we really cant and shouldnt be talking politics on here, it gets heated very quickly. Here is a video i made with proof of her playing in russia, not the greatest proff but i didnt want her to show her name for obvious reasons. AGS if you dont want this video up, i can make it private, im just trying to help. 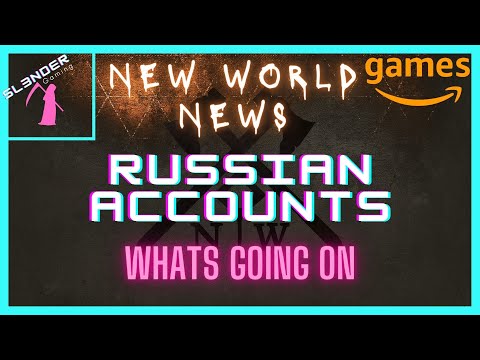 Russians arent blocked, some youtuber made a video about it and shown russian players who can still log in. So chill.

We already got a clarification yesterday from a russian player about this topic and he explained it very well. Read everything in this thread before you comment.
His name is Okar1n and you can read his comment.

AGS blocked russian players? I dont agree at all if so. ( I am from germany) Game Feedback

Russians arent blocked, some youtuber made a video about it and shown russian players who can still log in. So chill.

That youtuber is me hi!!! I can have her check right this second. She plays on the vega eu server and lives in russia. If anyone wants or needs proof that not all russians are blocked, let me know. I can post more screenshots. I just dont know how else to prove she lives in russia and can play just fine. Please people, stop spreading misinformation. Thank you Tonyo for this response, btw how does my bug hunter title and flair look??

AGS blocked russian players? I dont agree at all if so. ( I am from germany) Game Feedback

Hi brother, one of the forementioned russians from Vega server here. First of all, I’m glad that people like you exist. People, who think that games shouldn’t involve politics in any way, people, who don’t blindly hate russians because their favourite tv show and friday night news told them to do so, etc, etc. Thank you. Secondly, I’ll clarify the situation for you. During the night of March 22 there was a temporal lack of access for russian and belorussian players, for like 6 hours. Only way …

Hey there @Okar1n man this sucks really bad l. I hope whatever is causing this gets fixed for you guys. My youtube editor plays on vega with his gf who lives in russia and she can play just fine. The war and everything going on is terrible brother. I hate it so much. There are lots of americans just like me that dont hate russians for this. You have no control over what is happening over there and i just wanted to say hi from the u.s. and we still love ya guys ober there brother. Be safe and hopefully this all blows over soon.

Our favorite TV shows or Friday night news are not teaching us to hate russians. I believe the trouble leading to think that everyone is hating every Russian might have much more to do with YOUR favorite TV shows and Friday night news. Unless you have VPN access and actively seek the true state of things from news outside Russian broadcasters, you simply have no idea what so ever what really is going on.

Stopping genocide and very brutal WAR crimes against humanity is way more than “everyday politics”. If you did not know Russians have been excluded from almost all real life sports, air travel blocked to most destinations, trading in very many sectors stopped totally, big franchises and corporations pulling out from Russia. It’s not because of our Friday night news, it’s because the horrible choices your government has decided to make.

Everyone can very well understand that not every factory worker is shooting missiles, not everyone competing in sports are driving tanks, not every McDonalds worker is shooting with rifles. Idea of sanctions is to put pressure on your government to make sure they understand that what they are doing is against every single convention, civil rights and whatever agreement aiming to peace you can think of. For the lack of better word everyday russians are “the tools” to get to your government. Noone else can stop your leader(s), but the Russians. I know it might already be decades too late for russians to try to convince their leaders, but they will know that discontent is growing even if it can’t be publicly shown. Sanctions are the only way to try and solve the situation without actually starting a WW3 with nukes flying around.

Now should esports and online games be total exception to the sanctions and why/why not? I don’t know… But I know I don’t hate Russians in general, but my heart is with the Ukraine people. PEACE!