You do realize if you get hit by powderburn your nameplate continuously shows up right? Even if you hide across a bunch of foliage your nameplate can be seen and you can still be shot. Plus, lowering graphics settings doesn’t “remove” cover, it doesn’t remove walls off the outpost or walls off the fort.

But yes, I guess most people wouldn’t know the basic mechanics of how a musket functions which is why they assume such as an advantage. Despite the fact, regardless of whether you are on low or ultra settings, if someone is hit by a powder burn dot, their nameplates would be visible and can easily be shot through foliage regardless of your excuses.

Just the very fact that people would argue “oh you can easily see people hiding in foliage because of this” acting like people actually do this in a WAR? I have never personally, in over hundreds of wars, seen any gameplay where people “hide” under foliages to remain undetected?

Even while there are no nameplates as you are proned, do you seriously believe people won’t notice players prone on the ground with a GIANT HAMMER sticking out like a sore thumb sheathed behind their character?

Or maybe people complain that they can be spotted proning under a tree in an OPR when the objectives are to fight for outposts? What are you going to get done for your team by proning under grass? That’s right, nothing much lmfao.

Have you seen videos when the application in question, I’m not going to name it, it removes many parts of the maps which are purely visual and makes it far easier to see

You can’t really argue that it’s not an advantage.

I’ve confirmed one thing for sure, this application you speak of, does not need to be active for the graphic settings to apply. So you can’t really argue with me that you know what you’re talking about. Just the mere fact that you believe this program needs to run in the background for this to happen is already erroneous.

I’ve never seen the game run natively like it does with the application enabled.

Yes because you haven’t actually used the program to know how it works right? You don’t even know that the very simple procedure for this is no different than you actually going to your desktop right now, launching your graphics control panel settings and modifying everything in there to set your game to run for full performance mode with quality being set for max performance instead of the opposite? The software in question functions the exact same way but offers advanced features that are available to your graphics card.

Similar to how people overclock their GPUs, they restart their PCs, go over their BIOS settings and tweak their GPU and Memory clock settings there.

And out of how many gamers out there actually have the knowledge to manipulate their control panel settings?

The only real solution is to stop playing PvP in NW and go to a real PvP game where they actually care about such issues, don’t waffle and waste time with “we’re in discussion”.
Since launch, AGS has shown they don’t really care about cheaters and exploiters and would rather let the resulting gameplay experience obliterate their player base.

Stop playing PvP. Once the queues stop popping AGS will finally have to do something, or just delete PvP.

If you joined a tournament, and there were cheaters, but the organizers turned a blind eye to it or were unacceptably slow in responding… would you continue to get screwed in every match and be laughed at by cheaters? Or ask for a refund and leave? If you didn’t get a refund, would you still continue or play your sport elsewhere, in a properly run legitimate tournament?
Sure AGS should do more, but you can also have more self-respect for your time and go to a better managed PvP game.

This is no different than the Third party overlay tool called “Crosshair X” which puts a custom crosshair on top of your screen which AGS approved that it does not interfere with the game in any way shape or form.

Oh wow I didn’t know about this. I do wish New World though would let us customize our own crosshairs though or at least some like color and tweak the look some. Not talking about going overboard like in Valorant/CS:GO

Oh wow I didn’t know about this. I do wish New World though would let us customize our own crosshairs though or at least some like color and tweak the look some. Not talking about going overboard like in Valorant/CS:GO

I agree! It does suck that we can’t change crosshair settings natively in New world, but AGS moderators have consulted with AGS developers and confirmed that this does not “interfere” with the game in any way, though it DOES provide an advantage by having a better crosshair it still isn’t against ToS and this is confirmed.

Mind you this is a THIRD-PARTY EXTERNAL SOFTWARE, that literally puts an OVERLAY on top of your game to display a crosshair that’s not natively change-able ingame. Where most smartasses in these forums would argue “against ToS because it provides unfair advantage” the developers themselves have said it isn’t.

Best part about this is there are players who report exploiters for “exploiting” when they themselves also exploited. Funny how it goes full circle

Apparently it’s ok for “them” to exploit but not for them to get “exploited” on.

Yep I agree, the crosshair on the musket is atrocious.

On the side note, I am surprised that the screenshot with the comparison has some people I recognized from El Dorado. CHONGAL and Elyx are both musket users, they usually roll with their pre-made groups sometimes they use 4 man muskets with a pocket healer. Funny thing is I saw one of them say that musket is not OP when they’re always using it lol.

CHONGAL and Elyx are both musket users, they usually roll with their pre-made groups sometimes they use 4 man muskets with a pocket healer. Funny thing is I saw one of them say that musket is not OP when they’re always using it lol.

Well these two are obviously FPS players at heart, so they will play a weapon that suits them more I guess? Anyway, it’s not really upto us to decide what other people play. It’s not like I can tell you that you should play this or that because I can’t, that’s all you. So if they say Musket is not OP and they’re using it, it only means they are both good enough to make it work for them. Because if it was OP then you’d see half the game population using it which is not the case as AGS themselves have admitted that it is indeed the least used weapon in the game afterall…

From what I’ve seen a lot of MMO players aren’t used to the way the musket plays that’s why there isn’t a lot of people playing it. However that does not mean it isn’t overpowered. It offers a more challenging playstyle to people new to FPS but for regular FPS players it’s nothing new aside from the rapier getting away mechanics. A hitscan weapon is very strong considering the current state of PVP in NW, most especially to people who play with FPS. You can’t really say it’s not overpowered when the only counter to it, is other muskets which as I’ve said before alot of MMO players aren’t used to playing with.

All this not to mention the 2nd chances you get with rapier and the kiting capabilities of rapier. I’m also not saying that they shouldn’t play with musket, feel free to do so especially if they’re good with it. I’m just saying don’t claim Musket/Rapier isn’t a strong weapon combo in PVP just because a lot of other players don’t use it.

A hitscan weapon is very strong considering the current state of PVP in NW, most especially to people who play with FPS. You can’t really say it’s not overpowered when the only counter to it, is other muskets which as I’ve said before alot of MMO players aren’t used to playing with.

Do not confuse the word “strong” with “convenient”

These are two very different things…

Here’s a brief summary of why it isn’t overpowered:

Again, please tell us how the weapon is “overpowered” when it takes 5-10 shots to kill heavy players, potentially more than 5 shots to kill “medium” armored players (because of the amount of dodges you can make with med armor) and then finally, be able to kill light armored players in 2-4 shots (you can only 2-shot another player that has 5 con also running glasscannon, this 2-shot doesn’t happen to most light armored players with over 150 con as they need to get shot 3-4 times to die) and the interval between each shot outside tactical reload is 2 seconds unless you are using shooter stance which has a cooldown of 18 seconds (around 14-15 if you have refreshing stacked) but also puts you at risk if you play with it within 50meters of an enemy.

I can only assume you use it.

Let’s also face it guys, Muskets hit only for 2k average, 3k-4k on crit (but crit is RNG) and you can only force a crit from the 300 dex perk that has a cooldown of 10 seconds which means you can’t 3-4k crit someone to death from full HP (this almost never happens due to the nature of said RNG)

And not only that, you need to land your first shot as the powderburn so you can initialize your damage increasing talents/perks so you can now finally deal 3-4k crits.

Target’s gear setup: Imgur: The magic of the Internet

Video of the damage test 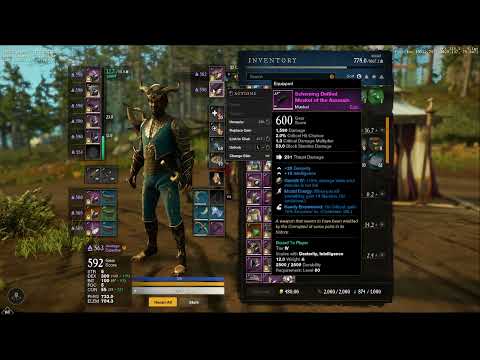 Now before you go on and tell me “You’re not wearing proper gear!” That’s PRECISELY the PROBLEM, that’s how you SHOULD test things, you don’t go and test with Best-in-Slot gear (oh no I hit him hard with a 625 infamy), you slap on a weapon that works with its main scaling stats, and then you hit your player target. You don’t cherry pick the best perks for the weapon just so you can see the best damage numbers it can deal, we are testing what an average musket player can pull out of his ass as soon as he picks up a musket (and we’re not talking about picking up a good musket, just any musket that works)

If you can tell me that this damage you see on the video is “overpowered” I want what you guys are smoking, whatever it is.

For a 300 dex 100 int 50 con setup this certainly sucks! Imagine not being able to play at 150 con and dealing this low amount of damage with a non-BiS setup? How is this seen as OP? A mage with 150 con, 300 Int can deal way more damage with a 600 GS firestaff from heavy attacks with fat hitboxes.

Again, before you comment anything about gear, you don’t have 625 gs weapons in the PTR when you do tests lmfao don’t even bother arguing about gear!

if it helps, there are people with 550GS BB used in Live PvP and can do much more damage than a Musket can and even 2-shot combo people 100-0 that’s what you call OP

making it extremely easy for musket players too see you

whoever uses aimbot hmu lmk where u get it from thanks

You can’t really say it’s not overpowered when the only counter to it, is other muskets which as I’ve said before alot of MMO players aren’t used to playing with.

Or just Line of Sight the musket… You know… like an MMO player or an FPS player.

This is the literal definition of an unfair advantage.