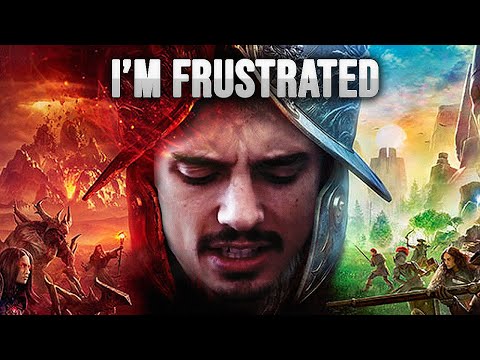 as a pvp player after watching his vid I followed and subbed on twitch as well as youtube, could not have agreed with what he said more!

I just hope if he has good feedback, he posts it on the forums like the rest of us so we can debate it.

What kind of asinine comment is this? He has made posts on this forum. no one cares that you havnt heard of him and were too stubborn to click a video. You certainly dont need to announce it, its just irrelevant feedback.

I’m not going to promote the guy’s YouTube channel. Re-Posting the opinion of a streamer is weak. It’s a new-gen gamer trend that ends poorly for games as it takes emphasis away from players on equal footing (all of us) and places it in the hands of someone concerned chiefly about likes/subs/money and not the game(s) we love.

You’re a gamer. I’m a gamer. I want to hear YOUR opinion. Whoever that guy is… he’s a streamer first, and a gamer second.

If he’s posted on the forums, cool. Share his post so I can read his thoughts. Thank you.

I littrally just posted about the ice gauntlet on this forum. I agree 100% with everything hes said, as i have said the same things.

Stopped in WoW, but he probably said what everyone said in this forum.

Lol, I just watched this commentary and was going to do the same thing. Post up on here for the dev’s to have a listen to.

The past few nights I have really felt the same way. I really enjoy playing a mage centric class, in fact my guild typically expects me to play this as well for pvp in any mmo… but the past month since the gutting of fire/ice it has been a real challenge to stay positive with feedback for the game.

I have played with other builds, fire/rapier, void,x, musket/rapier but none of them have stuck but playing fire/ice is SO FRUSTRATING.

I’m tired of the hammer/axes in pvp and I’m tired of them ignoring my the majority of my ice/fire skills, I mean people just walk through ice because they don’t see it as a threat at all, and the burst is gone.

The timing change on the heavy attack is crap, there also seems to be a problem with chaining them. It’s more reliable to do heavy light heavy than heavy heavy (as it never seems to go off as expected).

The timing change and root changes means its difficult to land a heavy on anyone in your ice shower.

The tick count on ice storm is stupid, this spell people just walk through now, it tickles.

The root of heavy freeze is a joke, alternatively - if you are going to keep it this way… please apply the same methodology to all CC’s e.g hammer stun… its AWESOME being chain stunned… NOT, or the vortex

Entombed - why did they change it so a healer cant heal you in it?! If you are going to completely GUT the hp to kill it why then double nerf it to the ground and not make it so a healer COULD heal you in it. Granted if the hp was too high - the current hp change is excessive. People sneeze on it and it breaks.

“I didn’t watch it but I hope he types it out”.

However there are certainly some issues. Almost every company on servers think wars should just be 38 GA/WH with 12 healers. Seems every type of range class is being rejected based on results as companies that hold EF/WW only deploy these loadouts

The only thing that is objectively wrong about this video is the part where he says every other weapon has more CC than IG. False. LS has zero CC.

It’s more reliable to do heavy light heavy than heavy heavy (as it never seems to go off as expected).

I’ve had that happen too many times as well, I completely agree.

You shouldn’t be able to 1vX anyone ever. You’re complaining that you can’t solo multiple players. That’s not an argument.

You shouldn’t be able to 1vX anyone ever.

So you’re saying the outcome of a fight should be dictated by the number of players every time? That’s incredibly boring. A fully end game geared good player should absolutely be able to beat 2 fresh level 60s that don’t know what they are doing. They shouldn’t just win because they have more people.

this is the weakest comment ever. Imagine thinking it should be impossible for someone who is skilled and actually good to kill multiple players who are not. Man you people blow my mind with the horrible takes

No, the game should be balanced around a minimum of 5v5. If you try balancing around each weapon combination being able to solo three others players, you’re going to have a bad time.

I think we all would be happy for ice to kill a player, as it stands today it is completely broken. The damage output is sub par, the cc has gone, the survivablility was nerfed to the ground.

Melee just laugh at mages and left click spam to win… time they nerf that lunge and the damage output on GA/Hammer and bring it into line?

OR remove the 3s root on gravity well and change the hammer stun to 1sec with a 5sec immunity.

No it’s not. Being able to solo three other players doesn’t mean you are good at the game. It just means your build is OP, so your build got nerfed and now you are crying on the forums.