Banned twice for one joke ;/

From the beginning of its launch, New World was a very promising MMO. Starting with over 900,000 players the game was on track to be the next MMO that would last years. With this many players the staff became very overwhelmed, they could not keep up with the exploits that were being found every waking moment of the game. This deterred many players causing a fall-off of the concurrent player population by over 600,000 to this date. With a now dare I say sinking MMO it becomes critical to cater to players who still see the games potential and put their faith in the remaining staff to save the game.

Rumors began to spur of a “mass-report” function of the game where a large group of players would all spam report a targeted player in order to remove them from the game, whether it be for any particular reason or it be out of pure discontent for a player. This very system has abused since the beginning of the game. Now, AGS claims to “investigate every reported player” although it has been proven time and time again that mass-reporting will undoubtedly ban players automatically regardless if they violated New Worlds CoC or not.

Even worse, the players who receive a ban either have to accept their verdict or go through the atrocious ban appeal system. This ban appeal system can take a day to weeks for a reply. These replies also seem automated as it seems they will just pull a violation out of a hat and copy paste you a response.

When reaching out to live support the answers are very inconsistent, they remain as vague as the appeal replies you will receive. The AGS live support will vary in how much they claim they can do for you, some will simply link you the appeal link whilst other will help raise a ticket of their own to moderation. Some will tell you why you are banned and others will claim they have absolutely no access to the information AT ALL. Some will tell you that they have no way of direct communication with the moderation team, while other tell you to “wait a moment while I message the moderation team.”

I play a low-pop server, generally anybody knows everybody it’s almost a small village if you will. One day we were joking in global about gold sellers and my poor sense of humor thought it funny to taunt another player complaining about the excessive bots by saying “WTS gold for 3.9 USD use code NYC for 10% off.” That’s it, no link, no communication from other players and no shady amounts of gold flowing in or out of my account. Later, I was banned for “abusive behavior”. This started the snowball of my terrible moderation experience that would ensue. I would write several appeals only to finally have it finally be reverse 6 days later. The answers would be different every time it was rejected. Every answer would be a rejection for a different reason saying I violated the CoC in a different way every time. Now from this you can probably concude that innocent or not the actual “investigation” never happened it was a roll of the dice if you get unbanned or not.

Thinking that this one ban was a rare fluke in the system I returned to life as usual. After being banned for 6 days I had to catch up in the game, I participated in every war/invasion/dungeon that I could. I ran elites for two days and crafted my life away. During one invasion on my companies own territory we had level 50s signed up that are notoriously known for griefing invasions. These players would stand in front of the siege engine generator and collect the repair parts with no intention of using them to help, only with the purpose of preventing other players from using them. I of course had to remove them all from the invasion to prevent this from happening not only to protect my territory but to prevent them from ruining the “New World experience” of other players.

This in took a turn for the worse, the players ended up mass reporting me and this can be confirmed by a screenshot of one of the players ignorantly admitting to it in global chat. I was banned two days later for “abusive behavior.” At this point in time I had no idea what I was actually banned for. I submitted an appeal trying to inquire about what triggered this ban but I received a generic response of why I would remained ban. It was only until a day after my ban that my friend would send me a SS of the player admitting to mass-reporting me. Now from this I appealed with the screenshot to prove that it was a false ban from their easily abusable system, still no rectification. It would take a lot of live supports for one of them to confirm that it was a mass-report and it would be a week until one of them would tell me that the main reason I was banned was due to “gold-selling” the thing that I was already pardoned for. I then provided an appeal basically saying “Hey this is a mistake, here’s the original email from being pardoned” I explained how the system banned me and I was being held against something already appealed.

None of the moderators did due diligence, if any of them even attempted to do so it would be done and fixed by now. Within two days, according to moderation I was able to violate every CoC they have ever written. In reality, I was only farming and sent maybe 3-4 lines of chat to trade and no more than that.

To this day I remain banned almost accumulating a total month of being permanently banned. I only write this article because browsing every forum available you can see a handful of players who still want to play the game that are in the same situation as I. 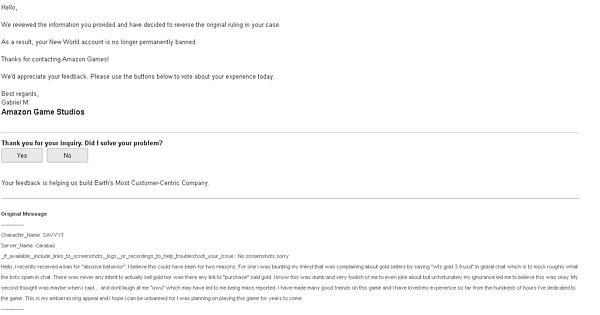 a player admitting to mass reporting me: Imgur: The magic of the Internet

A AGS live support agent confirming that I mass reported

“was being reported by quite a few players”: Imgur: The magic of the Internet

Another AGS live support agent contradicting the one before him: No mass report - Album on Imgur

Here are the various replies I received from moderation in reply to my ban appeals.

“spamming and gold selling”: Imgur: The magic of the Internet

“disruptive behavior”: Imgur: The magic of the Internet

“abuse language”: Imgur: The magic of the Internet

“cheating”: Imgur: The magic of the Internet

“gold selling” Imgur: The magic of the Internet

“abusive language”: Imgur: The magic of the Internet

Now you can only imagine my frustration knowing my side of the story. Still I remain banned and the moderation seems to be set on keeping me banned after “thoroughly investigating the situation.” How many times does AGS have to contradict themselves to before deciding to own up to their atrocious system and stop attempting to save face.

This is the only place I can post about my experience because they immediately have you banned from anything New World related.

As of now, AGS seems to be taking no action in terms of saving innocent players such as myself from these systems.

Any player with hundreds of hours with one small understanding can all of their hard work and progress taken from them with no chance of rectification.

It is truly sad to see a once promising MMO fail in the aspects that it has.

Character Name: SAVVYT
Server/World: Carabas
Banned: 11/03/21
Hoping for a solution soon. Will keep this forum post updated.
I understand the joke was out of taste resulting in my ban and it won’t happen again.

From the beginning of its launch, New World was a very promising MMO

What does this have to do with you being banned?
Instead of writing a fictional novel, you’d best try to send a ban appeal here:
https://www.amazongames.com/en-us/support/new-world/articles/appeal-a-ban

I’ve clearly sent an appeal if you read the entire post and its not a fictional novel. The purpose was to explain is that clearly things are not going as positively as hoped and there are room for improvements as the declining player base indicates exactly that.

What does this have to do with you being banned?

“There are no stupid questions” - Sun Tzu/Master Oogway probably

From what I can see of your case, this should be elevated and addressed by someone in support right away. The gold issue alone is somewhat troubling on a more technical level. Their AI is very poorly calibrated if it is auto banning a player who has invested silly amounts of time already into an account. Gold sellers typically use new accounts because they require no work in getting spam going - low risk, high return. Your account should have been marked for review by a human who could see that you randomly wrote one line once and realize you aren’t an actual gold seller.

The mass report is a similar problem where there should have been human review before a ban of any sort was given. Furthermore, I would make it policy that such behavior warrants a counter suspension on the reporters for wasting time to deter such behavior. FYI to those who don’t get it, removing people for whatever reason is the right of the town owner. They don’t need a reason, they can purge as many players as they like, especially since the game gives the leader a button to do so. Frankly, allowing players to randomly be invited into invasions is poor design with how difficult the content is tuned. Unless invasions get dumbed down a lot (which they shouldn’t), developers should instead make it so that a town leader can pre set all 50 people (like a war) and remove all these other problems in the process.

Let me note at the end here that it is painfully common sense to NOT make gold selling jokes in MMO’s. I’ll also add that it is possible that this individual did other things to warrant a ban. Perhaps he hasn’t admitted to saying many awful things in chat, for example. Regardless, though, I would appeal to the higher ups to sort this matter out and use it as a case study of what to do and not to do with cleaning up bad behavior.

I hope everyone is doing great!

I’m sorry to read about what happened to your brother with the ban. I would like to tell you the reason or give you further information but we don’t have access to that information.

My recommendation will be to send a new appeal through here Appeal a Ban - Support | Amazon Games and try to explain everything correctly including your past contacts. Since you already did it, you just need to wait until the team in charge of the appeal review your appeal and send you the answer about it.

Please remember all that New World doesn’t have auto-bans or auto-reports and the correct way to get the ban out is filing the ticket in the link I attached previously, contacting through chat or any other way will not help cause as same as us they can’t see the information about the reports of appeals of the ban.

Also I gonna take the feedback about it to escalate it

Hope you all have a great day!