The reporting system does nothing. Unless a company mass reports you to keep you out of a war. Or get you temporarily banned.

These bots are virtually known almost by name on our server. You can toss a name out in Global and people will so “Oh that’s the Starmetal Bot in Cleave or the Wyrdwood Bot in BW”.

I’ve even seen level 60 bots which is further proof nothing is done. I would strongly estimate 10-15% of this games population is strictly bots.

Here is my favorite Battle Bots in Brightwood. all running the same location, all with jibberish names, all running hatchets (Defy Death bailout), all without a faction, all doing sharp jagged movements.

Enjoy! I’ll try to regularly update this with the clusters of bots I run into. 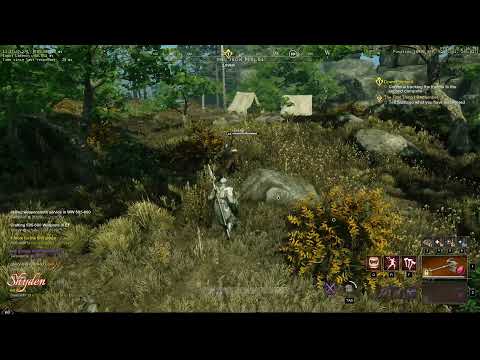 While I’m sure bots is nothing new to many people. They are also pretty common on this server. I’m really just amazed, how long they last before they are removed. It doesn’t take a rocket scientist to see these are all together. [image] I’ve noticed whoever runs these sets of bots likes to put them here. [image] I started reporting these weeks ago, and while some of those accounts my have been banned, they are quickly replaced. This person/company is still up to it, dropping multiple bots i…

Yes they are check this out as well

#FixNewWorld
The developers are completely incompetent, the reporting system does not work completely, the bots have been alive for two months.
English is not my first language, so it may contain errors, sorry

Thank you, this is just very sad and unfortunate. Falls on deaf ears it seems.

It looks like the same type of bots I’ve been reporting on Yggdrasil. Same area, also factionless. I’ve noticed them when they were level 40. Two days after they hit level 60 they moved out. They are still online just not sure where.

Bots are ruining the economy on my server. They’re camping Orichalcum spawns and running routes outside almost every major city. They’re driving the prices behind almost all basic crafting materials. They’re wrecking the game and reporting them doesn’t seem to work. Seen the same group outside Windsward for two weeks now and nothing has been done.

I’ve completely given up on reporting them because there are so many and they go unbanned for so long. Based on observation there are ban waves, the problem is these waves are too infrequent or AGS is unable to keep up. My block list of reported players all drop to offline status the same day & I never see them online again.

Even the developers have abandoned fishing in this game because of bots. I mean my god look at the Aptitude reward for fishing.

For crafters, there is one upside. The prices of some raw materials remain low because of them.

Aptitude reward for fishing? Did not hear about it…

Not Receiving Package of Specialized Fishing Materials Bugs and Exploits

****** Please make sure you fill out the following information before submitting a report ****** Don’t forget to check the Known Issues List to see if your issue is currently being worked on by the dev team. We also have existing workaround for some issues that you can find here: What is your character name in New World: Souls0001 What server/world did you experience your issue on: Ohonoo Describe the issue you are experiencing: When getting one full level of aptitude I did not receive a Pa…