Well… a character that stays in the same 10 square meters area all the time outside the city is a gingantic red flag. Should not be difficult to monitor server side the player position and deploy a simple script that triggers a human action to perform some verification.
Just remember the game is B2P, once cheaters understand that they lose money, they will stop.

I am going to try the going prone trick to move them out of the ore location.

Puzzles for fishing and such is why i left BDO. I just wanted to fish, tame a horse, etc, not do word puzzles.

I agree puzzles is not the answer… We shouldn’t have to jump through hoops for this as players to be fixed. The issue is NO ONE and i mean no game company since ive been playing games some off of 15 years now, has ever invested any real money into anti cheat / botting detection.

They out source to third party companies that do the bare minimum, aka injection detection which REALLY is out date an does not work. Bots now days are AI that LOOK at your screen and based on what it see’s makes a click etc in that location.

Example, You set it up after you mine a node. When bot program see’s something appear on screen that was not there, it clicks and that click mines that node. Granted im no expert so i couldnt explain ALL of it to you, but thats the jist i gather so far. Its all copy, once someone uses the bot to mime what they did once while programing it, it will continue to do the SAME exact action it was programed to do acting as if its legit clicks and or keystrokes when its not its just a clone.

Amazon game studios we REALLY need you to focus on this above all else or this game truly has no future… An it PAINS me to say that because i LOVE this game currently and its such a nice breath of fresh air away from another MMO company who has ignored us an treated its player base like garbage for years… Please learn from them and dont follow their foot steps, we all know who im talking about with the big blue logo.

Found some more fishing bots today, just spamming cast an reeling it in, no company no levels no gear just beach gear and not a care in the world. Rule of thumb where there isnt many mobs? theres a bot it seems.

Agreed!! Caught one today. Player doing something else while running the script. I did try to have fun with him. See what happened in video below. 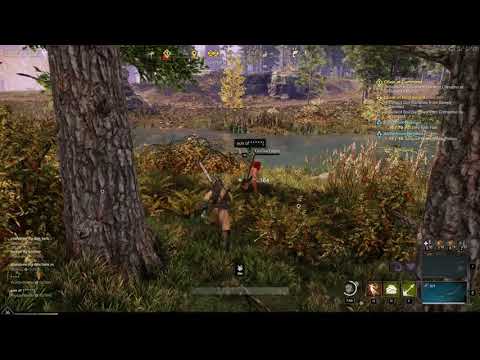 Atm is almost impossibile to farm iron to be a crafter, it ruins the game for me, I love to farm and craft items…

The fact he just said “so” says it all, we NEED accountability for these bots and HARD stances at that. No “Oh well we’ll suspend them for a month or a week” no we need hardware bans PERM so they cant even re create an account short of replacing their computer aka making it unprofitable to do so anymore.

Very sad to see no updates for bots in this new patch but I was incontact with support recently. They claim to have forwarded this I formation to the dev team so if next patch rolls around an we still see not so much as a reply im going to get really worried as I think we all are but let’s hope for the best, share share share this post get ur company to comment etc lets push this issue hard boys.

There is new official info about this

@TrevzorFTW in regards to the recent post on bots, removing keys is not enough. The same iron bot iron888 has been in game almost since launch and has been mass reported multiple times yet continues to farm freely.

Revoking keys is not dealing with bots who just bought a legit copy of the game. This iron bot has even set himself up to swing his sword and block every min or so to avoid standing in place detection that seems to be in for fishing bots now.

Bot makers will by pass this fix in a matter of days, so my question is this. Is there more in the near future pipeline for a hard hitting respones to bots or is this what we get for a while?

I or no one else is ungrateful for the first step, but we want to make sure it isn’t the only one. Bot makers are crafty and pressure has to be applied heavily to keep them down.

A new aimbot and esp has just been dropped… this is getting really out of hand. Every clown in this screen shot video needs banned on the spot and new world team you need to investigate this.

Attention Adventurers, We have seen your reports of gold farmers and bots in the game. We take these reports seriously and we want you to know that we are committed to ensuring fair gameplay. As part of this commitment, we are taking steps to revoke thousands of keys that were fraudulently obtained to disrupt gameplay. If you believe New World has been removed from your Steam account in error, which is possible, please contact us here (links: Contact Us | Amazon Games) to correct this issue. …

Here, all they did so far was take away stolen keys.

What if you can only fishing,harvesting or mining etc… while your pvp is open? we will be able to kill those bots also they can manage the lifeskilling pvp is never gives you weapon exp and level exp so nobody can abuse it.Yes maybe this will be unfair to people who is not using bots while lifeskilling but till they find better solution they might work , no?

This would alienate to many pve and crafter players and send them packing so I don’t agree with this solution.

However a system that force flags bots somehow is a very good idea, allowing them to be killed by pvp or non pvp players if they haven’t left a certain area for an extremely large period of time it within say 30 meters of the same spot for 3+hours.

I see no scenario where a legit player stands within 30 meters of the same spot for 3 hours or longer. You could even add a bag drop so players get incentive to kill the bots by getting their loot within reason say 10 to 15% of it incase they’ve been farming all day cant have 1 kill earning say 10k iron for example.

I think I’ve stood in the same place fishing for longer than 3 hours before so it’s possible! That aside though, they’d just program the bot to walk 30 meters after mining the ore or after x amount of casts or whatever. It would be a bandaid for a day at most until the programmers of said bot fix it.

This is an issue with static nodes, if nodes were added in a procedural generated way I think this would solve a lot of these bots that just compare whether pixels are currently present or not and perform actions when they are. Since I think EAC has got the memory side of things covered, the static stuff just seems the problem to me.

Yes bro your idea is better, to be fair for non bot user players.

On Diranda right now outside of Windsward is 7 characters all with names like " wssalsldfjg" automated fishing. All at once. One dude? Nah.

Its blatant, they don’t even care. And its 100% a gold farmer because WHILE HES DOING IT HES ADVERTISING 1k = $4.

Amazon needs to have a no tolerance stance. If you receive reports of someone who is selling gold, and you can check their log and prove it, ban them. 100%. BAN THEM. You gotta hit their wallet, and frankly, if they want back in they will give you money to get banned again.