After uploading the video, I realize these bots check to see if it can interact with an unavailable node twice each time. 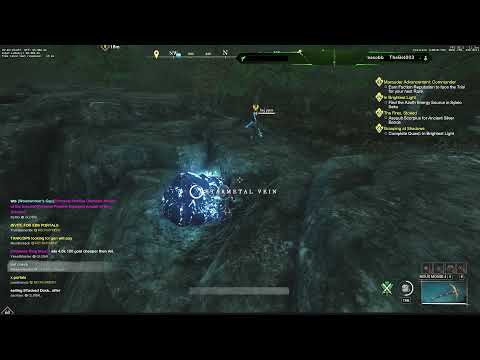 The botting is really starting to do our heads in on Valhalla. How can the devs just not see they are bots. Any level player can tell a bot from a real player its really not difficult.

I saw AK47 2 standing in WW just then so typed its name into the friend lookup… the image below shows the deal. I mean c’mon its pretty obvious right? yup, it doesn’t take much to recognize a bot, and it’s not okay for a company to let stuff like this slide. I think what we wanted for christmas and new years was a functional game, not winter event.

There are more and more bots I see everyday too. Today I seen a set of bots with the name of something like fgfgfgsgfghsjh. Both of the names almost identical. Both must run the same macro or something because they ran the exact same path like a second apart and hit the same exact tree every stop. One was chopping it the other did the double try to chop it.

Lets go AGS. Bots are not hard to see and ban. It should not take weeks/months to get these guys banned.

sorry to hear, we need to speak up until AGS gives us a solution and not hold up until they fix this epidemic.

People have been since launch. It does no good. I would think AGS would be on top of this. Not only does it make people happy to see bots banned but AGS would sell more game copies to the bots after they got banned.

most bots are using illegal game copies, either through generated keys or from stolen credit cards purchased on onions.

AGS got your 40 bucks. You think they care anymore ? Lol

even with a million copies sold, if they lose all future business and gain a bad rep, yes. Because they won’t be able to profit in the future.

The people in charge of this game already have a horrible reputation. Look them up.
They give zero Fs

This was their first “success”. 100% they want to redeem this opportunity.

Dumb post, every patch is a proof that youre talking bullshit - even when patches arent good sometimes.

right, because they invested time and resources, which means money spent on trying to redeem this game.

I reported a bot almost a month ago… It was level 17. It’s now in its 40s, still running around getting motes and Starmetal.

If it takes this long to ban a bot, it’s too late. The damage has been done. They’ve harvested thousands of materials and flooded the market with coins and materials.

It’s why we need to actually be aggressive with making it a point this has to be fixed. We need to stand up and shout as much as we can so they can prioritize this over what they want to invest into.

How many players would the game have without bots?

They need bots and gold sellers for the player numbers.

The problem are Bot farmer take place and on high population servers people can’t join or move to because it’s full. If you get rid of all the bot farmers accounts, more real people can join and have fun.

I’ll link you to a thread I’ve had going all week. All the bots I cover some a few days old, other a few weeks old, are still in game, after multiple reports.

While I’m sure bots is nothing new to many people. They are also pretty common on this server. I’m really just amazed, how long they last before they are removed. It doesn’t take a rocket scientist to see these are all together. [image] I’ve noticed whoever runs these sets of bots likes to put them here. [image] I started reporting these weeks ago, and while some of those accounts my have been banned, they are quickly replaced. This person/company is still up to it, dropping multiple bots i…

Yup exact reason they need to fix these basic bots

You know I’ve see that exact same thing happening I report them then check my block list from time to time to see if AGS has done anything cause they are legit ALWAYS online.