Bow needs a nerf or adjustment

Bow hits way too hard, the bow boys are going to come here to defend their broken weapon… IF you guys are going to let the bow hit this hard at least nerf the hitbox its way too big and nobody ever misses a single shot, im 5 resil , 5 ele aversion plus some elemental ward gems with 35% thrust reduction damage and this weapon still hitting me for 5k… not to mention the RATE OF FIRE OF SHOOTING ARROWS… how is that possible? by time musket is done reloading bow already got me 10% with how fast it can shoot… its crazy

Cause bow/spear is fun to play. The perfect combination for close quarter /mid range combat.

bow is not the problem, lets rather talk about muskets.

bow is not the problem, lets rather talk about muskets.

musket is not a problem… there’s ward to reduce musket damage… 200 con, thrust gem, elemental gems… normal hitbox that if u are OFF BY A PIXEL IS A MISS, 3 second reload for every shot, lets not talk about all the bugs we gotta deal with… the only people we do good damage is the returning players that dont have gear … u can always zigzag, jump, lay down roll over to make us miss… because like i said… IF WE ARE OFF BY A PIXEL IS A MISS, bow’s hitbox is the size of a house, u cant do any of that… so sounds like u need to get better at not walking on a straight line.

Because its super easy to get your 3k points and go home with a bow. It’s not like most of them are any actual help to their team.

And yes, I’ve been on both sides of that equation

All the same can be said for bow. Agree lets not talk about bugs since that is not a ment part of the weapon.

Musket is the problem, a far bigger problem then bow. You go out the door and there is 10 musket players shooting you and this game feels like a bad copy of cs some times.

both bows and muskets are broken. idk why theres always a discussion which of the both is more broken. both are. and both dont really fit the game (imo) and should be looked at. but this is never going to happen.

Because its the easiest way to get high score but due to its single target weapon its weak in small scale fights ( if yoo have too many of them) but in healthy numbers bows are very usefull. Now lets talk about FS/IG build it is not OP nowadays?

Lets drop the nerf culture and instead buff other things. Unless we want to eventually run around and wave feather dusters at each other.

This guy has been moaning about bow for nearly as long as the game has been released. Check out his post history, it’s the same thing every post. Maybe pvp just isn’t for you.

Honestly bow is in a good place. It feels fun to play. has a nice ability kit. Deals satisfying dmg.

I think we should take a look at bringing other weapons in line with the bow. Like the INT weapons.

Firestaff is slow and clunky, you are RP walking for an hour after using a light/heavy attack. the damage per second and stabile output dmg is not in line with the bow. Hitboxes are not in line with bow either. Shooting a firestaff heavy/light is like shooting needles. Especially when the ping has a tantrum.

Void gauntlet is dogwater and is jsut a debuff weapon.

Icegauntlet is fair but I absolutely cannot stand how it feels to use it. The light/heavys of ice gauntlet feel so nasty to use that I never use that weapon even if it is good.

The bow is fun to use, feels good. Lets bring every ranged weapon in line with the bow.

Except for the musket, musket being hitscan needs to be changed to projectile. Right now its just annoying

Bow is a symptom of the meta. AGS locked the PVP XP behind 3k score and made damage the main score generator. If you don’t have a pocket healer the best way to farm points is to sick back and shoot arrows(or musket) at people and farm your 3k without dying over and over.

Change the scoring so ANY TIME you are within a fort or on it’s wall you are scoring points you will see the bows become less and less, not gone entirely, but not everywhere.

Changing the score this way also promotes a better game mode. If you are on a team rolling over the enemy, you are basically forced to go spawn camp to get points. There is no benefit for defending the forts points wise.

I’m absolutely happy with struggling vs good bows up close.

The hitbox feels like a very band-aid solution to bow. I miss the old bow sorta since it had a higher skill cap but was also very frustrating since the shots didn’t go on the reticle. The travel-time + animation parallax causes distorted bow shots. For example, try shooting while strafing left and right. Since the bow fires from your side and not from the front of body, you gotta make a slight adjustment every time you shoot. Hope they fix that soon.

Both bow and musket can be deleted from the game and the majority of us would throw a party. Both musket and bow have very little animation to 0 when it comes to firing the weapon. Compared to the other ranges weapons having a slow and telegraphed (with audio) auto attack. While also having maximum range.Bow players can charge a heavy and fire into an instant pen/poison or rapid shot, doing huge burst if it lands. Muskets sit on the other side of the map all game doing 3-6k damage per shot. Both weapons can apply staggers and slows from across the map which is just freaking obnoxious. Bow projectiles on low settings are basically invisible. Muskets and bows ruin the game completely on multiple levels. Just the other night I was ques into a match in progress that had 2 pre made musket/bow groups on the other team, plus the randoms that qued up. There was like 6 bows and 8 muskets ON ONE TEAM.Time and time and time again 1 team or both literally gets anywhere from 5-10 bow/musket players The game is simply unfun to be constantly pelted by bows or muskets. Step out anywhere into the open away from the Zerg and a bazillion projectiles start flying past your head and pelting you. Sometimes it’s an easy win but it’s a frustrating easy win. Sometimes it’s not an easy win, sometimes it’s just afk in spawn kinda game because everywhere you go, you just get pelted by multiple bows and muskets. Especially when you run into an enemy 5 man of dex snipers all in coms targeting the same person. Even if you manage to get on top of them they will just pop rapier and just run away to safety. Bow and musket get perma haste paired with rapier is just a pointless chase.the only people who defend bow and musket are the people who main it. 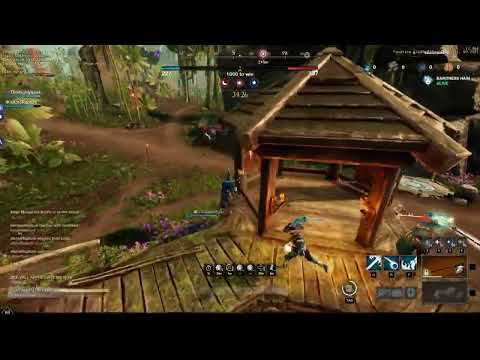 This is just a glimpse. Imagine having the whole team on us with the rest of the bows and muskets. Simply not fun to play.

Void gauntlet is dogwater and is jsut a debuff weapon.

It’s worse than dogwater and needs to be fixed.

nobody ever misses a single shot, im 5 resil , 5 ele aversion plus some elemental ward gems with 35% thrust reduction damage and this weapon still hitting me for 5k…

Can we just insta delete any posts that contain this kind of bullshit? Ive been using bow since march and i dont think i have ever hit someone for 5k

and if i have they were probably low gs + low con and so on. The most i ever hit people for is 4k and thats when theyre dead anyway, i just get extra damage from passives that boost damage on targets under some amount of health. So at that point it doesnt matter if i do 1k or 1000000 million damage, they still die

Stop spewing bs and get good

I used to think this till i leveled it up myself and got good gear,

It takes alot more skill to actually land shots and when people pressure you its alot harder then you think,