I have been playing the bow for 1.3k hours and the last 1k of those hours I had tons of fun. I am not to sure what happened since but I am 350 Dex 100 Con (Light Armor) I am not only getting Stat checked to medium mages (Fire Staff). For example: I will use the damage buff off of a roll, with the poison debuff and lets say hit for 1k non crit 1.3k crit, they will light me for 1k-1.2k and heavy for 1.3k-1.5k. Therefor they rapid fire with lights due to them having a better Firerate and you lose the duel. Going against a heavy melee, I only hit for 900, I realize they are in heavy but seems kinda low. Another grievance I have, in war. If you shoot any of your abilities on point, it is eaten by a friendly Maelstorm or a enemy one. Is there a bug going on with the bow or a nerf I missed?

I realize they are in heavy but seems kinda low.

It’s not. I do that with spear light attacks without rending on heavies. It’s hard to tell though because of mutators you never really know but gems people have slotted. + Physical aversion is in the mix now.

It is a little rough, since a ton of people will run Onyx and if some people run Physical aversion.

Yeah. And it’s about to start stacking…

It sucks there is no way to work around all the phys restistance stacks, like how the int musket does.

time to switch over to mage until they start stacking elemental aversion… or just join the bruiser fold and run GA WA like the devs intended apparently.

a little frustration because i have spent thousands of hours and materials to get my BiS Bow, and armor. Now I have to wait or dump more money into a new build due to the bow being even less viable. Tragic but I still love NW as a game and will just restart. Gives me something to grind towards I guess.

What idiot plays this game with only one weapon? 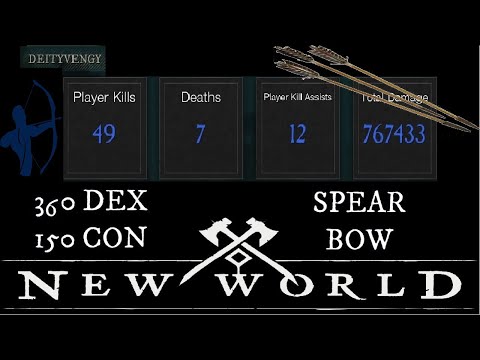