Is this an intended mechanic or is it a bug that people are exploiting? ((player jumps and fires just before feet leaves ground))

I have not tried this myself due to feeling as if it’s not intended, and I refuse to try out things that appear to be exploits. I’ve heard a lot of ifs ands and buts about this mechanic. But just to stay clean, I wont bother.

Does anyone know if this is a known issue or is it normalized as safe/fair use? I’ve seen several threads and posts elsewhere, aside from this forum, there are already AHK macro scripts for new world and this bow shot is in there, among swing timers being as fast as possible 100% of the time, weapon swap macros, and other timer based action.

It’s already against ToS to use AHK for macros while playing NW, I’m simply wondering if this popular bow jump shot is among things to be fixed or addressed properly by the dev team.

Rumors: It reduces hitbox- brief invulnerability- immune to fall damage and other damage types while properly performing the aim/jump technique- speeds up the time to shoot back to back

I understand the basics and more advanced animation canceling styles, most of which are 100% intended and gtg for fair play, however This feels like it’s unintended due to how goofy it looks, I doubt that’s what they wanted archery to look while being competitive or otherwise. Just looks odd to see people doing this, and even more upsetting- having it on a macro.

Would love to get confirmation whether this is intended or not. If it is a intended mechanic than it would have to be mastered to be competitive with the bow.

Would rather not spend time getting used to the play style if it’s going to be removed.

seems like it’s not intended simply because it looks idiotic and breaks immersion.

yeah it just looks so damn goofy when they do it, I doubt it’s supposed to be played this way :S but I would like to know from the designer.

Agreed please let us know if this is a skill I need to learn.

I don’t like doing it, but it definitely doesn’t need any macro. It’s pretty easy.

yeah jump shot i feel is not a bug.

I do it rarely only cus sometimes it can hurt you more than help you. But as diego5 above said, absolutely in no way need a macro to do. It is very easy.

Butttt i have been jump shotting more often lately because:
the bow is buggy and clunky right now, jump shots almost help it not be buggy , it feels more smooth when doing the jumps. That’s honestly a problem. But bow has multiple bugs right now and so it’s a way around them. Buffer windows can hurt consistency in shots causing unresponsiveness and hip shots, and the jumps remove those problems. Fix the bow gameplay and i will never have to jump again.

Can confirm that this is something that can “EASILY” be done by anyone that has half a braincell and more than 1 hand.

This action does not require “macros” to be utilized and is something similar to Dodge-recovery animation cancelling where you sheathe your weapon to cancel the dodge recovery animation which is, per the dev team: an “Intended” mechanic and part of the game.

This jump shooting thing looks funny as hell and it does not require any special type of pre-requisites other than not being physically handicapped and just knowing how to time a jump after shooting an arrow.

Nothing “Needs” a macro other than the extreme weapon swap double fire staff crap that happened a bit ago. aside from that, there are still macro scripts for AHK that can be found for attacks to be performed at the fastest speeds you can possibly do. if you ever just spammed left click for light attacks, have you noticed if you actually try to time the animations, you can swing MUCH faster? macro’s will net you a 100% rate on executing the perfect swings every single time. that’s a problem. Anything that removes a skill gap is garbage imo.

AGS said they want an immersion experience with all weapons. So they have to remove the jump shot. 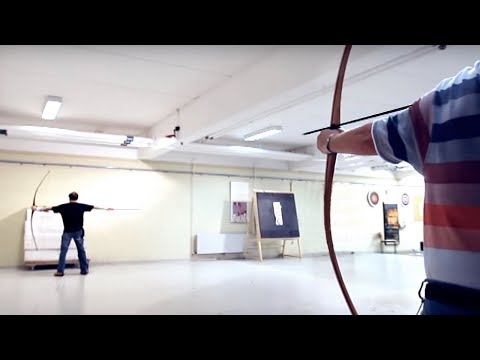 yup except lars is like, the only exception to archers being mobile while shooting, but also looks less goofy somehow XD however, he’s easily able to be caught up to. because he’s slow (movement wise, not shooting wise) can’t have haste AND supreme accuracy and dodge rolls with infinite arrows

This guy is such a beast though.

bump… my internet has been ALL F’ED UP… so I’ve not been on lately.

This is being removed next update. Honestly, I really hated it, but now I dont really think its a huge deal.