Hi all, We are aware of a possible gold duplication exploit that has been circling and we are temporarily disabling all forms of wealth transfer between players (ie. sending currency, guild treasury, trading post, player to player trading). Any player that has engaged in the use of this exploit will be actioned against. Once the gold duplication exploit has been investigated and we are ready to turn on wealth transfer again, we will update this post. Thank you for your understanding.

Luxendra with the quickness on that reply

Any chance we can get an in game message or on the official Twitter page.

I’ve asked but I don’t have control over those domains unfortunately.

I would like to ask if you realise that you simply killed the game at this moment, how is it possible to put a stop to all the economy in a game that 99% of the game is done around his economy. I love the game, you guys made a piece of art, but the amount of bugs and even worst the decisions that are made to mitigate those bugs are atrocious. Are you guys trying to kill the game? I mean don’t get me wrong, I like the game so much I bought it twice!

I know the decision making is not up to the community manager, but surely someone needs to inform the individual/s behind them that this is not the way to manage a online game!

Please do not kill this game.

I appreciate that you cannot give a detailed ETA, but if you could at least give an idea as in today, tomorrow, by weekend etc, a large portion of the game is actually unplayable, who would have realised just how much the game depends on the trading post.

I’d just like to know if I’m wasting my time keeping myself from being AFK kicked while waiting for the ability to buy from trading post again. 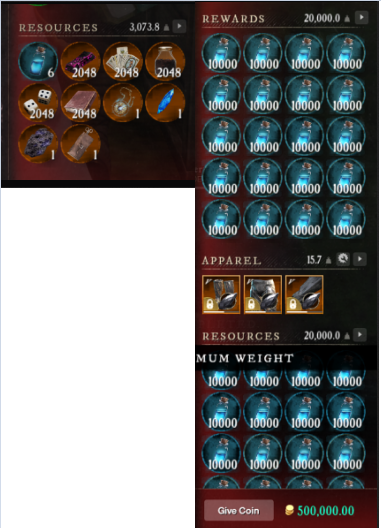 I have seen this photo float around, but…
I have heavy doubts on the validity of this image. It says rewards 20,000 weight and resources 20,000 weight and then on the left it says resources 3073.80 weight. I honestly don’t believe the photo. I wish someone to verify the weight of these items, which could tell you if it was a bullshit photo or just photoshopped.

I do believe there is a duplication bug, but don’t believe the photo what so ever.

Amazon also can easily see how much money players have and would immediately look at players capped in gold or with a crazy amount like that of azoth.

Stop deleting my comment, it wasn’t against any rules or made in bad intent.

[quote="[Notice] Temporarily Disabling All Forms of Wealth Transfers, post:1, topic:485894"]
Hi all, We are aware of a possible gold duplication exploit that has been circling and we are temporarily disabling all forms of wealth transfer between players (ie. sending currency, guild treasury, trading post, player to player trading). Any player that has engaged in the use of this exploit will be actioned against. Once the gold duplication exploit has been investigated and we are ready to turn on wealth transfer again, we will update this post. Thank you for your understanding.
[/quote]

So presumably, you will also be getting rid of repair costs and property taxes while we have fewer means of earning gold???

Does this mean wars and invasions are disabled? I am unable to upgrade my town or fort so what happens if AGS also didn’t pause invasions and we have to deal with this for seemingly days.

This affects wars, as we cannot trade important potions/food to our allies. Essentially, whoever had the most buff food / potions before the market went offline has the upper hand, especially because no one expected things to be shut down today. A notice would’ve been nice.

Do you guys plan on turning Market back on this current day, US time?

How are people supposed to get ready for wars tonight and such? Just take the damn servers down, clear invasions and wars, and do what must be done instead of letting this continue. People love the game, just be pro-active and take necessary action.

Lol. There’re videos of replication. The trades were shut down not on suspicion, it was shut down because people made bug from closed beta, or maybe even from alpha visible…
There’re even old beta posts with same dupe which was never repaired. According to People this bug came from alpha to beta, then from beta to launch, reported multiple times but never repaired until everyone found out how to dupe.
Devs screwed up big time.

WHAT.THE.ACTUAL.FUCK?! If the “action” isn’t a complete ban then this is just a joke.

Yeah, whoever was running the show needs to be the one to speak up on this. There’s absolutely NO WAY that this should have gone un-addressed since it has been PUBLIC INFORMATION for almost a year

Not sure about 3 years, but 3 months ago, there were answers that they’re aware of the issue, it was closed beta. Haven’t seen any about alpha, but people claim it was in alpha already.