I posted this a week ago during PTR feedback: [Focus Feedback] Great Axe Changes - #18 by ohyeahhh

Please consider reducing the ridiculous 7-8 body length Great Axe lunge distance on both light and heavy attacks. Not even abilities on other weapons have this strong lunge, let alone auto attacks. In PVP, I see GA users literally just leaping and teleporting from one person to another. There is little to no counterplay to this, as even light armor rolls are still within distance. 3 medium dodges do not go far away. 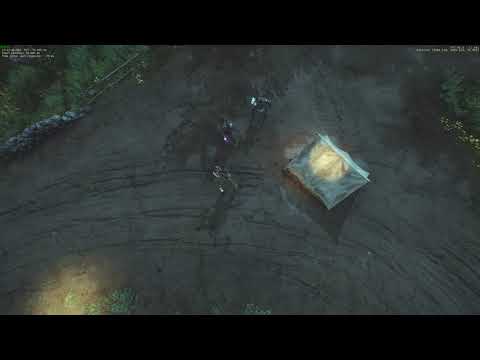 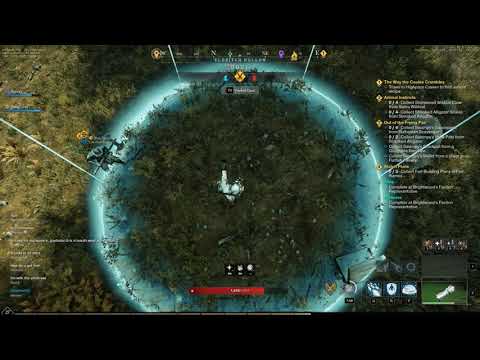 Here it is in distance markers based on the number of body lengths of a New World character: P.S. A community manager (Not a fan of these balance changes - #5 by NW_Mugsy) said that we need to provide detailed feedback, and that they listen to all feedback. I can assure you these are lies considering the number of feedback both in the PTR forum + General Discussion + Gameplay Feedback that was given about the overpowered nature of the Great Axe + Warhammer combination.

Also that chain CC is way too good in Wars / Outpost Rush with no counterplay other than using GA/WH itself.

Agreed, add a 5-10s CD to the lunge (maybe add it as a tree passive) and reduce the distance by half. CCs also NEED a diminishing return!

100% agree. It is absolutely ridiculous how broken the weapon is, it blows my mind that they can’t see that.

The saddest thing about Void Gauntlet is that I use it now… with GA. Because GA is OP AF. Lol.

Imagine a medium or light armor dps using their double roll to try to escape from a great axe and with two light swings hes right back on you with full stamina while you have 0 lol. People say mages need nerf because they do too much damage while great axes have more CC than almost any weapon in the game and can lunge you forward 4-5 feet per light attack spamming left click. Meanwhile all of mages abilities are about timing and skill shots on every aspect, yet its abilities and light/heavy attacks hit for ~40% of what a great axe hits for. Great axe also has stagger which limits the opportunity for a caster to escape while fire staff has 0 CC and ice gauntlet ate a hard nerf, plus ice shower can still be avoided by jumping out of it, but lets increase the cooldown, that will help. I’m sick of this game catering to melee when they’re broken, only melee think they aren’t. Did fire staff do a lot of damage? Yes. Did it deserve to be nearly nerfed into the ground? No. Killing a melee solo is nearly impossible with all the cooldowns they have, CC they have, and potting on CD while it takes two abilites and 2-3 heavy attacks to match an infused healing potion and they’re right back to full after you’ve used everything you have to get away from them. It’s either they stay on you and kill you quickly or you go full sweat and attempt to kite a broken class for 5 minutes to negate their cooldowns and catch them without any up.

At this point really just fire your whole combat dev team because the buffs to hammer and great axe were so unnecessary, you have created quite possibly the most dog shit combat meta we have seen in this game where 25 hammer/great axe and 25 muskets will dominate any war meta.

Really just fire the guys at this point because combat is just straight so bad. At this point just bring stagger back because it is actually funny.

You took stagger out of the game only to NEVER implement diminishing returns on stuns currently, and we are back in a stagger, CC meta, but people with complete lack of skill can just win every fucking melee engagement by spamming left click, and brain dead pressing 3 AoE stun abilities on a hammer.

Congrats on fundamentally never solving the combat issue in the first place, and creating quite possibly the most watered down form of combat in a Souls like or fighting game on the internet.

I know this is a bit flaming, but just need to get off my chest how I feel about painful changes to combat that make the game completely un-fun and make us question if the combat team even plays their own game. I’m sorry to say this in such a harsh way, but by god this combat patch with nerfs to mages, and more buffs to the most META weapon combo in the game show a complete disconnect with the devs and how the game is currently being played.

Healers are useless you are better off running more bruisers to counter stun their healers because the amount of burst that great axe and hammer does makes it so you can’t even heal shit tbh.

Would be surprised if this game lasts by fucking Christmas man. And next weeks patch should really fine tune this combat patch and there should be a combat patch every week.

2 YEARS WE HAVE BEEN SAYING THIS. FIRE THE COMBAT TEAM

You had the most unique combat in any MMORPG and the only fix you needed to do was DIMINISHING RETURNS ON STUNS AND STAGGER, and reducing attack speed on light attacks for certain weapons and actually give a tutorial that teaches people how to play the game.

There should have to be a choice made for CC or damage, Hammer at this point is more of a mage than fire is at this point, it’s literally the mage of melee.

Path of destiny does not need 110% weapon damage.

Great Axe insatiable gravity well does not need to double proc for 99% weapon damage, PLUS healing.

The build as a whole can do everything. CC massive groups, pull anyone and be unable to escape, heal yourself back to full with one path of destiny in wars.

GA/WH is broken AF. Just look at at that lunge and intercept 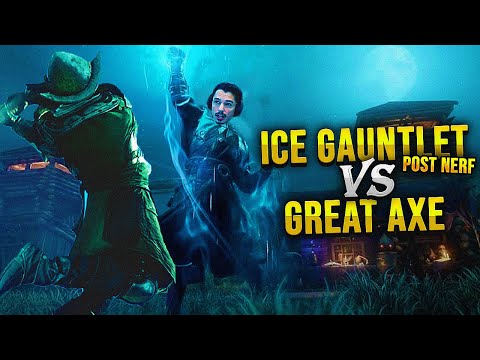 Please consider reducing the ridiculous 7-8 body length Great Axe lunge distance on both light and heavy attacks. Not even abilities on other weapons have this strong lunge, let alone auto attacks.

Melee in general should have a lunge to prevent easy disengage. Especially spear and rapier.

Great axe and Hammer should have a very large auto aim range but a shorter lunge than this. Spear and Rapier should have a lunge that goes this far but the auto aim should require the mouse cursor to be much closer to the enemy you are attacking.

Lunge range should also be this far if your mouse cursor is on their back. If you wanna get away, use dodge rolls and mobility skills. Pressing W by itself shouldn’t be enough and having a massive auto aim with massive lunge on Great Axe and nothing close to it on other weapons is absolutely stupid.

The great axe and hammer are supposed to be weapons about dealing damage and cleaving enemies. The spear and rapier are weapons designed for their reach and lunge.

Jeff uses great axe and has threatened death upon any dev that touches his great axe. Its hopeless boys, pack’er up.

Has to be the case, since well… its obvious.

Healers are useless you are better off running more bruisers to counter stun their healers because the amount of burst that great axe and hammer does makes it so you can’t even heal shit tbh.

Agree entirely, and let me say as a healer (who actually doesn’t play any more), these changes were part of the thing that drove me away. AGS made substantial changes to healing shortly after fixing bugs (resilience, onyx) that fundamentally changed the game, all while buffing melee and failing to address CC. Healers need to be in heavy to survive because there is no play/counterplay to be able to escape from CC abilities and melee. Performance and targeting are still terrible, as well – these things needed to be addressed first, then BREATHE and figure out what the balance is like and what the meta should be.

As Birdperson said, currently, there’s no reason to run healers, just DPS your hearts out.

AGS, you are changing too much at once without addressing underlying performance and mechanics problems, and introducing new (and worse) bugs as you do so. The balance changes from this patch should be reverted; then you should fix bugs and performance, then WAIT and figure out how things are going in terms of balance after those fixes. Then roll out changes to PTR and leave it there for like a month, listening to feedback and changing things accordingly. But give your players a darn working game in the meantime – performance needs to improve and left-click spam needs to go!