lol they just trying to balance the game so you stop killing everyone. (This is Darien Blackwell)

19th March. No updates. No info. No news. We dont even know if they are working on it.

they are working on the blunderbass and the update, yet it was said in the video)

i remember killing you here and saying feelsbadman lol, you were stuck in animation of the fire staff charge but your character never moved from original spot

Yes. I read that too. But… 19th match and no updates. February’patch should has been removed in the first day it was released.
Give the player a stable version, and then they can get all the time they need to fix this. Live is almost 1 month in a broken version, that is not a good idea.

yup ik… but well, thats what it is…

I think we should not except something fixed till end of march/midd of april, imo

Personally i took a break from the game and i dont regret it, no need to generate more frustration into NW 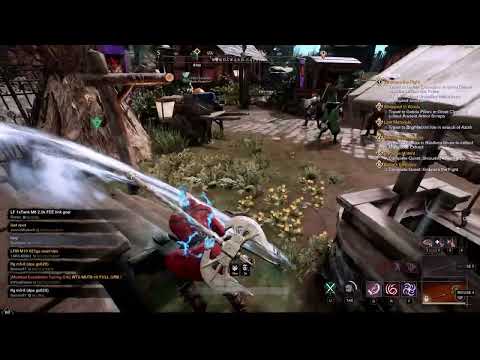 Im not playing since February’s Patch (the game is unplayable).

But i logged today to do my daily Runic Leather CD.
Look what happend when you are ALMOST full:

This is why you get De-SYNC when dodge (in the server you move 3 meters, and in the client u only move 2).
And the same for all problems posted here.

@Luxendra ? AGS still doesn’t realise how bad this problem is.

Did not mean to delete above, rebump I guess

I read posts here and I dont know what are u talking about… for me after these 3 months of break it works much better after stun or cced I know which weapon I will have in my hands … only this desync after walking into ice wall is terrible. Playing with GA is still awful they should revert old lunge or increase it by this 0,5 m but it goes in correct way I hope upcoming patch will fix it.

other weapons like rapier don’t need lunge, only great axe and warhammer

I am one of those people that lurk the forums and don’t post, but this issue is bad enough to make a 1.5k hour player like myself actually login and BUMP, I think if you spend the next 5 months working on the desync/stutter issue it will be worth it. We dont care about the other bugs nearly as much as this… The combat was better in BETA than in your newest action que update. what gives??

What they should do is copy games where such combat works.