please make each hit of Rapier,IG,Musket builds to be 10k and because they are so weak
and then all their classes in the game are deleted
only these 3 builds please

you are making fun of playerss

You may not know how POWERFUL these 3 builds are, but you must have noticed the players leaving the game because of these broken builds because the number is too high to be underestimated. pls understand now we want BALANCE

IG ice shower freezes you forever. (0% chance of surviving in a collective fight)
when you catch, use ENTOMBED %100 SURVIVE (ENTOMBED hp 10-12k :D:D:D:D:D:D:D:D:D:D:DD:hahahahahaahahahahahahahahaha)
Ice Storm 200-300 damage every 0.33s This character is the god in the game
Rapier use 3 skill %100 survive
musket does 4-5k damage

What are you waiting for to nerf these Builds??
all players delete the game?

People below 0.9iq who will defend these stupid builds please don’t write because I don’t want to see your selfish thoughts under this RIGHT thread

Wait. i have just realised that it is you again…
You only spam the same thread in the forums, i was thinking you were another person, but no. You are the same person who is creating threads and threads asking for the same.

he is obviously being sarcastic ahahaha
nice one!

Pls nerf this damn class now we are chasing 5 people to kill 1 healer but he still escapes impossible to catch 360 stun, Evade,Fleche only if you use these 3 abilities blindfolded you will still survive

Asking for nerf rapier and musket:

I don’t know how much longer we’re going to complain but we’re really tired of this I’m calling out to the DEVs from here, please go to any server and play the OPR mode, because you don’t understand, with Deullo, the players are looking at the statistics of which character is played the most, You are nerfing or buffing characters, which is not a healthy outcome. You will enter the game and you will play the game. it’s not very difficult, just spend 5 hours in opr mode and you will understand R…

Void Gauntlet is overpowered Even a blind person can play this character very easily. all it does is use Petrifying Scream ability, use Oblivion, use Void blade LMB+LMB… and destroy And if wearing a Heavy set, it’s impossible to kill and he can fight 4 vs 1 blindfolded. Petrifying Scream definitely needs to be nerfed Damage required to be reduced by 20% I made a build today Void+fire Medium armor I only hit someone wearing Light Armor 3 times in OPR All I did was Petrifying Scream(succe…

Asking for nerf all ranged:

OPR only plays BOW, MUSKET, FIRE,ICE,VOID, really thanks amazon for that. Please don’t rebalance again, every time you balance you’re screwing into the game. You are considering buffing the FIRE staff on top of everything else. XDXDXD fire staff deals 3.5-4k damage and you think fire weak ahahah.

You threw GA in the trash. It’s not playable because of the bug, it’s impossible to catch ranges with War hammer, there’s only one hatchet left, you’ll nerf it soon. I’m deleting the game until…

Asking for nerf all ranged again:

AMAZON pls dont do character balancing again, turn a person from the street, have do it, you will get better results my defense 1.163 phys 1464 elem Medium Armor musket gives me 4k damage

(it hits light armor 2 times XD ) Bow gives me 6k damage xD Buildi of the enemy I just came across in OPR= Full heavy 200 cons 250++ int, Void gauntlets, Fire staff With the void blade it does me 1.2k damage, with the fire staff it does me 2k damage XDXDXDXDXDXDXDXDXD It’s not a joke it’s real an…

GJJJJJJJJJJJJJJJJJJJJJJJJJJJJJJJJJJJJJJ U KNOW WHY??? because no other character other than range character is played in the game at the moment I said that if you destroy GA, the only counter of range characters, this result will be inevitable. But you chose to listen to some players who don’t have brain cells I repeat, this feature should be reinstated. : Light attacks and non fully charged heavy attack: Reduced homing range detection from 4.5 meters to 3.5 meters. as other nerfs should be…

Confirmed.He is a GA user that only want to kill verybody with left click, and only spam and insult to everybody in forums to nerf all other weapons. Better to ignore this

People below 0.9iq who will defend these stupid builds please don’t write because I don’t want to see your selfish thoughts under this RIGHT thread

insulting people will get you nowhere, nor will help you build a real conversation

here you go, someone else with MAX0.9 iq

what he actually means is, “I have mental retardation, and one arm is injured, so I will always write contradictory articles under such topics so that the build I play does not get Nerfed.” xD xD
All I want here is balance, but you’re too stupid to understand that. what a shame

This is vile and inappropriate, and only goes to demonstrate that people like @Carlanga92 have astutely observed what a troll you are and that you continually demand developers to make everything easy so you don’t have to use skill (which I’m somehow sure is in short supply with you) to win PvP encounters.

I wish you had written your dates. but you didn’t write it on purpose

because VG is now balanced. GA is balanced (only problem is desync). Bow’s bugs fixed. FS Balanced. I don’t have a complaint about them as long as they don’t lose their balance again

Because I’m so tired of selfish people. They know the truth, but they deliberately oppose it because they can’t play any other classes other than those classes. they are incapable

Im pretty sure we are playing two different game. Dex players are nonexistent, rapier isnt immortal, healers are who use it. musket never does 5k, maybe a 4k headshot on a low gs full pve light player but even on those its rare.
I guess you are another GA player who got kited once and now came here crying about builds thats the least played and least op.

Who u can even compare melee gameplay to musket, bow left click spam from the highest point at map, where nobody can touch u and u just braindead do lbm spam to coming enemies hits them fully armored for 1,8~3k

A lot of cheesy builds with these 3 weapons 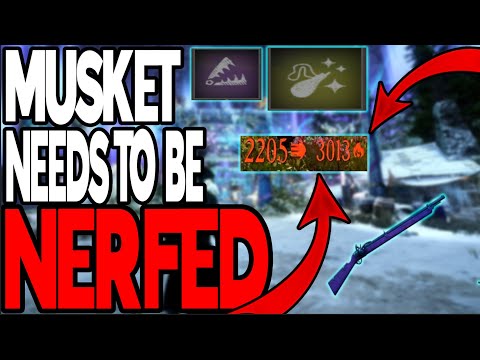 I wish AGS would publicly release some in-game statistics:

I think the results would be interesting.
Or at least would lead to some people stopping whining for a while.

DEVs, if you see this, please do not alter your game based on one prick who is butthurt that he gets destroyed in-game. Fixing the stuttering and lag issues in PvP is the biggest obstacle we melee players face right now.

With the current desync and how strong walking away from melee is this game needs hard cc for it to be playable. Fix those things first then grav and shower can be deleted from the game for all I care.