Proof of them admitting to using the bugg - Twitch

On launch day we as a company took Everfall on launch day for Syndicate. We relized quickly there were more Marauders on the server and some Covenant. Covenant beat us to taking Windsword by about 60 seconds. We took Everfall instead. Green took Monarchs Bluff. After a struggle of getting the town and taking off offenders we kept the town square till Friday or Saturday Evening. We were being attacked by 3 people able to turn the territory by 15% per turn in. We basically did not sleep over the weekend and fended it off till last monday.

Today on the other-hand we kept it for another week. We lost a another companies territory in bright-wood Sunday night, was flipped instantly from influence % increase by the so called dev decision we found out wasn’t an exploit. The video Twitch shows how the lag turned the War. Today we lost Everfall to Desync as well with a fully upgraded fort and almost upgraded town Twitch We wanted a fair fight but we got Deysync and lost 100s of hours of work by our company members due to them desyncing servers and the servers them selves.

We are out numbered as syndicate on the server and the devs decision on influence basically made this game into a game of Rust and Ark. Where we barely slept, upgraded the hell out of our territory and turned it into the trade hub with good decisions on crafting areas. Now its in the hands of another faction due to desync and not able to observe everything happening in war.

This should have been patched immediately when found out last week now companies are losing their territory. Currently the server is losing it. Syndicate just lost their stronghold and we don’t see a way to take it back with a handful of 60s. We pushed them back with tactics and strategy. Green and Yellow exploited exp to 60 within the first 5 days. We didnt get ours till 7 days later. This game is not fun for many of our company members.

Edit: After a few wars and much thought. I still believe the lag was a leading factor to losing our town. It provided cover and crowd control to allow siege and points to be taken. After reviewing the videos a few more times Yellow did have a strategy to take out our back-line and another point at the same time. The desync did hide this from the majority of our players creating and opening.

Looking at our server now. 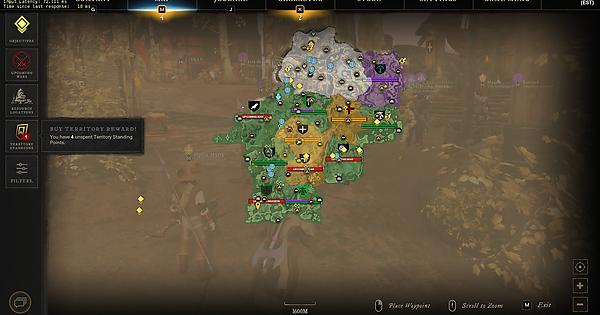 The Desync exploit has been known since beta. Why Amazon did not disable wars until it was fixed is beyond me. The constant videos, posts, reddit threads and in game chats should of been enough that any one of these days now like today… wars are disabled until they can fix this.

Unless i have missed it, i have yet to see them say anything regarding it even support is useless. Just report it to the forums ladalada yep unreal. Mini rant regarding how great the support has been…

During alpha, when you changed the setting to only render attacks around a player with x Meters, it gave us more FPS but server-side performance took a nose dive