Do you agree with the new stamina changes? 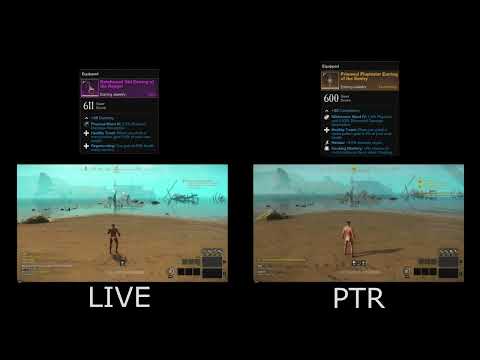 In my opinion this feels very slow and unreasonable for how the pvp side of things is played out, However I would love to hear the reasoning behind this @Centeotl and in the discussion is there anyone who is enjoying the changes to stamina if its a majority no will the changes still be pushed?

like me as a most of the time light armor player. I can see the intent behind it but I feel like this and combined with the dodge distance reduction when slowed is too much.
To be fair only one of those things should be pushed out to live and not both at once.
If this one comes out they should reduce it to 0.5 at least.
The only wep that probably wont mind this is spear as spears passive regeneration from critical strikes is nuts

I think it makes the game feel worse, but if they decide it’s necessary that’s fine. With the other changes it makes sense, but it does make the game feel less fun IMO. I have tested it quite a bit and I don’t die anymore than before, but I just have less control.

I can guarantee the majority of those celebrating the change will end up hating it more. This effects melee players regardless of armor weight way more than ranged and yet… It is celebrated because they think they are losing because of dodging. Dodging isn’t the problem IMO, those complaining about light dodges will still lose and complain next patch. Those who beat them will adapt.

It will be just as bad for medium/heavy. How do you move into and out of a point? How do you engage/disengage a ranged player. This has now got a lot harder for you.

Yes and it is important. The point would be that the light armor is finally used by the ranged dd and not the dolphin jumping melee.

I think the direction is great. I love it. But I think the timing is a little off.

That stamina Regen delay is more like 2 seconds rather than 1.

So yes, I agree with it, just fix the delay. It’s obviously bugged to be longer than intended.

no don’t like it at all
the reduced distance on slow, nerfed dodge distance, increased homing + the new perks are enough of a nerf

the delay needs to be removed imo

I don’t like it but considering that not a single patch goes by when ranged are not gimped to cater to the favoured GA users, I guess we got off relatively lightly this time.

no i dont agrer. This is a very big nerf to light armors. Slows reducing dodge distanct seems resonable, but this seems like they just wanna kill off light armor players lmao.

U get 2/3 dodge as light armor and u constantly have to dodge because of how squishy u are, and they’re doubling the speed of stamina recovery… maybe even tripple idk the exact numbers, somewhere between that range.

I think it is a good change; it stops the dodges abuses for any type of armours, yet:

I disagree simply because if they nerf stam regen they should also nerf melee homing, instead they are even buffing it, which is absurd.
This change will simply make melee bruisers stronger, while weakening all the others setup.
Not to mention that they also nerfed the dodge distance AND it’ll be even shorter while slowed. Nerf upon nerf basically.

I’d like to point out though that the regen starts sooner if you keep moving after the dodge, for some reasons I don’t know…

It will be just as bad for medium/heavy

I don’t think it will be “as bad as” for medium and heavy, because those setups are usually melee, hence they will use mostly the homing to catch you. Take the spear, its homing is really good, and you don’t need to constanly dodge to get someone, you just need to hit them once (they get the hit-slow) and then let the homing works, while if you have to run away from a spear you HAVE to costantly dodge. I hope I explained the concept well.

EDIT: remember whey the axe had an insane homing distance? How it was almost impossible to roll away, that’s what I fear it will happens.

I’m not talking about catching player, I’m talking about their ability to survive. They can’t even approach a ranged player without dodges, not without taking a significant amount of damage. In large scale they can’t get onto or off of a point without dodges. It will at the very least be equal detriment IMO. I have experienced this on the PTR too.

I agree that within melee range a ranged player will now struggle more, but melee will be punished a lot more at range with this change. This is often the case in opr or wars. I think they will hate this change more ultimately.

I understand your point. I guess time will tell.

stamina changes feel very bad on the ptr and i for see myself quitting the game sadly if they make it to live, running away is a completely viable option in combat why remove it?
They need to stop trying to balance a 50v50 game for 1v1 combat(or 3v3).

I am not a fan of this change purely on the fact that it just makes the game feel worse to play.

If they implement it I’ll be fine with it, but I don’t think it’s a good way to go IMO.

It’s not the worst change but the timing seems longer then 1 second.

The reduce distance on dodges is a weird change. The medium dodge not travelling more distance then a heavy dodge is not too nice.

It does make items like these with stamina perks more valuable which is good.

When you are hit while below 50% gain 50 stamina (30s cooldown.) Does not trigger off persistent damage or DoT effects. New World Database contains all the information about items, quests, crafting recipes, perks, abilities and much more

(Probably want to make this available for all armor types)

If a hit is avoided by dodging while in a light equip load, gain 10 stamina (6s cooldown) New World Database contains all the information about items, quests, crafting recipes, perks, abilities and much more

USE: Increases Stamina Regeneration Rate by an exceptional amount for a short time. New World Database contains all the information about items, quests, crafting recipes, perks, abilities and much more