Quit crying. This is end game progression. Name any other mmorpg that doesn’t have something like this.

Oh no, my GS is getting nerfed to give me more reasons to PvE and spend time enjoying the scenery and socialising!

I welcome the changes happily. I’d like to feel like I’ve actually worked to hit 580+ rather than buying my GS from TP.

Thanks AGS! (IN B4 Whiteknight bs)

The watermark grind has been increased 10 fold.

Did anyone apart from the 1-2% really care about WM? Hasn’t affected my progression in anyway… boom level 60 boom 580+

Yeap. Tell that to a new player after they reduced the rates at which you attain WM by 90%

I am being very bold in assuming there will be any new players, of course.

I am fine with the grind going forward, what is complete BS is retroactively making players “temporarily” less effective because they spent hundreds of hours grinding other things in game instead of HWM.

No player should go backwards in effectiveness. Change what you want going forward, but this system should not cause anyone to go backwards. Unacceptable.

Same I think it’s a good Idea. Most people do, the only people concerned, are the ones that do zero endgame content and tried to shortcut the system buying and crafting gear.

Essentially, WoW does that every expansion… grind 10 more levels grind all your gear again… People love that crap and their sub figures don’t lie. (Although hidden xD)

Lol if crafting gear is short cutting the system I don’t want to be part of the system. You know how long it takes to grind crafting and get gear with the right stats right?

People like you are the problem, making crap up and passing it off as some sort of truth.
Where is your solid proof? 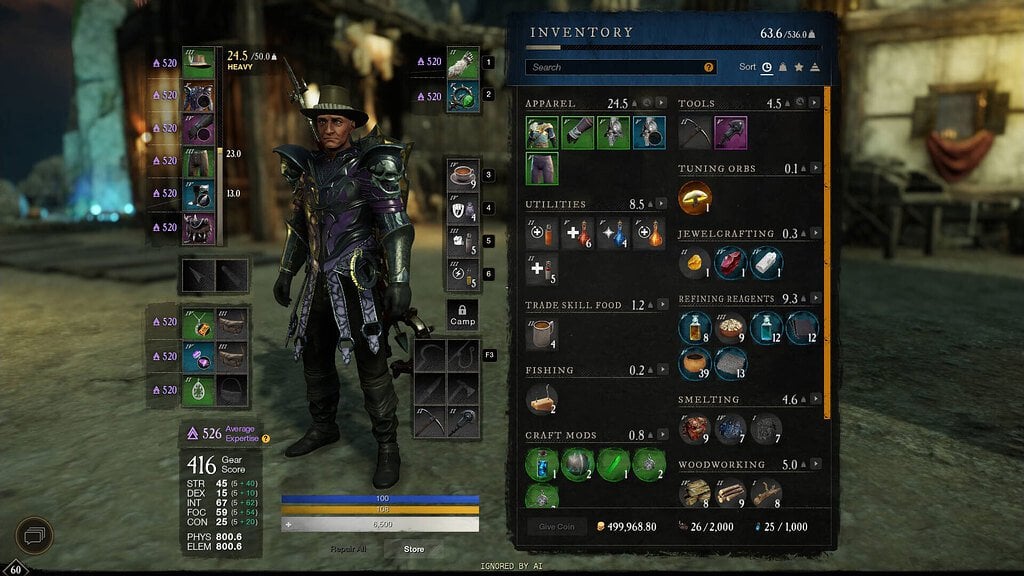 data mine lol, those are never 100% correct, its all about interpretation.

Yes yes, and if you keep plugging your ears and bury your head deep enough in the sand, amazon will turn this game into a wonder of player enjoyment.

Again a lot of MMORPGs add new recipes as GS/ilvl cap goes up. Essentially the same thing is happening

The problem is the game advertised crafting would have end game gear. It’s better to have options then one source for high end gear. Especially when there is no real raid/ end game play. So no reason that all forms of play can get high end gear, crafting, PvP and of course PvE.

No one is crying, it’s more like what the fuck?

They are adding new ways to get gear…

It’s not that they are making crafting worse cause they aren’t. But those who focused crafting and not WM are now severely behind cause they didn’t pick the “right” endgame activity.

Again a lot of MMORPGs add new recipes as GS/ilvl cap goes up. Essentially the same thing is happening

…except that those are additions, and not a retroactive nerf to people that didn’t play the game the “right” way, and instead purchased the gear with gold they earned through other means.

Crafting is easy. 150-200 is the only “hard part”, if you can even call it that.
You can tell by the fact that soo many people have multiple crafts at level 200, 2 months into a new game it must be super hard… lol

Isn’t that what the new currency is for? Upgrading crafting GS from all PvE activities?

Exactly, I tried to do both and it wasn’t feasible. Got a mate to craft me high end gear because I’ve been focusing on furnishings.

So, this higher level gear that will help with my crafting is now getting nerfed. It almost seems like I’m being punished because I chose to level (arguably) the hardest trading skill in the game.

I did’t expect this gear to last forever, but I certainly need it to be effective till I hit the magic 200.