My question is what are consequences… Are they going to get banned ? As i understand in ANY other game people not following rules are punished. In my understanding if i break they law i must consequences of my actions. So my question is… are we going to lose Windsward ? Should we start to exploit ? WHAT SHOULD WE DO ?! Other companies are going to face those players aswell…
If support is not going to do anything with that issue i would like to have a refund…

We played our war. I wrote to support which recommended me to make a forum post. Tomorrow we have war at Windsward and how can we defend it while tanks are dying faster than turkeys around cities… Should our company start to exploit to play on even ground ? I do not understand why players are being punished because game was released waaay to early since i feel like im playing alpa or at least early beta. I am not here to ram on game desing, it’s just so frustrating to spend over 300 hours to put team together make connections on server build a community, farm gold which is dissapearing from market but what do i know. We as company are trying to play fair and get better without any cheats, exploits or anything alike since this game is designed to be a pvp based game. Competition is main content but it feels like it dies since lately you just dont want to play it…

Its funny u are crying about “hatchet exploit”, when they played with full squad no one could take down their territory(even they had 2 wars in this same time), u got their towns because no one of their was in war. Some of u too was using that exploits, “since our company is refusing to use exploits or rather cheat.” what is that? U wanna tell me u not was abusing crouch&heal bug while u fight with Oddychalnia at Brightwood? Lool really man? Every guy of u have gear fraction - bcs this reduce damage so why u using that mistakes to get for example Windsward? - Stop be hypocrite because u too are not playing fairplay : )

Mersi here, representing whole Oddychalnia and its Academy.
All the actions regarding covski and Yoshimori were taken. I hope you guys will do the same to your people as - not gonna lie - your companies started the trend of the exploiting.

Stream from Polska Husaria on Karkar (28.10.2021): [Twitch](https://Twitch video)
At the minute of 9:30 (until somewhere ~11:00), there is a discussion about exploits. Your friend on voice chat literally said that he abuses current bug and did abuse lifestaff prior to the patch… and he basically brags about it. There is nothing mentioned on the stream regarding consequences about this guy.

As you guys are in coalition - there is a risk that you might be sharing the information and details about each bug and exploit you find.

The next time you are going to deliver threads like this - please come prepared. I don’t have that much time to manage conflicts with minor guilds like yours.
Moreover, instead of arguing on who will exploit more, we should encourage ourselves to bring those topics to help/ticket section and assist the Amazon Team resolving them as soon as possible.

@Suslog I would like to apologize for all the problems we have created on your end. Although, you have to understand that this does not (an never will) work in the one direction. We are good friends in the game and externally there was an occasion to reach out to me and clarify on any case - you didn’t do that. In case you would like to facilitate your complaints, please add me on discord: Merci21#8733. Just don’t force one-sided arguments and stay out of toxicity your guild is spreading. Seems like you guys have personal issues with Oddychalnia and it doesn’t seem right to expose our units to exploits, while you are using them on public repositories.

PS. In case the owner deleted the archival video, I have cut the moment mentioned above: Streamable Polska Husaria

In your defence against accusation of organised exploiting in the war against a company “Konfederacja Gamma”, you pointed twitch clip of completely different company, talking about exploits, calling some random guy OP’s friend. Then you asked for punishment for 5 nicknames, no single one is part of the company you respond. Create different topic for Polska Husaria in that case. If you can write so much without giving a single proper argument, then the intentions are clear and there is no scope for discussion with you.

Oddychalnia is known for their failures in conquering best economic cities, they lost 2 wars in Everfall and were unable to get influence in Brigthwood, losing in open PVP for over a week, day by day. Everything changed after latest patches, when game-breaking bugs were added to the game. It’s not problem of single people rarely using exploit, Oddychalnia is just known for doing it organised.

This topic contains also lie, accusation against “Konfederacja Gamma” of buying Windsward for gold, without giving any proof. This is video of the mentioned war, which was played seriously: 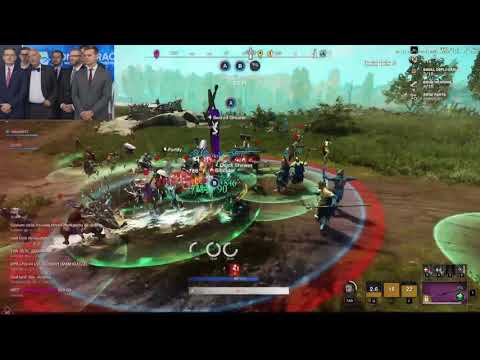 We also would love to see Amazon Games Support interfere into this case - organised exploit abuse used by minor company to cheatly take over territories should not be tolerated.

Me don’t abuse, me play fair

What is wrong with people using hatchet in casual PvE content? You exploited them in war. Funny thing is that the guy recording it was asking them for party, having hatchet in the hand, but he changed weapon to life staff for video purpose. We came back to cave to see if he is still there and what weapon is he using, hypocrites

The hypocrisy of exploiters

This topic contains also lie, accusation against “Konfederacja Gamma” of buying Windsward for gold, without giving any proof. This is video of the mentioned war, which was played seriously:

“which was played seriously” Why don’t you keep your guildmates and people from your academy in check at first who abuse hatchet[ie. MagdaWresler] on a daily basis in the outpost rush instead of nitpicking few people who barely used hatchet to make up a lie that we cannot do anything without it.

You guys said that we cannot withstand a defense or get enough influence without ‘bug/exploit’ abuse while us and Warownia are considered the best guilds on the server since day 1.
(we probably overtaken the most cities on this server)

Even with merging two of your guilds into one you cannot get even close to our level.
Please do better, train a bit and maybe some day u’ll be able to fight us on the equal ground.

@EDIT:
No one ever could win the war at first two weeks since turrets were too strong compared to a gear people had at that time, simple as that.

The rest is just a lie - we couldn’t win a single attack and yet somehow we had 4-5 terrorities, you are not too bright, are you?

Lastly we took Brightwood in less than 15 minutes, the 2(?) mentioned ‘exploiters’ could’ve been AFK and we still would’ve won that fight - you are jus THAT bad.

My question is what are consequences… Are they going to get banned ?

NOTHING will happen to them.
AGS did not ban a single account of any exploiter, they simply don’t care.
If you don’t exploit, you are punishing yourself.
Sad, but true.

I know for a fact that botting only warrants a 2-day ban so by order of magnitude to the offence, exploiters wouldn’t get banned for more than a day anyways

I don’t think they even have a way to see logs of these type of exploits. Like the rapid fire staffs the hatchet etc…

Outpost is now rampant with exploiters I mean BAD.
Hatchet 300% stacking
Speed Boost on GA
Rambo speed weapon attacking from staves.
People escaping the start field to cap a fort before the other group could even exit.
Exploiting multi spawns from the portals

I would love to see where the regulations are broken in the clip, or a bug was used. I only hear words unconfirmed with clips. If any of the players from my recording broke the regulations and you have proof of it - let them be banned.