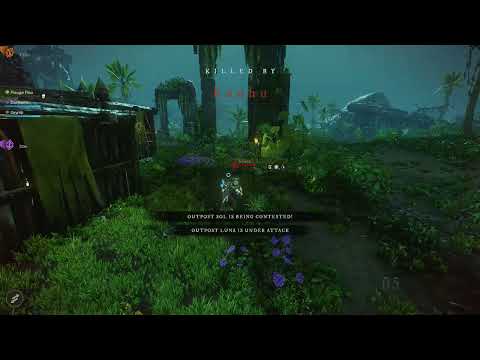 wearing 5 onyxs and 5 pieces of resil

Rant: why is this low skill 1 stun cheese combo shit in the game that can kill almost all light and some medium almost effortlessly my grandmother could perform this combo and she’s never played a pc game in her life then it takes a powder burn followed by 5 headshots for me to kill a healer or anything else in this game with 50 con as a musket player along with the lag of this game the skimpy hit boxes and everyone iframing 80% of the time

Hi there plauge, I can see why this would be frustrating to deal with, I will make sure this feedback is recorded and sent up the chain for you. Take care!

That looked fine to me. You would have killed him in 3 or 4 hits total. But, yeah, getting stunlocked and getting 100% to 0% sucks. To me it’s much worse when it’s a guy in heavy armor that does a 100% health stunlock combo because it would take like 15 musket shots to kill him.

How is it fine to not be able to do absolutely anything but run? the smart ones use there shield to close the gap

If you dodged his bash/leap, and hit your next shot he would have been dead. Also, you missed one shot that would have killed him.

I play musket too. We cannot just dominate everyone. It wouldn’t be fun for anyone, but us. I think that build he is using is annoying (getting stunlocked is lame), but his health is so low that it is fair in my opinion. It is NOT fair when someone in medium or heavy can do the same thing, but takes +10 bullets to kill.

If you dodged his bash/leap

Already went over this before. Leaping Strike is problematic with the lack sound cues and/or wind up frames. Leaping strike is not a ‘reaction’ test since it offers nothing for players to react to.

Riposte, despite being an instant cast like leaping strike has a distinct, audible sound cue. It also has wind up frames and a trigger audio for the stun. As to allow opponents to dodge out of the way if someone else triggers it.

Leaping Strike has some of the poorest visual and audio clarity for a mobility spell.

Compared to other dashes like Burn Out from Fire Staff, which has the opponent’s character scream “WEED SMELLAH.”

You hear a distinct WHOOOSH from Great Axe beginning charge. Well before the channel completes.

You can choose to roll into the Great Axe user using charge cut their distance short, if they are trying to escape.

I agree with all of this.

I would also add that it allows you to transverse far too much ground. A heavy S&S plus GA can keep up with a light bow/rapier once they get in range.

Your positioning was bad here your walking towards them when you should be moving away while shooting to have the advantage, leap strike might be abit fast to react on but your musket shots are faster and spamable. Your like 50con and expect to live with all that resilience. It doesnt work like that yet you hit harder and kill quicker. All i see is bad positioning

@Zelme please please please, convey to the devs that 3v3 arenas and OPR must be scaled/gear-equalized. This is an
Absolute must. We already have enough “unfairness” issues due to differences in builds and weapons as it is.

You’re so wrong. The way you say this is like “just don’t die!” These skitzos can line of sight me block my shots defy death have zero issues closing the gap between me and them can hit me One time and I’m dead with zero effort and not just me it’s across the board nobody should be this easy to own the effort it takes for me to get a kill vs this cheesy ridiculous combo is night and day

Is absolute BS that it’s a thing. Best you can do is to try to predict when it is about to happen. The only stun that has zero animation warning.

I can predict sometimes…but most of the time, it doesn’t happen. Especially against players that know what they’re doing.

PvP MMOS in the age of safe spaces . You stand there , not using range , playing like you should just win because you are you , and you get faceraped …“I died in a PvP zone” …shocking how you just expect to win , when you play with no thought . You have a rapier , shoulda kited when you saw him face you. One dickrider spec fighting another , you just suck more at it …L2P

block w rapier next time you have 3s to react

Sadly its both in the absuletes, you are playing musket which is probably the least effective weapon, and hes playing cheese SnS build which is the strongest 1v1 combo.
If anything this video shows how utterly unbalanced the game is. Some weapons can kill anyone without any effort, while other have to sweat to even get close to kill someone.

lmao glad to see the CM still useless at ags.

yall need to stop playing this trash and remember how bad this was when AGS drops a new title.