8.5k hp so you are a glass cannon what do you expect ? XD

It’s kinda obvious to see what he was going for, you could have kept your distance to utilise muskets greatest strength or switched to a weapon that can block
or you can run that perk that purges debuffs while below a health threshold I guess

You need to run at least 300 dex/150 intel with the musket to do any damage, and it’s not great damage either.

The S&S guy’s combo probably does +10k damage to light armor, so it wouldn’t really matter if the OP had a little more con.

Even if he is playing glass cannon build, it cannot be that he is dying by 1 combo. This is not right.

His opponnent stun takes too long or dmg is too high. Maybe stun shouldn’t do any dmg. Something needs to be corrected here

Playing as a range player, you cannot any more play short - medium distance with your opponents because gonna die fast. So after the patch, the only good idea is to stay at distance - booring

Arenas have really brought these 100-0 SNS combos out of the woodwork. Sadly despite the nerfs, it’s still also still possible with BB.

I’ve seen this hatchet variant and sns/hammer variant too. Nerf one and I’m sure someone will come up with something else.

Sadly, I dumped the last of my gold into a full set of freedom for zero return (perk doesn’t even work). So I don’t see this game offering any kind of counterplay. I was spamming dodge for the entire combo to no avail, you can see my character glitches the start of a dodge so perhaps if freedom was working I would have been iframing the knockdown. What’s even more hilarious is there’s someone trying to peel with Reap mid-combo yet he get’s it off uninterrupted.

Take a look at this: 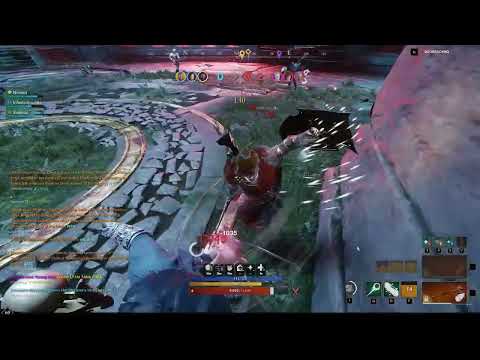 You did not die becuz you were stunlock, you died cuz u choose to have 5 CON.

The guy is literally standing there typing “hey” because he knows if he lands a stun there’s no counterplay and the musket guy is dead.

I wouldn’t say that is any sign of the sns feeling threatened or dominated by musket. If there’s no counterplay then that’s not balanced. I’ve seen this combo work on many weapon combos, not just musket. As for “balance”, on one hand you have an SNS player with a combo that can 100-0 his opponent and be initiated into any form of animation lock from the musket performing any action (aside from block or dodge). And on the other hand, the musket has attacks than can be avoided at will by iframing/running/breaking LoS. This means the Musket is forced to play 100% defensively until the sns has used his leaping strike so he’s not locked, and any form of aggression is going to be punished (animation locks). Hence why he can stand there and type “hey” before murdering his opponent.

I’m not going to run from him Every single time I knew what he was going for I pressed shift and It wasn’t fast enough clearly, obviously he wasn’t threatened whatsoever I thought I could punish him for just standing there and typing “hey” I guess you’re right I should learn to play better or use my abilities during the combo!

Me not being able to avoid this 1 tap combo is definitely a skill issue ! You got me bud! (Sarcasm)

If there is no counter play it’s not balanced

Light armor shield isnt going to save you and slows you down too much. And rolling away constantly or using the overpowered Riposte ability negates all melee encounters.

The one shot prevents that which is why it is being used. If you dodge bait out his leaping strike you would win and be able to shoot him in the face to death.

then just die every time and make a forum Post about. Yes the combo is kinda OP but you can, even if its hard, counter it and yet you choose not to. Instead you taking the clip and putting it here well knowingly you will get “called out”. Cmon the clip lacked quality- you can do better

What is the counter play for melee’s being shot from 100m out to death by bow and musket users in opr and having to hide behind rocks?

The counter play are these light rolling one shot builds or hope your team has bows and muskets that offer some covering fire. But melee itself waddling towards sun take a beating atm from all of the ranged, mage, healer attacks from 20m-200m out.

If a healer doesn’t babysit the melee’s its a bad experience which is why everyone quit playing tank or bruiser in OPR outside of pre-made groups.

Ok do you wanna see a clip of me fighting the cheese builds?

The clip is fair indeed. You play with 5 CON, so 5 Onyx and 5x Resilient wont safe your poor glasscannon ass XD

Ehhhh, why would you send this feedback to the team? The guy is full glasscannon and annoys light and medium users hard with his musket dmg.
There has to be some repercussions if he plays a glass cannon build with 5 CON and light gear - or not?!

Edit: Every build has to have some sort of a counter

I don’t see anything wrong with the balance on the video, all good even you are kinda too strong. 2 shots from range which almost 2 shoted the guy and you complain that he killed you fast? Crazy ^^

@Zelme Don’t send any report to team, all is good with it.