Dungeon is easy, you can do it without a tank, just have rends and the proper type of damage. Caretaker is a joke if you know what to do. Dont cry on the forum if you dont know how to play the game.
My guild is competing on speedruns for this dungeon ~20 min per run.
L2P then make topics on the forum about how hard the game is.
Edit: we all run with full luck items.

Most of my company is on break so I’ve been pugging around a bit.

I’ve noticed huge differences between different pug groups ability to dish out and take damage. Damage and skill rotations in this game to maximize damage are not easy. Certain trees / skill also AMP damage for everyone else.

As for this specific boss I can talk from a recent healer perspective. When I do Genesis I run

In that fight specifically I keep void debuffs up including disintegrate and shift almost full void w/ blade during the arena phase. Even in my healer setup I’m still able to hit for 1300 w/ 2100 crits with my void blade to multiple enemies.

Having your healer contribute to damage may help get through the fights burn phases. As others have said a tank with an off weapon like hammer can also be very helpful.

One note is that as this type of healer I expect DPS especially to be using infused health potions to stay alive. I shouldn’t have to top off every DPS getting hit by an errant ability unless you’re really getting hammered by something.

From a DPS perspective I’ve noticed that different builds have HUGE differences in damage output and ability to survive.

Void Gauntlet as an example. If I don’t build right I do maybe 1k damage a slow hit, and 1.5k on a crit. Using a better build I can crank out consistent crits doing 2.1-2.3k damage a crit. If I have a good team putting up debuffs I can reach 2.8-3k hits faster than the bad builds auto attacks.

So with the right team I can basically triple the damage my peer is doing. Even more putting up the right void debuffs can also vastly increase their damage.

My most important advice is that gear score isn’t everything. I don’t care if someone is full 600 gear score if the gear is missing essential perks and stat break points. My DPS build for example can only hit 197 INT, 150 FOC, 100 CON because one of my best perk items is cursed with 9 str. So I have food to get over 200 int and the dodge mana makes all the difference in the world to my damage rotation. I basically don’t have to dark harvest at all. From a healing perspective I can’t imagine any healer without Blessed and Sacred and Fortifying Sacred Ground. Silver Leaf as a 500 GS item is better than most 600 GS rando rings. I even use these in my DPS/off healing version of my Void/Life Staff build.

But I don’t disagree that the fight in particular is less fun than the final boss fight. Getting the rotation down should feel smooth, but bad AI and clunky fight mechanics can make any part a wipe/feel really bad unless your group is brutalizing the encounter. Especially given key and repair cost I’m not sure expeditions need to be over tuned. This might be fixed when they bring mutations, but who knows with what they’ve been doing lately.

I think first above all else going into a dungeon with the changes that are in place is going to be the need to absorb the dmg. There is the potions that do this but its not enough based on how long they last.

By getting the armor with the perks is the best way to go. There is many different armor out there that you can attempt to craft or find on the trading post that will give you the Luck perk. But at the end of the day its about getting into the dungeon and doing what you can to make things go as smooth as anyone can make it. sooo… that means the Wards on the gear.

I did have some luck with finding gear with 24 Con, Angry Earth Ward and Luck. But i also want perks that assist like Refreshing as well as Shockwave and Armor breaker… Cause these abilities dont just assist me. But they give the rest of the group more dps to get the boss / adds down faster.

I think / feel there intent for the change to make it so this content needs / requires the Wards for armor and Banes for weapons is a great change. Plus when the mutations and the tiers of difficulty come with up coming patch… All of the stuff will be needed…

Now dont get me wrong. There is going to be some people that can dodge better then others that might not need to have the Ward so those people will be able to get away with not having the wards. But for us average folk it sure does assist.

No system is ever going to be perfect. But im also glad its no walk in the park. Cause for End Game content… this is always we have for right now and im glad its not easy.

I get that Genesis got harder and all, but cmon these dungeons are braindead easy.

You should either have a tank soloing inside the arena or if the tank somehow isn’t capable of that with the boss attacking ones every 10 seconds then just keep the healer in there with them, if your DPS aren’t capable of killing 3 mobs without dieing before moving to the next 3 that spawn shit I don’t know what else to say…

I’m sorry, but even after the patch Genesis is braindead easy… You don’t NEED trophies, coating etc; though it does make it easier. Our 5-man with just powerful honing stones can clear it in around 20-25mins. If you’re dying to the wave, stay near melee range and dodge appropiately.

I did my first clear on Genesis yesterday and we died around 10 times mostly due to the ads spawned afted the barrier and the caretaker instantly pulling the barrier again trapping us with a lot of ads.

They key was in fact have the tank break the 0hko attack and just evade him inside that arena while dps worked on the groups of spawning ads (Healer kept also tank up).

We did have some issues seeing the poison fields on the last boss, though

Alright so me and my group has been consistently running this dungeon. We ran it like 7 times in the last few days. Just get some weapons that deal good damage against Angry earth (Fire, Slash) and when he goes in the cage only send the tank in. The rest of the team clears the ads and then in the next phase u dmg him again, go into his cage with the full team and slay him. Done.

None of us have angry earth ward. We did use the Basic Trophies, Coatings and Common Honing Stones though.

Is this supposed to be one of the dungeons that NWM progression will be tied behind after next patch?

Sounds like huge amounts of work: make orb takes hours, then find all the honing stones, coatings, and find the things to make the trophies (and then remember to switch them out in three different houses each time you’re going against something else…).

I guess for most players this will be a solid miss. Especially as repair costs and failure are way too time consuming and expensive.

They need to bring in modes for expeditions (easy, normal, hard) and make orbs way easier to obtain.

I ran this dung twice today and twice yesterday and dont find it TOO difficult. Is it harder than amrine? for sure. We left just a tank + healer inside the orb and put 3 DPS outside to destroy the mobs instantly. the tank and healer had to stay alive and that was it

Yep. Some groups are going to do better then others. Some can push out higher DPS or dodge mechanics better. Some will have different perks on there gear then others. Lots of many different things will add up to create a better run for different people. Not everyone will need everything i listed previously but some might need it all in order to get going.

No one is perfect at any game but there is some that do really well. That is great though that non of you had no ward… i know i did as the tank… and it was crazy how much you absorb and tank very little dmg.

Okay, so what I’m hearing is that we need to have all trophies and specific mitigation gear to clear this dungeon.

You really don’t. What that guy suggested is overkill.

I did genesis 2 days ago and only wiped 4 times on the first boss and around 6 in the second and that was only because our tank was being distracted on the last boss and we beat him with just a healer and 2 dps alive and 2 of us weren’t even able to talk and 1 wasn’t in the call so it’s not that hard and asking for it to be easier just makes endgame content stupid easy.

With good party you can ignore all mechanics and do it under 1 minute. 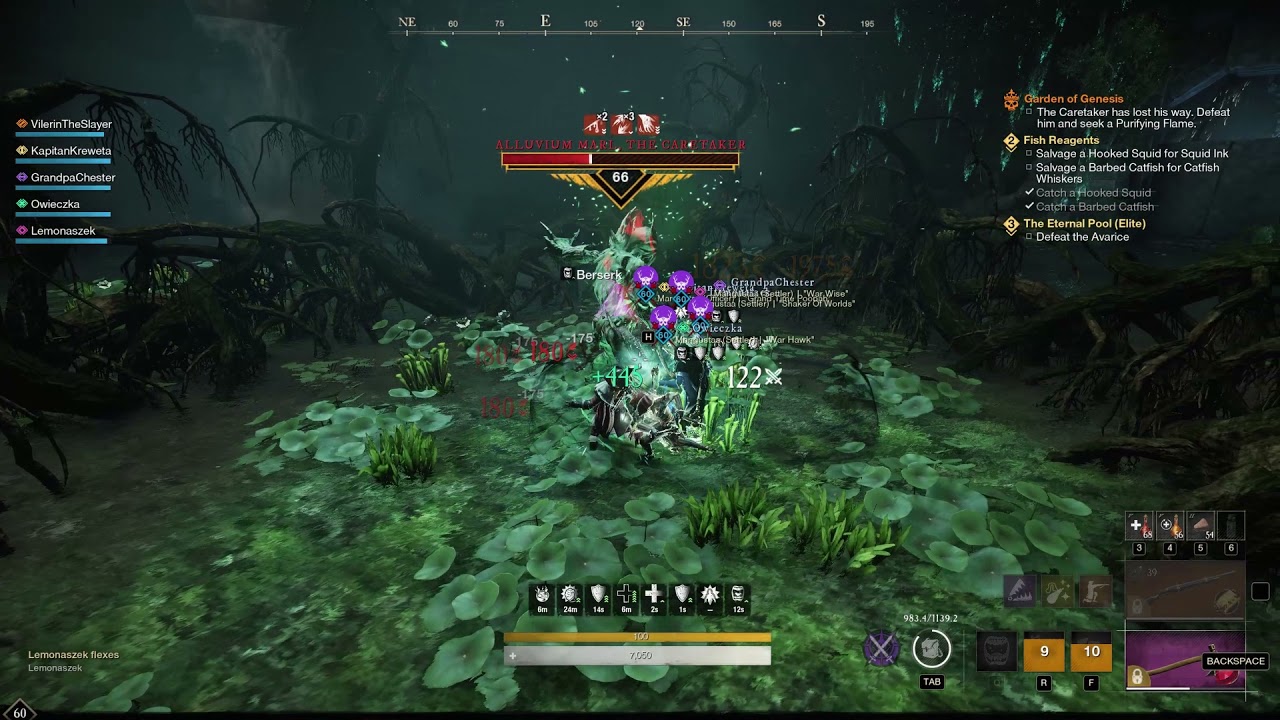 With proper buffs you can hit him for 6k in full luck gear - hatchet - no exploits or bugs used. If you are strugling I would advise:

In case you have weak tank, add one DPS to him for faster interrupt.

Make sure that your DPSes deal proper damage type - Slash or Fire and avoid Thrust or Lightning.

Rest is just dodging and not beeing greedy.