I defend every weapon in the game that i see fall behind a bit, and this time…its the hatchet
I know there will be some biased because of hatchet(skitzo) build. HOWEVER

Thats is also one of the primary reasons why hatchet isnt used in medium or heavy gear.

The worst part is you can swing at a person right behind them and the hatchet will keep missing
so in most cases you are forced to use some kinda boost to catch up and hit.

So thats a problem.

It was “improved” a few updates ago but I didn’t notice any difference really. It needs to be increased a bit more and the hitbox on throws needs to be looked at as well.

I defend every weapon in the game that i see fall behind a bit, and this time…its the hatchet
I know there will be some biased because of hatchet(skitzo) build. HOWEVER

That build only worked because of SnS stuns. It’s easy to hit a stationary targets.

Melee in general is just really bad right now for a multitude of reasons.

PTR will give it a little bit of love with the new hit-slow changes, but it’s still going to be pretty miserable.

One of the main areas hatchet in particular is lacking is that Feral Rush is just really bad. It’s outranged by a single dodge roll so you can’t even counterplay the dodge, and 90% of the time you can hit a player in the back and the root doesn’t trigger. On paper it looks like a tool for catching players, but it rarely functions that way.

The worst part is you can swing at a person right behind them and the hatchet will keep missing
so in most cases you are forced to use some kinda boost to catch up and hit.

If you’re going to be using hatchet left clicks, you really want to use it with GA, WH, and/or in medium.

Medium melee homing is straight up broken and makes hatchet a lot easier to use.

Fucking lol. If you possess any GIF wizardly please add a light armor rapier player rolling in, popping riposte and stunning one of them.

Melee tracking is shit and hatchet is the worst, even in PvE. I try to conceptualize it as the hatchet is only there for weight and the real attacks are all elbow strikes.

The same thing happens to the Rapier, it is almost impossible to hit the opponent with light attacks.

Honestly it’s the only weapon I can’t seem to handle because of the weird tracking. It has a lot of utilities but man, hitting air like a sushi showoff chef sucks. Specially when you do it right in front of whoever you are trying to hit, then proceed to get detonated.

Here in lies the problem. in off brand metas, the hatchet’s on hit abilities are lackluster and don’t provide what it sets out to do. It shouldn’t be a lot easier to use in certain builds… It should just operate as intended.

Both Rapier and Hatchet both need a solid animation rework. Half their abilites have poor on hit connection and thus are rarely used or used ineffectively.

This shit bothers me so much in OPR. I will land frenzied rage dead on someones back to root, no root. And the rare occasion it does root, the root ends when they dodge. WTF?

I hope the devs will consider a fix

The fact that the weapon was only useful when the victim wasn’t in control of their character should have been a huge red flag for the combat team.

This weapon can be avoided by walking in a circle, I’m serious.

Throwing hatchet too stonk. Needs some hard nerfs if anything imo

Hello @Julezer in your opinion what needs to be looked at for the hitbox on the throws. Would love to hear some input on this.

So does rapiers tracking, its terrible

I play Hatchet from time to time and the weapon is overpowered.
Do not improve but leave it as it is or weaken it

Take a friend and have him run laps around you(next to you) without dodging. Hatchet will hit a really low number compare to other melee like axe, sword, hammer that will probably have a 100% hit rate

there are plenty of people who do exceptionally well with a hatchet.

I get the feeling a lot of people are only using it for Undying and for the ‘shieldbash/root on backstab’ combo… it’s a very short range weapon that offsets this by having amble tools to close distance and trap enemies; what exactly do you expect? If you’re only popping berserk to escape then you’ve only yourself to blame

Right now landing hits with basic attacks on moving targets in PvP feels like a miracle most of the time.

Make Aimed Throw basic attacks 120% damage and/or match aim of bow/musket with either hitscan or an increased hitbox at closer range.

Infected throw also needs a buff to the point where hatchet can fill roles other than pure glass cannon in wars. For starters increase Aerial Transmission (cloud) duration to 10 seconds to match Sacred Ground’s 12 seconds better.

there are plenty of people who do exceptionally well with a hatchet.

I agree but there are some rules I consider

I’ve been using hatchet for about 5 months now, my advice is one of these must be true to take advantage of hatchet light attacks

A person sprinting circles around you, you’ll miss I’d guess 80% of the time, I usually use another weapon to make them stop sprinting or Social distancing as my “engage”

Hatchets tracking/homing greatly improved last patch, they’ve made it “home” after each light attack click instead of just the first attack. They should consider using this same tech for more melee weapons imo

I made a video from this patch of Spear Hatchet gameplay, you be the judge of hatchet tracking 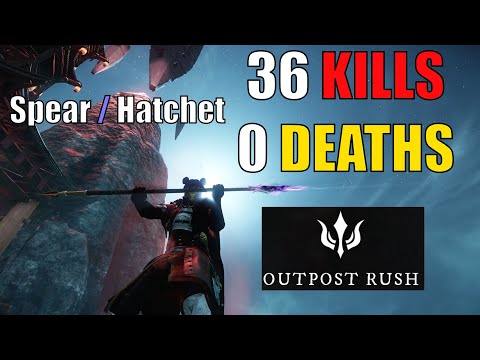 I think it preforms quite well and I’m vehemently against defy death since it was added. Atleast we can purge it with VG oblivion now