Day by day, things are getting worse when more things comes out of shadow… 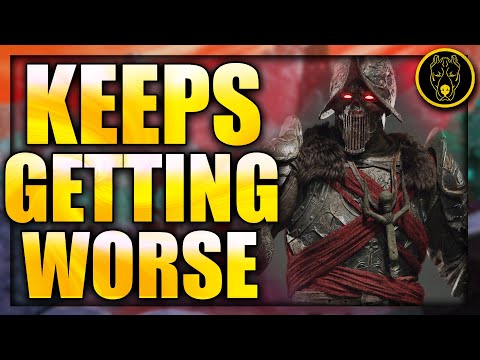 Wait, so the damage bonus of light armor doesn’t work? Did I understand that right?

The damage bonus on light armour has been explained to death on YouTube, Pritch gaming shows how it works with accurate formulas.

The bonus damage is applied to the base weapon damage of what you have equipped.

You do not immediately do 20% more overall damage by equipping light armour. No.

The entire tooltip and perk system needs totally overhauled by someone (ONE person) with a tighter grasp on what wording should be used. To many people doing tool tips results in wording choice all over the place.

They are so terribly subjective right now and all over the place.

% damage buffs work so bizarrely in this game.

Some multiplicative. Some additive.

Watch Pritch for his in depth explanation.

Yeah there’s a lot of stuff that has to be fixed, like honing stones - it says increases weapon damage by 200% for a tier 1 stone, it’s actually supposed to increase it by 3% or 4% it really confused me for a while

Well I guess my intel build is moving to heavy armor. I think the only issue I’ll have is losing out on the mana gain from rolling.

Heavy armor still have a dodge, you will still be able to get your 10 mana back. It’s iframes feel even better than light rolling for some reason (you are immune during the whole weird crouch stuff animation)

Good news, you don’t have to roll to get your dodge passives to work. The heavier armor weights dodges are smaller, but still are dodges and you will get your mana.

Awesome. Hate that i’ll have to run like 100 faction quests to get the armor, but it is what it is

The argument isn’t about how many dodges you get. With dexterity you always get 3 anyway thanks to perk.

The argument is how much benifit heavy+resilient+onyx gives over light / medium in any group melee where you simply cannot avoid cleave damage.

The damage bonus to light should FEEL like a bonus. Not it’s current sorry state.

Light should have increased magic resistance.

Make medium have a flat 15% (or similar) resistance to all damage types. (Slash/thrust etc)

This would allow players to decide whether they or wear heavy to brawl. But fear magical damage more.

And allow medium to have passive absorption to all special damage types.

They need to have pros / cons to each armour type.

As it stands. Heavy wins every time. In no scenario is light/medium better in group PvP.

Wow he made a really good point about the ‘try hard’ player base. They really do act like a mining canary for developers and for the community as a whole.

Most people in the community will shame these types of players and belittle them for playing as often as they do. Most of the time ignoring their feedback for some reason or another. Meanwhile its these people who find the most bugs and exploits in the game before anyone else and makes that information public. These people more times than not are playing a worse version of the game than we are and it’s because of them that bugs that we never had to experience got fixed beforehand.

Meanwhile its these people who find the most bugs and exploits in the game before anyone else and makes that information public.

Hopefully you arent offended by such directness, but this is a painfully naive belief.

I am not offended. My belief just came from a more mathematical approach. In my mind it would be more plausible that group of individuals whom collectively put thousands upon thousands of hours into a game both testing and touching up most if not all the content a game has to offer would be more likely to come across bugs and glitches as opposed to a group of people who have either A. Not even be able to experience all of the content in the game or B. lack the general knowledge and experience to understand how a bug might occur thus making it more likely they would not attempt to theory craft or make their own exploits.

But I am a bit open minded so if my ideology is truly wrong then I will be more than happy to change it.

The naiveté GrayJay might be refering to is from the fact that you believe that they make the information public.
One doesn’t put thousands of hours into a competitive game for serving as beta-tester. One does it to win.

They mostly don’t share information about exploits they find. Most glitches and bugs found in software nowadays are exploited for the finder’s personal advantage.
That is why companies usually award hackers with monetary prizes for finding exploits in their software: to encourage them to make those exploits public so that they can fix them.

In this game, most of those exploits have been known for weeks-months, kept secret by a few, who used them to take over regions with their companies by winning unfair wars.

Only now, when the hype of the game is dying and some people are losing interest on the game, quitting, or taking a break after their companies have bene steamrolling over their servers for weeks, the information is finally leaked.

Be totally sure that next exploit that is found, it will be taken advantage of and abused for weeks until anyone decides to finally alert about it.

Oh cool. Thank you for the information and the interesting point of view.