I freaking love these guys

This video update made me smile. Keep it up guys. 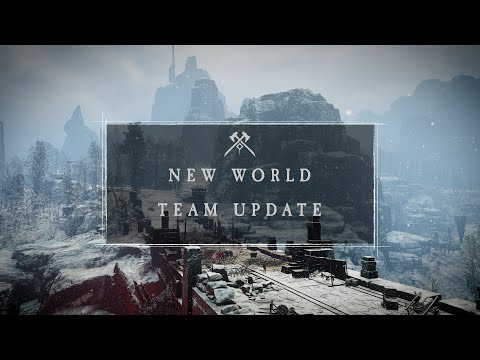 Yes its a great video! Even if we can’t agree on everything (anything) at least it’s nice to so developers talk about the game we love (or hate)

“We need to close this chapter on the Isabella story”…

wait wtf… their is a story. Outside of the opening movie, there is no story guys.
If you honestly think your player base of PVP players is going to take the time to read your walls of text pushing the narrative forward…er… um… hate to break it to you… .

EVERY SINGLE GAME DEVELOPER EVER HAS LEARNED THIS ONE BASIC LESSON.

If you want gamers in 2021 to actually KNOW your story, you have to push it with full video and audio.

BDO… WoW… FF… all learned this and know this… please accept the fact your game has NO STORY… and either higher a writer who can give you a story, or just give up on it all together and leave it what it is…

I enjoyed it. But I tend to not focus too much on the negatives of a game. There is always something fun to do in NW, and if not, go make some fun. I actually found a level 7 person in game yesterday and gave him some gear and showed him some things to do. What a welcome respite and memory of things that inspired old school MMOs like EQ.

I also on occasion find a new player randomly in the world and show them around some (Even show them a portion of my coveted iron run) as well as give them some coin.

EDIT: To the original post I agree that we need cinematics in the game. If you do read the lore (yes I know not everyone wants to) there is alot of good stuff, just needs to be presented better.

I agree. I think they need to focus on making more video cut scenes of the current story they already have. I have no idea what’s going on tbh.

“We want to balance both PvE and PvP and instead of them coexisting with each other we want them to compliment each other, we don’t have a favorite child in this one…” ~ Scot Lane

Soooo, why does everything with gear/weapon buffs/nerfs balance revolve around PvP and ultimately affects PvE gameplay because they are not separated by content? No PvE player says “Please nerf the Great Axe Reap against Level 65 Elite mobs, it does too much damage!” Not a single person. PvP lynch mobs effect PvE gameplay because of the nerf’s in PvP. Unlike WoW, where there’s separated buffs/nerfs for PvP and PvE, because, again, separate content, they don’t collide with each other. This needs to happen in New World because not for long, we’ll be hitting L65 Elite mobs with wet noodles. You can’t buff the Elite mobs from L62 to L65 including shield and HP without increasing players power. More recent than not, for two months, majority of the most used weapons are nerf’d because of PvP, not PvE. That’s not how you balance two separate content. You can’t just blanket nerf PvP content and allow it to spill into PvE. That’s not balance.

Overall, the video was very informative. Glad this is a step forward in communicating with the community and look forward to next years content!

Same, except I crafted a bunch of level 60 Jewelry~ Tools~ etc. and gave them out to fresh elvel 60s/60s that didn’t have gear with as high of a gs or stats they actually needed. It was nothing I needed anyway, considering i’m just trying to level the trades. I may as well give to someone that could use it rather than try to sell/(waste money trying to sell if no one buys) or salvage.

I mean, its also Christmas…I got called the Santa of New World

It feels nice to help others sometimes instead of just being toxic and trolling/griefing other players…if only more people would try it…maybe everyone would enjoy the game more and stop complaining as much.

I’m not saying there isn’t time for pvp and dominating the other factions, because there is, there definitely is. But…you may as well help those in your own faction at least. I had people in my old server help me out crafting gear ( I brought them the materials of course) so I try to pass that on as well…sometimes even cover some/all the mats…since I’m still leveling trades anyway

Well, I heard some amount of “mea culpa” however the “we will improve, we are fixing this” gets old and smells a bit too much like PR-speak.

In reality, if we worked together that wouldn’t be good enough. I’d want to know there is a detailed plan going forward to resolve these problems and ensure they don’t occur again.

I can’t say this absolutely this isn’t happening, but the track record of recurring issues tells me that the system is flawed. The proof is in the pudding.

There are still more bugs in every release. There are still unfixed bugs since launch. And we’re talking major progression, quest deadends, incorrect items, quality of life, game UI not displaying correctly, permanent buffs/debuffs and duplications - like serious stuff that absolutely requires fixing. These have not been fixed.

I mean they just introduced the “store all” BUG. This makes playing in this patch a pain in the ass. But every release introduces new problems.

No one will always agree 100% with each other. Even if it all makes sense to you, it may not to someone else. Also, them being a different game I’m sure they are not trying to copy another mmo completely/cookie cut their game. That being said, in my OPINION I think some of what you said is true. They should have specific perks/mods that only apply in pvp, and should have some sort of pvp token rewards to get basic-mid, maybe even end tier pvp gear(Or make it so you have to buy/craft/know a crafter to craft your pvp gear.) If they just did pvp tokens~ it would make the more explicit-pvp players play more. If they made it so you could craft high tier pvp gear…it may help to boost the economy as well, but you may not necessarily have to pvp like crazy to grind tokens to get better pvp gear. I think for the game overall it would make more sense to make it craftable/sellable to help the economy and add a more broad spectrum of item abilities/unique perks…and maybe most importantly, more content to the game AND add a pvp shop with a token system to get decent pvp gear as well before you are able to get high tier/end game pvp gear crafted/bought.

wait wtf… their is a story. Outside of the opening movie, there is no story guys.

There is a story in there, short though it is thus far.

If you honestly think your player base of PVP players is going to take the time to read your walls of text pushing the narrative forward…er… um… hate to break it to you… we didn’t.

Reading is hard for PvP’ers.
(You set yourself up for that.)

Yap, they were axe and hammer heavy players.
And notice how meta is shifting to bow? Thats cus devs are slowly switching to bow, and musket.
They buff the weapons based on what they are currently playing.
Lol

why is there so many negative Karens. Go play another game Karen your negativity doesn’t belong here.

I set myself up for nothing.

If you take the time to read the notes, you see it is just a bunch of random logs about random events around the area you are in… there is no overreaching narrative pushing the player from zone to zone that you are aware of at anytime due to small in game cut scenes or voice over.

The best way to get a player to know the story is to captivate them with some type of movie. Doesn’t have to be much, but something to que the player in to focus for a second and listen while you are handed the next layer of plot.

What we have now is nothing more then a base plot, with no point… like I have no idea why im in SM fighting against the corrupted. We just know they attack us, so we kill them… but what about all the story for these named mobs in there… who is the big bad guy in this world… if any… IS THERE EVEN A POINT to fighting the corruption since this isn’t our homeland… just some place we are ransacking for it’s precious resources and azoth…like take a step back and just realize how crap all of this comes together as a story.

The developers having fun and enjoying the game is always great to see, no matter the game.

Excellent attitude. Never played EQ but I was an Asherons Call player back in them days.

Agreed the video was great. Yall have created an amazing game thank you.

Idk man but main quests are 2-3 lines of text each time that are fully voiced and just from that you get the idea about whats the main plot is on the island.
Side quests having voiced one line is kinda bummer and yes almost nobody really reads those blue notes, despite them having sometimes nice info.

I mean ive completed full chapters and they do help the immersion. Maybe you are not getting all the pages man. The story from the side quest you do also explain alot. Maybe go back and do the low level quests you skipped? There is a story being told.

We dont know who the Big bad is yet. Games still pretty new

Why are you even here posting? If you have such a bad attitude to the game don’t TLDR in someones thread just go play another game.

Some people just cant be happy. They always want more and will cry and wine in someones post just to complain (with nothing but garbage comments).

Go complain in Starbucks Karen, this isn’t the place for you.