Why and how is this not getting through to the devs yet? (uh good ahuh uh)
Why are we still seeing pushes towards new content?
Why is it taking so long for Desync to be fixed even if it’s just a little better vs pushing new content while Desync is a major problem? Now we have the stutter madness going on while the Desync is so heavy…

If I see the new content drop before any of this is fixed, I’m honestly done with NW… and I love this damn game, but this direction is nothing I want to be apart of.

I like all the weapons, and armor. the graphics, the immersive nature of the biomes, the build capabilities, the theory crafting of said builds… But I can’t handle it with the desync alone.
Why are we still seeing the push of new content being thrown at us before all these other issues are fixed? Why is the current/old content being balanced around Desync, knowing very well once desync (if ever) is fixed, those balances are going to be unbalanced yet again.

AGS I admire your efforts, and I appreciate you guys trying to make this game in this era of gamers with our “wants” and “needs” being so demanding, but sometimes, you have to put a halt to fulfilling the needs of new content and fix your foundation so it stands much taller/stronger.

I’m having this deysnched / interruptible combat issue and it makes the game unplayable. I mean combat is the best selling point of this game and they even ruined that too after 1.3 patch somehow.

I mean even Hatchet with Berserk Mode Active (the best PvE weapon for being cc immune) can be interruptable with only “basic attacks”.

And interruption not stop my animation in “middle of the animatiıon” my characters animations resets totally and u need to start a new combo from 0 point.

It even effects when you jump or climb somewhere you literally teleporting all over the place. Or you can drink your potions at the time you want.

This problem is the worst for now.

And I agree with you about “dont push the new content until you fix your stuff”.

Inflence and Invasion systems are crooked and false from its very own core. It need a rework.

I mean for new content you need a solid foundation to build up on it and NW aint have a foundation. Make this game’s base version better, pursue the best of it.

I mean ? What are you guys thinking…

I mean content and all "too damn early call for 600+25 GS) things ruined the game in terms of content pursuing. But this desync/interruptible combat is just ruins all mechanical aspects of the game.

Combat fluidity and combo/rotation syncing was what sold me on this game, PvP or not, even though I love PvP, I just loved the combat style more. then when they dropped OPR the first time because of the perma death bug, ever since then I had the worst Desync experience in NW ever. Then they broke leaping strike to get interrupt by any basic attacks, then they fixed it but didn’t realize that it wasn’t just leaping strike that was effected by this bug. Now it’s literally every action.

I hope they can turn it around but the fact that new content is being pushed instead of waiting on it, to address real game breaking bugs/issues the game has, they will add it soon…

I can’t stand seeing new content being pushed while Desync and this new interruption bug are so prominent. and Desync… I’m not even sure they can fix it at this point. it’s been like 3+ months

With tempest heart update my desync/interrupted combat issues are a bit reduced . Combat still not as good as before (pre 1.2 patch) but its not as bad as after 1.2 patch. It’s a bit more tolerable now.

I wish they work on it and perfected it.

They fixed the interruption bug, but Desync is still bad. so at least there is 1 up side with this patch.
but for sure. it’s way better now. Now all we have is this Desync stability problem for combat. but with the interruption bug being fixed, I can at least log on knowing I wont get a headache immediately.

Yeah the stutter is 100% worse now than when it was. Its even worse when your stamina fills to full it like enhances the stutter to like 500%

I had to test the interruption bug- pulled like 12 of those crawling mobs at mangled, and spammed left click with grit to see if anything got interrupt, and nope. not once

Whoever of the dev team fixed it, fuckin’ Kudos.

Aside from that, Desync still causes all sorts of odd actions… stutters, rubber bands, abilities not going off properly when you timed them to be used- just doesn’t happen if it’s during a Desync. Which is normal I guess for Desync standards. Simple data loss.

Thanks for sharing your experience with the new update! We’ll continue looking into desync concerns!

The interruption bug was solved with the last patch. And i feel the game feels better with less desync,
although it still exists a little, especially with the cc.

The clearest example is that on certain occasions you get rooted or stunned after doing a roll, and your character literally rolls back 5m. I imagine it’s because on his screen I never did the roll.

Spent hours in OPR last night on Maramma and had very little desync, I could count the instances of it on one hand. It’s not gone, but it’s certainly vastly improved . . . at least for now.

The fun fact is, after newest patch I didn’t saw any desync, stuttering or lag. Game working extremly smooth for me. I’ve recorded short video bcos I can’t belive how good it’s now. Ofcourse it’s only 1 minute vid but trust me a whole OPRs matches looks like this. 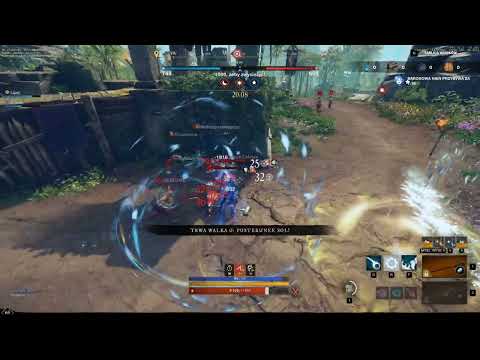 Interruption can be occur at some time to time too. Combat is not fluid as before 1.2 patch for sure. But its much more playable with the current update imo.