I'm sure this wont be abused 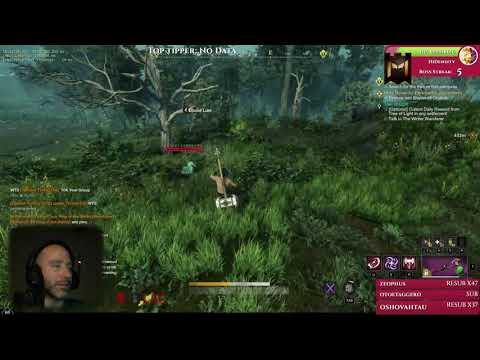 Dear lort. Will it ever end?!

It’s kind of annoying to see posts like this come again and again… sure it’s a tiny tiny bug, but come on this just raises the game’s skill cap. i would like to see more ani-canceling affects such as this to help create a more creative PVP environment.

i can already see this being the new meta engage to conserve stamina until you are right next to your enemy. think it’s too OP? Well, try side stepping. from the video you can see you can only move in a straight direction…

Naw all this animation canceling needs to be stopped, its nothing but trouble.

BORING. If all animation canceling was removed, what would be left with? a bunch of unskilled kids running around abusing the same 2 meta weapons.

Animation canceling, simply put, separates the boys from the men. It shows who goes the extra mile to know everything about the game. Individuals who take the time to figure out all the little things like this should be rewarded for the time they have put into the game, not targeted on the forums.

Why am I unsurprised somebody named ‘gopnik’ is in favour of the game being a janky mess?

Anyway, they’ve already viewed things like this as issues before. Your opinion notwithstanding, there’s a solid chance it’ll get wrapped up with those issues too.

Naw it just twitchty combat that can then be used in macros to “skill” your way into thinking you are a skillful “man”.

Anyway, they’ve already viewed things like this as issues before. Your opinion notwithstanding, there’s a solid chance it’ll get wrapped up with those issues too.

Although viewed as an issue, nothing has changed. The game dev’s aren’t going to side with the softies, they’re going to introduce mechanics for the elite players…

Take a look at all of the “glitches” posted on youtube this month alone. Sure a couple of ani-cancels have been removed but at the same time we’re seeing more and more surface. Can you really say anyone is actively addressing this?

I’m just glad OP posted so I can become a better player instead of complaining about it.

“And please, PLEASE don’t post any exploits on our forums” said a community representative while browsing the “Bugs and exploits” subsection.

I can, sadly. Releasing bugs with bugfixes is so par for the course for these guys, I’d be immensely more surprised and emotive if they didn’t ship any kind of content injection of any shape or quality, with a handful of bugs. I would not be surprised to see this in exponents; kill one bug, get three. Kill three, get ten. Kill ten, get twenty-nine.

Do they want cancels and other jank shit in for people on toasters to feel like they’re playing with the rest of the players? Eh.

Nobody even knows what they want from this game because they won’t fucking say it. So who knows? Not you, not I.

This is due to the slow bug so you would first have to get it then just like in the video roll while light and dolphin dive and you will gain speed. It something that can just be done at will.

Do they want cancels and other jank shit in for people on toasters to feel like they’re playing with the rest of the players? Eh.
Nobody even knows what they want from this game because they won’t fucking say it. So who knows? Not you, not I.

What they want is to make as much money off of this platform as possible. Crazy, sounds like any other game dev, yeah?

In the end, development team will side with the players who throw the most cashmoney at the game. Luckily this game is being driven as a more hardcore pvp MMORPG. I think it’s safe to say if all of these so-called “bugs” were removed, they’d be shooting themselves in the foot, rather wallet.

I love watching this guy. He finds everything broken, busted, or not what’s stated in game correctly. Percentages, buffs, etc.

He tests everything. Very very informative. I’ve learned to read patch notes and then go watch his stream to get the actual math, numbers and issues.

It’s weird how some people equate using unintended exploits of the game’s combat system with skill.

I mean, there’s no data suggesting any kind of correlation between people who spend money and people who use jank (colloquially), so I’m just gonna kinda… bump that statement for you.

I think we’ll have to see if they actually iron out the jank. If it was lip service, it’s probably like you said. If they do nail it, it’s probably like I said and even if they wanted to fix it, they just can’t launch anything without it also blowing up.

Oh, and if they wanted to make money, they might want a cash shop that isn’t so… uninspired. If I’d buy any theory, it’s that they want minimal input for maximal output, so they’re taking the shortest cuts to anything they can in order to save time (and thus maximize the yield of the output to them).

AGS should’ve offered him a job months ago. Would’ve saved them a few embarrassments.

Dear lort. Will it ever end?!

How many years of Alpha with new issues always arising and being discovered? They just cannot fix the game.

Yeah man. he’s very analytical and keeps track of every detail on top of being well spoken and organized, coupled with the ability to play this game constantly and try to break stuff. He’s doing the work of of 10 players in my opinion and having fun doing it.

Also, this game never ceases to surprise me.