Just make a survey about muskets!

I bet everyone except musket players will want this weapon deleted from the game. This weapon ruins the whole combat system in the game, haven’t you noticed yet?
2-3 muskets from the 2000 range combine to end open field fights and close combat. There are also many, many aimbots. I haven’t come across a hit miss musketa yet. If anyone comes, write here.
The clear and clear musket should be deleted from the game or if you want it to stay, the damage should decrease a lot as you move away from the range.

As someone who hasn’t had much opportunity to pvp in this game, I personally think muskets are incredibly underwhelming. I recently switched to bow, and I doubt I’ll ever go back at this point.

What little open world pvp I did before Endwalker released, the damage output was inconsequential at best at level 60 against level 60s but I never had BiS gear so… /shrug

There are also many, many aimbots.

Cant agree with this part. I think most if not all top musket players are just very good fps players. Thats why they hit like 8/10. But rest is true. Feeling for all other players is super bad. You have nice fight close range and out of sudden “pew pew” you dead. Was musket works now is just annoying all all 99% of players that do play other builds.

There are aimbots, yes. But not as much as you think + buying an aimbot for this game is stupid since you cant kill anything with one shot and low rate of fire.

Muskets users usually go all in for damage = very little Constitution… i think the solution would be adding “Bullet Travel” to the Musket, not being “hitscan” would be the main balance imo. Don’t even care if they don’t add “Bullet Drop” so it can differentiate from the Bow a bit.

Im not a musket player. Here is my survey answer… improve it so that it isn’t dog shit outside of one thing in one mode. Musket is mostly a crap weapon that is good at one thing. Irritating OPR players. Thats about it.

I have ran into maybe two players that actually play the weapon well in mid range combat. For all the talks of people being “1 shot,” I run light armor with 150 con. I have been one shot never. Not even two shot.

Muskets should either have damage dropoff or bullet drop like any long range sniper in any other shooter. Shooting hitscan bullets without damage dropoff from 100m is kinda nuts in a game where combat predominantly happens within 20m.

As a musket player myself the damage to light armor players can be nasty but obviously we need to sacrifice con so we end having either 50 con or 5 which make us fodder to everyone in close range.

I never liked the hitscan mechanic tho. However is not easy to hit a target even if you are the best musket in the world: desync, latency, the bullet is only as wide as a pixel, render distance bigger than musket shot, human error… makes it a skilled weapon to use with poor rewards for the casual player.

Im ok if you want bullet travel but then give the bullet a bigger hitbox, maybe 2 or 3 pixels wide instead of 1 and pls we need armor pen, we can 2shot a non resilient light armored player with 0 con but a heavy with resilient full specced into anti-musket gems can take 10 headshots easily.

This weapon let you combat without need to run any risk. And if someone targets you then you can use rapier to flee and find a new position.

Trust me. Go glass cannon musket and you will see how easy is to kill people or weak them.

Was fixed a couple months ago. Obstacles that you could once shoot through, you no longer can. Even then, was only a couple trees and 2 rocks.

5-50 con is max to make musket viable. Even then, resilient, physical eversion, and even elemental eversion, makes the musket hit like a wet noodle. I troll most muskets in my light melee set. Some are genuinely good…but maybe 1 or 2 for every 20.

This no longer applies as of patch 1.4 - this was patched and no Musket has ever shot through anything these days.

This weapon let you combat without need to run any risk. And if someone targets you then you can use rapier to flee and find a new position.

Have you met the SnS+BB enjoyer yet? No one is safe from this, most especially Muskets, they just get leaping struck from behind or while shooting someone and dies to one shrapnel blast. It’s not that hard to kill a musket because they’re built like glass, you just need to learn how to PvP better.

Bow beats Musket in terms of AoE pressure, Musket only has one AoE ability and that’s the sticky bomb which, people can easily iframe. Meanwhile the bow has access to Pen shot + Rain of Arrows combo that literally deletes clumps and poison arrow for that extra dot pressure.

While they may be annoying, in no way do I advocate for getting rid of them. And I don’t think there are that many aimbots. I suggest they nerf the 3x scope.

Sure bro,
let me show you a glimpse of what the Bow can do (this is on LIVE, clipped as of today from one OPR game) 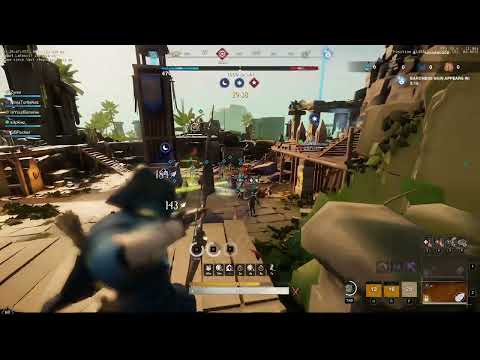 If you think the Musket can compete with this overwhelming burst AoE pressure then you sir, are playing a different game.

And let’s also not forget! Bows are buffed EVEN FURTHER in the PTR! I’m not against it but I’m just gonna show you why the bow is still better than a Musket in any group fight.

The only weapon that needs removed is great axe.

You hit a few people for 2-3k damage with rain of arrows and then a 5k pen shot. I assume this is the video you were going to message me with earlier to show that bow was fine and didn’t need anything.

I agree with you about musket. That weapon just needs some work. People have a problem with anything in this game that they can’t just left click slaughter.

The musket should not be removed. It should be reworked & tuned properly.

The trapper tree for example has much more potential than simply running a dps. Trapper is very useful in running support. I would rather they do away with the sticky bomb & Stopping power, replace them with a land mine that applies rend & shrapnel charge (claymore) that applies weaken. Thus creating instead of Trapper → A Sapper.

The musket itself unlike other weapons to maximize it’s damage requires 300 Dex & 200 Int, greatly sacrificing all survivability. Being caught is a death sentence. The bow however can run on 300 Dex. The mage weapons all can run on 300 Int. 3/2 Muskets are the definition of a glass cannon. Why people still can’t understand this is beyond me.

Cheaters will exist with or without aimbot. if Ags gets rid of musket, they’ll just use it on other weapons that have a straight projectile. Then what? Remove all range from the game? AGS needs to develop a better anticheat & actually crack down on exploitation. Not remove a weapon because of the actions of a few.

Personally I rather Fog of War be added. Require snipers to have spotters. Changes the scope of battle a bit. However even without FoW, snipers can be caught off guard because of their tightened FoV. It’s a matter of choice whether people choose to or choose to demand removal on the forum.

I don’t know about deleted from the game but yes aimbot seems to be a very strong issue , I would say a strong overhaul not necessarily a nerf but some kind of damage drop off and a max distance would be nice .

Yes, just showing this clip that proves Bow IS superior than Musket in “group” fights and smallscale short-range skirmishes due to Bow having access to more health (150-200con) but the Musket is better at “single-target” kill-potential, or atleast, Musket is better at last-hitting low-hp players at a more consistent manner.

Overall, the musket is not OP, it just needs a rework.

Yeah, I don’t know why anyone would think musket is better at group damage than bow lol. I know a couple musket users that excel at med-short range small skirmishes though. They are very good though and I can hardly hit them. A better bow player than me would probably do better against them though. Bow is also really good at last hitting because it can do considerable more damage 30% and under health.