Hey everyone. Here is the latest rendition - 12th episode but really my first full week back into dueling after three weeks off and my god it was rough. 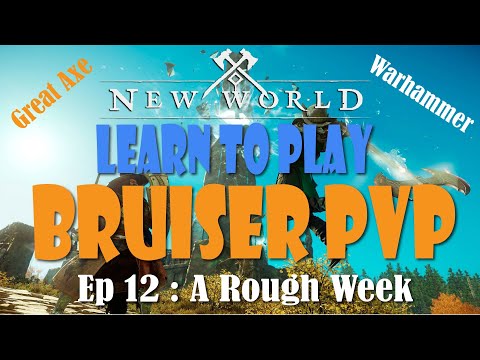 lol ‘boing’ back to that - great accidental pun:)

I played bruiser because it was a chance to learn something from scratch. I don’t know havn’t really thought about it. My aiming was never so good on the bow but certainly something that can be improved. I think they have overbuffed bow this coming patch so I guess I’ll see what happens after that.

I can’t really say, I went to your videos to see when you started playing bruiser and was just wondering when I saw the bow videos

How about a series on climbing the arena ranks. I know there aren’t actually ranks for arena itself but the new pvp system run through arenas. We have our disagreements but I do enjoy your style of content of you learning different things.

Maybe you can put out things like why you feel comfortable in certain groups and setups. What builds you enjoy most in arenas. What you find tougher/easier to play against in each build. I dunno. Just tossing some ideas out there.

I think that is a really good idea. I think that will come anyways when arena’s come out because it’s definitely something I’m keen on doing a lot of!

I swapped to bruiser after 1.5k hours as healer. Im a few hours in and make it to Top5 in OPRs on Dry Tree almost every game.
Takes a short amount of time to get used to all the stuff, but then its rly not that hard. Might upload a video soonish with some clips

Edit: I didnt watch a single video tho, just some war vids here n there. From each kind of POV like mage, bruiser, healer… But might give yours a try when Im home haha

Depends on whether you have a healer behind you. I found healing probably the easiest to play especially if your only goal is to get top 5 in OPR.

Depends as well. As healer there are OPRs where you get 0 pressure at all, you can statpad to the max with VG off-hand. In other games you have 2 light armor spear freaks and 2 VG/IGs on your ass all the game and have to perma dodge and use Rapier for Riposte, Evade n shit. The second scenario is much harder to play (and to statpad lul).
Tbh Bruiser just takes a tiny bit of practice so you dont just run blindly into “lost fights”. But as soon as you understood this you can go and improve from there. Sure a healer behind you makes it easier to play Bruiser, but thats the same with every class. I also have a friend who plays VG/IG or IG/BB light who insists on me overhealing him constantly