Got “Lag detected” after entering the Amrine expedition. After logging out haven’t been able to log back in for 24+ hours now, my character screen says I’m level 31 but I had leveled up to 32 prior to the lag popup message.

After trying to log back in I get this message “Timed out while waiting for server to describe the world.”

I dont recall anyone mentioning a crash leading to the bug.

For anyone new to this bug, just hang tight. There is a patch coming tonight (3 AM PT) that will (presumably) force a restart of servers. Many of us are hopeful that this will clear the lag detected bug temporarily at least. The bug hasn’t been fixed according to the notes, so there’s a chance it will resurface. Many who have had servers that have been reset have been free’d from the Lag Detected but we still don’t have 100% certainty on this.

Here’s to hoping we all get back to playing after the patch tonight. It’s been an entire week for me.

Here is a link to the patch notes. 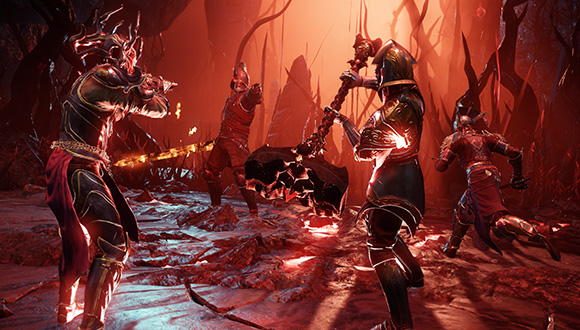 ok thx for updating. Let’s hope for that they fix it tonight so I can play tmr morning.

almost close to 1 week being stuck.
Only problem nothing prevents us from getting stuck again, since its not a fix for the problem.

I may have gotten in, yet I’ve kept following the thread just the same to see what happened and for the ultimate resolution. Here’s hoping the ship comes in for the rest of you all soon!

On that note, I’m happy to see that critical bugfixes “were not” delayed to be released all at once with the full-inclusion of the World Transfer system, even if some portions of it are in here. Players who can’t play at all should have priority over those who simply have to wait to play.

Towards Amazon: I believe your playerbase will forgive you for frequent hotfixes. If nothing else, they give the opportunity for world resets which you may note people calling for in here for a variety of reasons.

@Fostus Can you please whitelist me, I would like to send my logs as well. Cheers!

@Fostus can you whitelist me ? Server EU Central -Pavlopetri… Nick 2GunZ… I would like to send my logs as well… please help me… thank you.

I’ve been 3 days without being able to move, I’ve entered now to see if the patch they were talking about had solved something but nothing, I still can’t play.

My character is called: Mkv
Region: EU Central
Server: Ekera
After entering the game, i can not move and after 3-5 minutes a lag is detected.
VPN or logging in from another internet does not help.

I login at 2am while there is no queue in my server [APSE Region] and the game shows LAG DETECTED and disconnects then it reconnects automatically and again shows the same message, disconnect and reconnect and so on. But after 4-5 disconnects and restarts I can play…

Due to this post [Notice] Intermittent server restarts - #6 by TrevzorFTW
I’m afraid there won’t be any maintenance during patch 1.0.1. They just said it will go “live”. There is no information about how long it may take nor anything about “servers unavailability”.

[Downtime] New World Update: 1.0.1 they mentioned here that it would take Approx.4 hrs

well we’ll find out in half an hour if this is the “great reset” we really want.

Hopefully in the next patch