I have a good pc (not extreme with best graphics card and I am from Turkey) but when I play in the territory wars, I get like maximum of 25-30-35 fps at low settings.

The FPS drops a lot in the territory wars and my ms ping latency increases to +75 ms and sometimes even +90 ms for no reason… We tried to use Exitlag, WTFast, Battleping to lower the ms ping latency and but non of them worked for New World EU region to lower our ping as we play the game from Turkey. I have a good internet in Turkey too (200 Mbps). You can check my post from here: Please would you fix your servers' high ms ping latency problem in New World? thank you . But still, no reply from Amazon to solve this major problem or any replies for this problem too while there are thousands of Turkish players in the New World (I hope that Amazon New World opens some servers that are based in Turkey too)…

Already my log in screen of EU Central shows +161 ms generally and in game it is generally +75 ms too for no reason. Because in other mmorpgs with Frankfurt server like Archeage, Lineage 2, Aion, Tera etc games, my ms ping latency in game is between 45 and 55 (even at war times, it was like maximum of 65 ms). However, this is not the case for New World.

Exploits, ms ping latency server problems, FPS drops etc ruin our pvp and pve gameplay in the New World. I hope that they fix it soon…

Maybe it’s not enough servers to calculate whats going on?
Maybe one type of AoE per team in area? Maybe a cap on how many players a AoE works on? Isn’t most melee weapons an AoE too?

Maybe something needs to be done to force players to spread out to avoid getting into AoE’s? Friendly fire? Maybe higher chance of insta-death?

Maybe the objectives should change to force players to spread out?
Maybe all three points have to be captured at the same time to open doors and two capture points added inside the fort?

Maybe the game mode should change how many players can play in it at a time?

What ever it is?
Its not fun for players who are stuck standing still in place. No matter who wins the match up.

Usually the healer place is behind the point, indeed to be correct the healer is the one that has to be just behind the point and tank and melee forward outside the point to prevent enemies from entering.
I speak to you as a healer, I pass in the spot usually only for 1 reason, if my backline is targeted and I need care I step on the sacred and I heal, or if the situation is calm to the side I move position.

I constantly find myself having to give an explanation of why the map is all yellow on a server, when in reality the only fault I have was that of having prepared myself first!
1- I personally know the game and have tried the healer for 1 year and a half
2-a month before the release of the game I was already looking for the gear I studied the passives and builds as a healer to be used on certain occasions
3- the guild was born as a pvp guild! and she is the only one in the jotunheim server to have said to do only and exclusively pvp!
4-Since the beta of August many of us have distinguished ourselves in pvp and in war, and many of us were rivals to the purple guild, basically in the beta there were some greens who were making war against purple that were purple and other purple guilds important
5-to overcome this purple supremacy, the perlanera have decided to pass yellows (faction with fewer people) so as to hope to have a balance
6-perlanera have always recruited people with specifics in pvp! Many guilds on that server have mass recruited randomly
7- Many guilds in the siege have no organization! the black pearls study the siege before the siege and after the siege!
Does anyone say that the first few weeks we got slapped? It’s not true! the first week of the game unlike many who discovered the game we rushato level 60!
The first wars we made with people at 60 against people at 40, and the dear scaling prevented us twice inside the fort that with only a few more minutes we would have taken to win.
There has NEVER been history in open pvp! Even once I remember almost all the purple faction united against and we threw you all on the ground! We have strategies there too!
We are in pvp from level 1 to level 60 I personally have put pve only 2 times to join a group of pve!
So in people’s opinion I should use the glove bug! the hatchet immortality bug and how much else do you have in mind, for what?
The only thing we got wrong is the choice of the server because it is very evident that there is no competition we expected.

I hope all this efforts and preparation did not end lagging the server as the only winning strategy, that will be very sad. By the way, it is actually sad read all you speaking about your prep as if the rest of us didn’t fight with you and or saw the videos. All this preparation to end forming a 50 ppl zerg and sit it in a point blinding the server until point is taken. Yeah, meritory, GG HF.

Ye, he is only good at talking, take some look at those proofs Perla nera using ice gauntlet bug to male the server lag and become immortals during siege - #68 by sauin

or the yesterday war: Twitch

Ok. Now as you gave more info its more clear what it is about. They did a ninja nerf that was not in the patch notes in the 1.0.2 to the ice strom ability, You CANNOT stack storms anymore, meaning the second storm won’t do damage if it overlapses another. I noticed the same thing running portals with another IG user.

it isnt storm. You cannot stack any damage over time effects or any healing over time effects. This may have happened a few weeks ago. Particle effects might have an impact but it is nowhere near the processing impact of collision based abilities. You use hammer abilities bouncing around players or artillery whilst all the particle effects are going. That is what lags out the server. For all we know the dots and hots no longer working has nothing to do with trying to resolve lag spiking servers

Bump This is still a massive issue. People are Abusing this on our server now

Yeah, this is still an issue that Amazon has yet to actually address, which is utterly ridiculous given the extensive amount of proof in this thread alone. Not my video, not my thread, but my server:

r/newworldgame - Find This a Little Ridiculous 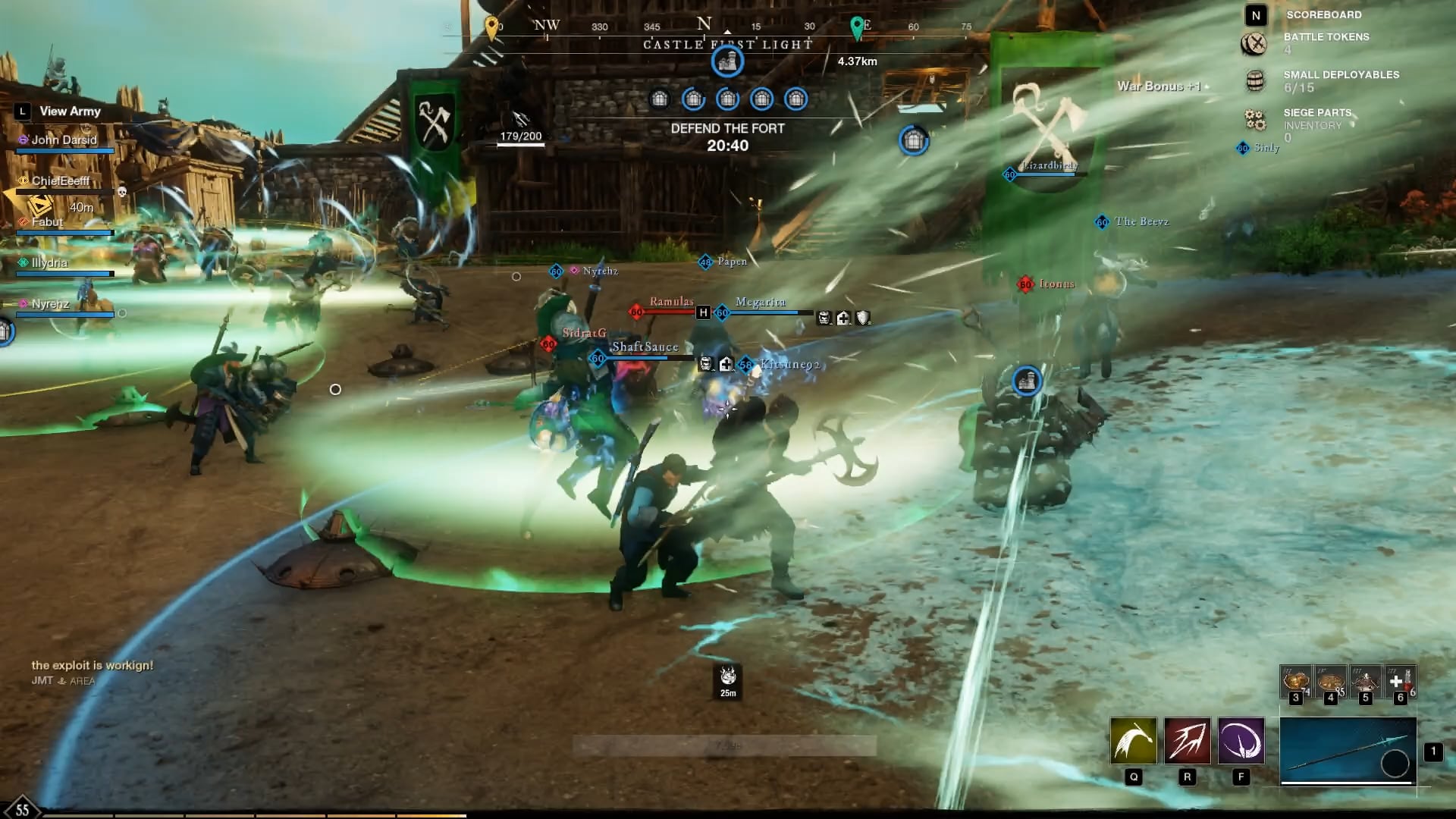 But it is still happening with people insisting it effects both sides the same. I actually found this thread on there and that’s why I’m commenting. over 2 weeks and Amazon is burying their head in the sand over a very prevalent issue that is costing their game in terms of enjoyment.

How is this still going on? I could understand if the lag was random, but videos show it is not. I’d understand if this wasn’t an exploit, but it clearly is and is being used OFTEN. I don’t think I’ve seen a single comment regarding this issue for my server, Vaitarani. Amazon needs to issue at least a statement and possibly reset the maps once they figure it out how to solve it, I think people knowingly using this need to be banned.

Also, please note how on that Reddit thread, there are people from our server trying to justify it. The Syndicate on our server have the following strategy in global:

Bring it up in a joking manner, say it doesn’t exist, actually lay claim that your company did it, but it hurts both sides, and then deny its existence. They have been rinsing and repeating this strategy in Global for days, it’s literally unbearable and I had to turn off the chat entirely.

wait for them to fix it. Enjoy the game instead.

its a little hard when you lose a ton of territory to this and then they crank taxes as far as they can. teleports costing so much just because of lag. if i lost a war to skill that would be one thing but losing because of a desync is hard on morale.

having a team literally sit there and farm you is not enjoyable and makes pvp so undesirable on the large scale.

People don’t know the meaning of “exploit” lmfao. You can exploit pretty much anything. It’s not really about the server lag, it’s about the other players intention.

they did say dont rush to end game for a reason, 2 weeks old. not 2 years. Its a little hard to sympathize with players who ignored the entire game. Sorry. 90% of the people that cry about this warlag exploit…are just pissed off they didnt get into position first. LOL!!!

no sorry im not scum who takes advantage of a lag desync exploit. if you do that’s on you and speaks much of your character. its kinda weird to knowingly want to cheat and “lol” because ooooo mad because you didnt do it first, no shit. im not a cheater.

if i lose war its because i was bad and the enemy team was good. i dont want connection to dictate that via desync. its truly that simple.

Yes please, this has been happening on my server too - Oponskoye. We have wars run by a certain company all end up super laggy, and they run majority life staff, because they know it causes issues. Today was a great example, first war in everfall - 0 lag. second one that they ran - defenders unable to move from lag, where they split the army and put their groups on a different point than the pugs so we cant watch them all spam lifestaff circles to lag it out. It has been the only way they win, and they like to think they are elite because of it.

Without the perspective of the person shooting the cannon you cannot say it disapeared, at most you can say it didn’t render all the way, but it probably did damage and pushed players, i know because i am a siege weapon player in all wars i’ve played ( almost 30) and inside the circle things dont render for anyone, but everything still happening, so instead of complaining about a problem related to the rendering capabilities of our graphics cards, you guys should learn how to play arround it.

I can say that the cannons 100% of the times register the hits, without video proof with the perspective of the person shooting what you say is just an exageration of a problem with rendering, not desync, i’ve played canon and point and can say that even though everything seems stopped, everything i do still counts.