This same issue is affecting me, I was able to narrow down the actions to reproduce, listed below along with my info.

The same issue here too! This can be easily repro’ed, just go into a populated area ( any settlement should work ), cast a targeted heal, and just mouse scroll back and forth across PC’s in your area and it will crash eventually with the above null ptr message.

Just got the same bug.

It was already the case in the beta as well, with the exact same error.

Still having those kind of crashes while having 2+hrs queues in baffling.

So I am using an EVGA XC3 RTX 3080TI, I’ve noticed that it hits really high temps while playing New World. i enabled the FPS limiter to 60FPS. When I did this, I played the entire evening yesterday after the adjustment without the crash happening again. Was it a fluke? Maybe. I will continue playing today and see if the issue is avoided, if so, tomorrow, I will disable the limiter and play and see fi the crash occurs again.

Well I just crashed and its not the FPS limiter. I do now realize, a pattern though. It has been happening when rapidly scrolling up or down in CHAT or Trade Post Listings. Can anyone confirm this? Life Staff - mouse scroll targeting causes the same crash error for me.
This occurs when you scroll through targets too quickly. I use a Logitech MX Master mouse, which has a free-spinning (infinite), hyper fast mouse wheel.

Does it have anything to do with people in PVP? I have never ran into this Error until today and I targeted someone (jokingly because I didn’t think it would heal them while they are dueling) and that’s when I got the crash

I have wondered about that as well, Luesael. It does seem to happen more when there are a lot of people around and often times with pvp flagged people; however, I have had the crash occur when I did not notice anyone else around.

I have the same issue, I posted a method on the forums that reproduces the crash 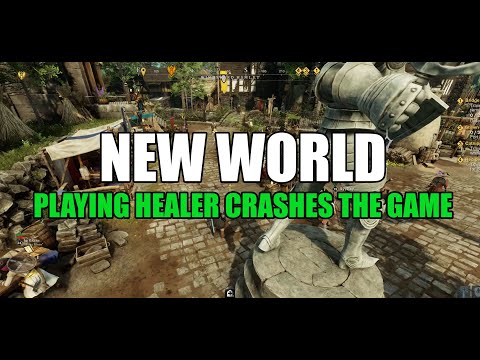 Has this issue been resolved?

I have not seen anything official about this particular issue. The update notes for the last patch did not mention a fix if I remember correctly.

This has still not been fixed as of today, I continue to only use non-targeted healing limiting the abilities I can choose to only 4.

Had this at the start of the very first and only war i participated in, never in expeditions, so i guess it might be tied to the number of potential targets ?