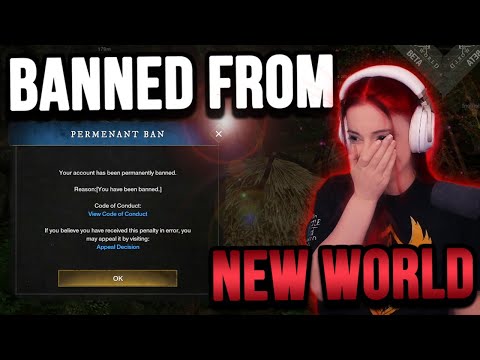 This is quite amusing I’m not going to lie.

Last week, exactly the same day that the patch came out. As soon as servers came on, a thread was created by who I will refer to as cheaters.

In this thread, the poster said that when he tried to enter the game he got booted to the main menu. He included a photo of Amazon support stating it is NOT A BAN and a issue the devs/tech team was investigating.

Sure enough, in the logs, Error 50 Ban 0d was in ALL of their logs.
Two days go by, thread gets closed with no message from Amazon support to why, all those accounts get ingame messages stating their account was permanetely banned for cheating.

A lot of people from what I can see on reddit appealed, and all got declined.

it is clear here that:

a. Amazon Support stated to those people in that thread that it was not a ban and was an issue the developers were aware of

a. Amazon Games have a anti-cheat/flag system that blocks players from logging in after patches (Ie ban waves) but does not actually pass the information over that these players are banned until a developer manually processes this

b. They are doing this in an intelligent manner, ie block cheaters out of the game on patch days, and then deliver the bans to all accounts in bulk.

There is no other explanation of this. Correct me if I’m wrong, but all of this points to a ban for cheating of some kind.

Lmao I SHOULDN’T HAVE TOUCHED THOSE DAMN BOARS!

how do you check the logs ?
I don’t have a New World file in my AppData->Local

Normally I would agree but apart from a few boars I’ve not ran anything or done anything against TOS.

I only have the error 50, no idea what the other errors are you are getting.

I linked it above, the folder is called AGS in local

Here is the thread I was talking about last week. Just an idea to see how Amazon Addressed that issue. Amusing how the thread went missing, they unlisted it! Luckily a game news company on google had the link posted so I found it!

Not saying everyone is a cheater, but the error code 50 applied to everyone in that thread and they got banned.

So it appears that support have completely ignored anything most of us have been saying. I have tried logging into my account on 3 computers now, and all of the results are the same. Kicked to the Main menu. This cannot be a software issue and has to be something to do with their server/system blocking these particular accounts from the game. It is obvious support don’t really know what is happening, and are just being passed basic info from the dev/tech team. We would ALL appreciate an update…

Seems like most “banned” people have touched the boars one way or another. Daddy Bezos swang dat hammer and got rid of the cheaters!

like i said, it is not related with your issue. neither it is a ban. my account is working fine.

The boars were a honeypot. We got got… Unfortunate for all of us who played 200+ hours and for 1% of that time did a bit of cheesing. GG Amazon GG…

I have to go to work. I am going to leave this here. I really hope Amazon and the Devs give us some closure because from what I am seeing there is no way we will get unbanned or any help. Thank you all for struggling through this with me. Life has been a mess recently and this game was my Solace. I hope we all get closure or resoution please.

So i also have this error message now. Also “Reason 50” logged in log files. But what the hell i just got banned for?

I did not even abused their broken mob spawn system. Also did not cheated or anything and was always nice in chat. So why tf would they ban random people? Thats the thanks for waiting 4 hours more than planned for a patch, thanks AGS

Same here. Even didn’t know about the boars bug.
First long queues, than long patching, than this block message.
Love the gameplay, but everything else in this game is not smooth.

I’m getting this issue as well, uninstalled, reinstalled, verified, also tried reinstalling EasyAC. I can’t think of anything that I had open or did that could warrant this. I was split screening watching Netflix and looking up resource maps, I was also in boar area for a bit when I had to do the quest chain around there, but I’ve been playing non-stop since release, I may have been in an exploited area without knowing as well. I was literally 2 levels away from 60 and about to get into endgame content, we better not get customer serviced into limbo.