It gets a bit tiring and hypocritical that people whine about others writing in another language than english all the time, their claim “it is disrespectful” but by demanding people only speak english they disrespect all the other people that are not english speaking natively.

Furthermore many are more comfortable writing their own language, which shouldn’t be a problem when the intended people (on my server hungarian/danish are the big languange crowds) understand it just fine.

IF someone speaks in a language you don’t understand, safe to say the message wasn’t for you, so just ignore it and move on, no reason disrespecting these people by demanding they change language (apparently people are afraid they miss out on everything)

Another thing is people keep reporting each other when we discuss the topic which is ridiculous… People should just let everyone write in the language they prefer, it’s not like there is a server for each of the 100+ languages in europe, and being offended about another language… well that is very “modern american” I guess. People need to get over themselves and respect that others out there have other languages, other norms, other cultures and just accept not everyone is like them… and then maybe chill a bit (read: A LOT) on the “getting offended” about everything and nothing constantly and reporting people left and right…

I’m from EU, English is not my mother tongue, but I too would get pissed if people started having full conversations in a foreign language on global chat. That’s disrespectful towards the rest of the server that cannot understand what’s being said. Maybe you’re making fun of them or it’s something they’d be able to help with, how should they know? Either way stop being egocentric and use English in global chat.

congrats on being confident in your english, many aren’t… so it’s okay to disrespect them?

who care’s if “people make fun of you” if you don’t understand it… then it doesn’t matter… just like all those chatting on discord… they could be laughing at you too, would you ban use of discord and other chat services then to prevent that? and remove private messages as well so people can’t laught at you in tells?

If it’s a short inquiry I don’t think anyone will mind. But if you want to have full length conversations in global chat in a foreign language then stop right there and use DMs.

How do you think you would react if ppl spammed global chat in wingdings script or morse code? I’m sure it would just look like spam and annoy you just the same.

Also, you’ll never improve your English if you never use it. Just saying.

why would it be disrespectfull if you report anything but english on GLOBAL chat ? i personally hate when ppl spam their language on global chat . if you want you can use your language in direct messages or party chat but while game played by atleast 1500-2000 you need to be respectfull while you are minority . and its 2021 how can you still not know basic english for a simple game ? or even you can use google translator .

native english speaking is the minotiry… I think german, french and spanish would win in Europe unless we count the part of russia that is part of europe too, then russian should be the primary language…

it’s not disrespectful for you to not understand a language, but it IS disrespectful to force people into a language they are not fully comfortable with (I write it fine as you might have noticed but not all does) and since Europe is multilingual and heck Britain which is the only english speaking country isn’t even part of the union anymore… so why english? might as well be german then… your claim would hold more in USA but then again like half of them are spanish speaking, and in Canada like half is french speaking primarely… just accept that other languages exist and you don’t need to put your nose in every message in global or faction chat

and google translator? really? oh sorry grp I need to copy what you said into translator, then I need to type my reply, then copy the reply so you can then translate it again… instead of them just speaking their own language… have you noticed the VOICE chats also use different languages? and guess what… NOONE DIED FROM IT…

There are more than a dozen languages in the EU and everyone has the right to be in the chat, not just English.
Some languages, such as French and Spanish, are no less common than English.
If we are talking about the absolute majority of language users, then everyone should switch to Chinese - there are much more of them than representatives of any other language group.

If you do not understand something said in a foreign language, then in 99% of cases it was not written for you, but if it annoys you… Well, that’s just your problem.

they have their own language on their servers . i didnt see any french spamming on my server or german cuz they play on their own server but those russians, balkans consistently spam . nothing special they act like they always do . what kind of thing is “dont need to put your nose in every message in global chat” whats the logic behind this sentence ? its not disrespecting . while game has rule of this YOU AND UR MINDSET must follow it . also do you know why english ? cuz its most common language on earth . and also another stupid claim" noone died from it " roflmao so if nobody dies that means its legal for ur mindset ? ok burglars are good ppl then ROFLMAO

while this game has no chinese servers " 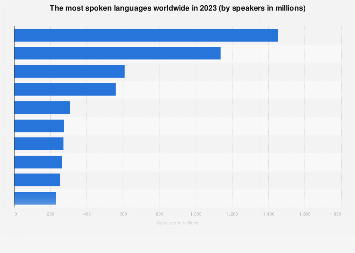 Most spoken languages in the world | Statista

How many people speak English? This statistic shows the most spoken languages in the world. There were around 1.3 billion native Chinese speakers a the time of survey.

The point is how many people can understand a language and not how many use it as a primary language. And by far English exceeds Chinese or any other language in that regard.

not seen anyone spamming…

I have seen people talking in their own languages, but that ain’t spam…

1.3 billion native chinese speakers… but apparently 200million of them don’t speak chinese when we get to the graphs…

If we go by Europe (and yes Russia is considered part of Europe) - Source: European Countries by Population (2021) - Worldometer

while ppl cant know what you talking about you call their mind are “feeble”
good bias lol . if you want to keep chitchatting in your language u can dm your buddy . that way u wont be called troll or you can be “not feeble mind” that way LOL

Ah again with your native speakers bullshit : ) I see logic is lost on you.

Mandarin is a DIALECT of chinese

Why does everybody forget about Ireland

Aside from that, I thought the Designations (DE/EN) (ESP/EN) etc. were there to tell the people, which languages are spoken on that server. If someone spamming the Global Chat in Cyrillic although the server is designated as another language, it really can get annoying.

because them speak Irish too? unless they forgot them roots of theirs?

dude u really put POPULATION graph to that topic roflmao im really rolling over here hahaha . from language to “eu population by countries”