My friend was banned after being mass reported by a green company in our server.
Screenshot of the player admitting to it: 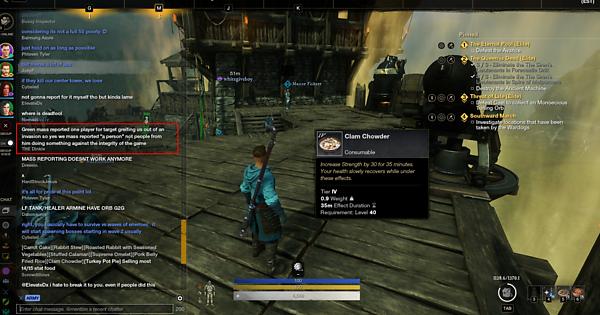 He was mass reported after removing their company from the invasion because they are known griefers. These players are lower-level players who tend to join invasions just to stand in front of the siege engine part generator and hold onto the repair parts so that other players cannot use them so that territories are guaranteed to downgrade. Moderation has denied his appeal even with presented evidence and will no longer reply to his appeal. No CoC were violated, no harsh language was exchanged nor was he abusing his powers. The players were removed to preserve the gaming experience of the 50 other players who chose to participate in said invasion.
Character Name: SAVVYT
Server/World: Carabas
I am posting this on his behalf as he cannot post here on the forums as he is banned from posting as well.

Amazon has to do something, people are getting banned and companies losing wars over fake mass reports, please put humans to check these reports

This is affecting the game for entire companies as legitimate top players get mass reported before wars. Amazon bans permanently based on user reports without review how is that possible

two perm bans in less then two weeks for the same account. Amazon fix this.

my brother had the same happen to him and its been 2+ days with amazon only telling him today that he was banned for “botting.” this game is killing itself with poor customer service. Literally anyone you talk to “cant do anything.” what can you do amazon. also they tried to say there was no auto banning bots but then one dev said that there was that exact thing. sad to see this game imploding. Please ANY DEV!!! please get working on un banning people who get mass reported and ban those who mass report.

A sad reality that this game will die due to dumb stuff like this.

100% and its really sad to see. MMO’s been going downhill. this one gave me hope for the genre only to be pretty much spit on by non communicating devs after they mess up and ban people.

I guess this game will just come down to whoever is able to get the other faction banned first.

Hello @boaticus41
Tell your friend he can always appeal the decision but I ensure you the bans are not automated, if there was an error we will surely correct this.
https://www.amazongames.com/en-us/support/new-world/articles/appeal-a-ban

Just please remember the forums are not the place to discuss penalties.