FINAL UPDATE. I discovered what is causing this bug. It’s significantly more fundemental then just being a issue with sweep. See the new thread MASSIVE bug with Grit

I added a 13minute video showing a few fights against a tank in 300 con. There’s plenty of instances where this guy ignores the knockdown of my sweep. What most of them have in common is that sometimes he’s blocking with his weapon when he ignores the sweep. Further testing is needed. Shoutout to anyone that can count the amount of times sweep bugs. The new video will be at the top.

There is a bug with the spear skill Sweep.

Periodically when you sweep another player they will sometimes not be knocked down.

I have no idea why this happens, but I DO know that every player I fight that has 300 str is able to consistently roll out of every single sweep that I perform, rendering my build useless against them unless they really screw up.

In the video below I’ve shown 5 clips of this bug taking place. 4 of the clips are with somebody who is 300 str while 1 clip is with a full dex user.

I’ve experienced this bug hundreds of time and I can stay for absolute certainty that the 300 str perk allows players with said perk to not be knocked down from sweep, while at the same time sweep will sometimes just not knock people down, but that happens less then 1% of the time.

I want to reiterate, people without 300 str VERY RARELY don’t get knocked down by sweep. Every single 300 str player I’ve fought that I use sweep on almost always ignores the knockdown from sweep.

Please fix this bug. I don’t know what else to say about it. Thank you. 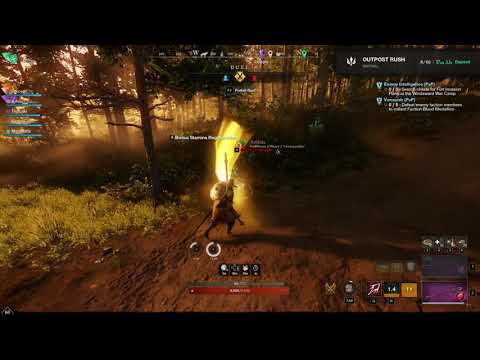 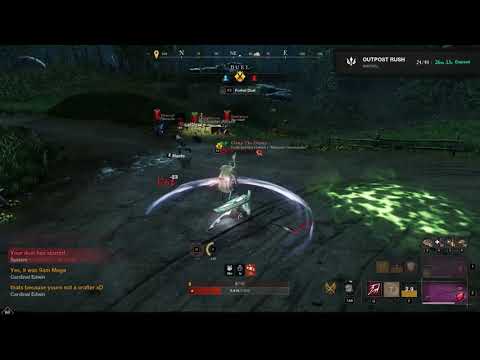 You are lagging. The vault kick doesn’t have a long enough stun on it. If they spam dodge. They will iframe the sweep.

The sweep is being iframed by the dodge.

It’s not a bug mate. Sorry.

If they’re taking damage, they are not i-framing it.

I didn’t see the others to notice that they do have dmg numbers after the first.

Others have posted about this, and I actually collected footage as well. I did numerous tests.

I am not sure this has to do with active Grit specifically, because when you stun someone with vault kick (or any stun), Grit is cancelled. Grit is only active during ability animations (for 300 str, light/heavy attacks as well).

Vault kick cancels all of their animations, and therefore cancels their grit.

Perhaps the bug has to do with 300 str applying grit status when it shouldn’t? Or perhaps the last update caused massive server lag. Either way, this is game breaking for Spear. Vault kick into sweep is the only reliable way to ever land a sweep on 300 str/heavy players, since they have grit on literally everything except maybe 2 abilities.

I tested last night with a 300 str friend, he was able to do this dodge roll out of sweep (while stunned) despite the damage striking, regardless if he had grit upon the time of Vault Kick landing (and stunning them/cancelling grit).

I did test with 1 other Dex user friend, and he couldn’t get out of it, so this leads me to believe the 300 str grit perk is applying grit when it should NOT be.

I will upload my clips of testing as well, but it doesn’t have to do with them having grit active at all, as you cannot have grit while stunned.

AGS, this needs to be fixed urgently, as this completely destroys Spear in pvp.

Dude I seriously appreciate the testing that you did. if you want you can post the links here and I’ll edit them into the main post. I would love for more visual data representing this bug.

Your theory on the 300 str perk applying grit when it’s not supposed makes total sense to me. I can see that being the root cause of this bug.

Question for you though, I’ve seen players in medium/heavy with 300 str get a cc break roll (which is the light armor roll) to instantly get out of my sweep when it connects as well as from a kick into sweep, or a bash into sweep and I’m wondering if you’ve ever experienced this yourself?

I didn’t see the others to notice that they do have dmg numbers after the first.

i had some duells in OPR yesterday and it occured to me more than once.
I sweeped and player wasnt affected.

Spear is more difficult than some other weapons, you have to aim and land your skills as you dont have any AoE effects.
Please fix this or tell us why its not affecting some players.

The lag in OPR is very oppressive compared to lag in duels outside cities and makes most any combo based setups impossible because of how crappy the OPR servers are.

It’s the same issue for riposte, OP. You can catch people correctly with riposte but they will just dodge the incoming stun animation. I tested 5-6 times without a stun → wep swap → sweep and only did the sweep, worked 100% of the time. The wep swap functionality is far too flunky to catch decent players with combos like this ):

true, some games i sniper people allover the map and the other game the first 5 minutes not one shot connects.

Didnt saw the video but YES that happen all the time, most of when you hit it on the higher limit of the range. (Not iframe)

Yea you know what I mean then. OPR is fucking horrible for lag. I’ve had wars with less lag then OPR.

I believe it has to do with server lag. A dude Reposted me just before the server restart in OPR. I didn’t get stunned, I was wondering why because I’m running full dex. I think server fails to register that.

Dude I seriously appreciate the testing that you did. if you want you can post the links here and I’ll edit them into the main post. I would love for more visual data representing this bug.

Your theory on the 300 str perk applying grit when it’s not supposed makes total sense to me. I can see that being the root cause of this bug.

Question for you though, I’ve seen players in medium/heavy with 300 str get a cc break roll (which is the light armor roll) to instantly get out of my sweep when it connects as well as from a kick into sweep, or a bash into sweep and I’m wondering if you’ve ever experienced this yourself?

Now that you mention it…I did test with one Dex friend as I mentioned, and he was not able to replicate this dodge roll out of my Vault → Sweep. However, I just recalled that one time he vault kicked me and swept, and I was able to dodge roll out of it.

You just sparked my brain to recall that happening before, so perhaps it’s not the 300 str after all. I’ll have to do more testing today to be sure.

My other theory is that since they have made all sorts of changes to the servers hand-shake process to combat Duping exploits, perhaps the handshake is being processed in a way that the server is registering the damage from sweep BEFORE the knockdown, and therefore if they’re mashing dodge key, the damage breaks the Vault kick stun, giving them a narrow window to dodge before the knockdown occurs.

However, this doesn’t explain why heavy armor gets a light dodge roll distance in this scenario.

Oh, I also believe it might be server communication (damage happens before knockdown) even more now, because I am able to land Sweep just fine (they can’t dodge out of it) if I don’t Vault Kick them first. For example, if a Warhammer user casts Shockwave, I can dodge the shockwave → Sweep while he’s stuck in the last bit of the animation, just as his Grit finishes. I’ve never had anyone dodge out of direct sweeps, but this could be coincidence (cause they’re not stunned, panic smashing dodge key?).

Although I’m not sure what the cause is, I am certain if this isn’t fixed ASAP it will destroy Spear viability in PvP more and more, as more players realize how easy it is to be immune to to our most crucial ability (good luck trading blows directly with GA/Hammer heavy armor).

The only part of this I know for SURE happens 100% of the time is Vault Kick → Sweep results in a dodge roll, every. single. time. Tested it 100 times with my heavy armor friend, I couldn’t sweep him out of Vault kick a single time due to this. It’s infuriating and completely changes the dynamic of these fights. We’re supposed to trade blows with a tanky beefcake class that is virtually immune to all of our CC now.

For all the suffering spear homies out there, I posted another bug thread regarding various other bugs: [BUG] Couple Spear perks not working as intended?

The video is a little longer than I wanted it to be, and they’re not nearly as game breaking, but something to keep an eye out for. I love Spear, if everything worked properly I’d love it 10x more though

For me is hierarchy implementation, the server drop the stun and other skills if needed to conserve the stability, spear is far below. And by now everyone should know this game have a weapon hierarchy and who is in the top with every single thing working properly.

Yup I was going to post this this one too but you did it for me and have a video so thanks. Sweep keeps missing after 1.1

Also vault kick stuns and sweep knockdown are able to be dodge out of almost instantly. I can sweep someone and they fall down yet can dodge out of an immediate follow up melee attack. the durations are not lasting nearly as long as they should and this one has really been Since the patch.