Mega companies are destroying the game

Everyone knows this… but what can be done

did you seriously bother to actually read the whole thing and even look at the pic i posted? jesus, at least read the post before jumping to make a comment that is completely off topic. a mega company is NOT just a company with good players. its a company using 1 member to create a shell company to control a territory, using the same 50 geared to the teeth, the same 50 decent pvpers to great pvpers in EVERY war in every territory, using multiple shells to keep it so they can fight 5 wars a night. its killed 3 servers that ive been on and tried to kill a 4th. its idiotic to defend mega companies because they are ruining the game we paid for so they can sell gold and just get a kick out of driving people off the servers. im not saying they are the only reason the games dying but its certainly helping to cut the heart out of the game.

well i cant speak for everyone, but as ww and ef owners we literally have never tried to fight people pushing influence because we just want the war.
Building experience takes time yes, but the “mega company server killers” did this as well from day one, practice pays off sadly.

its pretty sad to have seen but last time we tried pushing everfall, about 10 people show up the second 1 person touched the fort then stayed there for over 12 hours. while other squads started holding every single pvp quest zones.

its kinda amazing to see that sort of dedication and resources but my god i feel bad for them to waste their entire day for a few people pushing.

finally we are getting some moral back and purple is pushing again and wars are coming back online.

it doesnt change the shear amount of work to deal with mega companies or mega alliances not that its not impossible.

100%. Babies on Camelot are ruining the game for everyone else because of fragile egos. Sucks. Max taxes just to be dicks. I wish AGS would change this system.

I’m not arguing because i enjoy killing servers, we used to give out zones and stuff for server health, i just think its fair that in a sandbox people do what they want, though numbers advantage is unlucky and sucks, if you cant even declare war in the first place then thats another issue. Cant you transfer to a server where its more equal? i dont think ags can really do much about people just joining whatever faction

i personally have zero issues with my server. i play to have fun and im having fun.

but i have empathy towards those that are stuck in shitty situations by people that think its ok to wreck everything and leave servers like farting in an elevator.

15 bucks is 15 bucks and not many are going to pay just for a game.

more likely once people get fed up they will quit. and you can really be happy you killed a server (not you specifically but mega corps that do this shit)

Problem right now is that people are running multiple accounts to fight wars on different servers. This is made possible by the ability of players to transfer at will, which means a company can own WW/EF/BW on multiple servers.

Only real solution is to redesign the tax system. Cap taxes, limit shell companies. Been saying it for months now. For now, a player revolt to spread out and deny taxes to these mega companies needs to happen. Already happening on Camelot since they jacked the taxes to maximum.

A place where people who met end game can congregate and go against others of the same stature. It would easily turn into the, “Final PvP challenge,” after you’ve dommed a server for months.

The top company on my old server went to another server that was renowned as a skilled PvP server. Not exactly sure what happened but they didn’t Dom it as far as I’ve been told.

Went from stomping kids to an equal playground that was more competitive.

Valhalla got merged right? Make another server called Valhalla and only allow 625 geared players to transfer to it.

Open territories would definitely make greedy people transfer faster to get the jump on others.

Announce opening day and when transfers will be allowed, a week later, boom. All these mega companies leave for a highly competitive PvP oriented server.

You could even give out special titles. Like a different fancier font for, “Windsward Owner.” On these special servers.

It could even turn into some kind of high skilled PvP setting for streaming or even just content in general.

i agree. i also think there should be an option to overthrow ruling companies and lock em out for a while without having to do wars. why? because all they need to do is to show up for war and defend it and earn ridiculous amounts of money from the taxes of hardworking pve players. doesnt really sound fair, does it?

ive been an advocate of the no taxes for the company rule. make it so when you own a territory the taxes can ONLY be used to improve the town or at least only allow companies a small percentage of the taxes. company only gets 5% of the total tax money for company use and for every 100k in taxes over the first 100k that a town makes you lose 1%, so any territory that makes more than 500k only gets 1% of the tax money. that makes even mega companies actually have to work for their gear.

The time for AGS to fix this and the tax situation was four months ago. It’s too late now. They already lost a ton of players over it and they will continue to. As servers die out the mega corp will move to the next one and then more people will quit. There aren’t many servers left now. 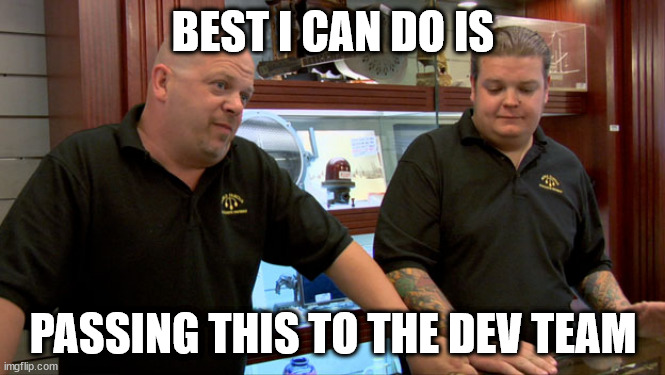 PVP Expert? Jeez bud, you seem like an AGS Expert to me!!

But seriously. I’ll pass this along to the team.