We are creating a thread to track feedback from the Brimstone Sands PTR.

You can find our upcoming PTR Bug Reporting Thread here.

As a reminder, we are solely looking for feedback for the upcoming PTR, not the Live game. Your help in keeping feedback unrelated to the Brimstone Sands PTR out of this Megathread is much appreciated!

Brimstone Under Siege
Getting completion credit for killing legion waves is hard to get with overpopulation
Work Around: seems to be enabled next update

Preemptive Strike
Polish with using a lit torch animation to burn war supplies / crates
This can be used throughout the game on quite a few quests
extra: reduce the interaction time

Stirring in the Sands
Put quest marker at door entrance, also had to walk up stairs twice to trigger script box to proceed to next part Talk to Aban
Mob Respawns on Qareen and Ghul too long quest was 95% waiting

Audience with the Pontifex
Sacred Scroll of Awakening needs an questmarker Coming Forth by Day
Confusing quest information,
also it says from Lost but the only mobs dropping it are Cursed Ghul

Necropolis of Sutekh
Solo Arena does not reset instance, can only do it once

Persons of Interest:
Faction Quest
After completing it once, can’t use Azoth Staff to summon spirits Shows in game however Putrid Egg Clutch
Seems like it has no purpose, does nothing when killed, has no drop table nothing? The War CD should be extended to 7 days and people should even then not participate in wars at all. That’s what a cooldown actually means.

My reasoning is that there are no other reasons than shell companies for people to change companies more than once in 7 days. There should be a certain persistence to that as it is for Faction Change.

And, not even in Defensive Wars should one be allowed to participate. More people should get access to wars and shell companies need to get tackled hard if the Territory Ownership System doesn’t see any change in Brimstone Update.

I haven’t checked yet, but I hope that the attacking/ defending company also has a forced amount of places it has to fill with own company members, which else stay empty. Also, there should be a CD for people that allow taking part in wars of the new joined company (maybe 3-5 Days only) to completely get rid of Shell Companies. This way there will be at least a bit of fairness to world territory pvp.

2 Likes
How Shell Companies are damaging the Game: An example from my server and why PTR changes not enough
Pyrys September 16, 2022, 12:14am #9

just had a 5v5 arena match 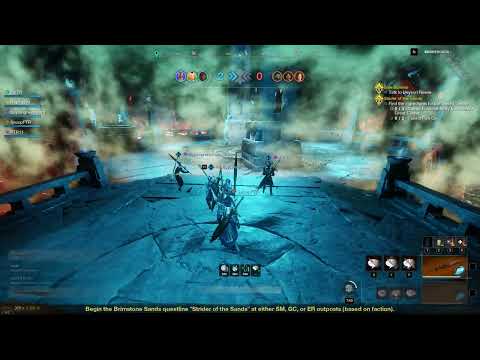 I think it would be very helpful for the first week or two to increase the spawn frequency along the main story quest. Waiting for bosses or legions to spawn with a whole horde of players there trying to get credit just felt frustrating and unnecessary, and when it goes live a lot of people are going to swarm the zone, just like they are on PTR.

Is this a bug or something thats coming?

Having all Halloween event patterns force keen is kinda sad tbh. I love the skin for the Life Staff but who in the New World runs a keen LS?
Plz devs change this.

I am totally with. I couldn’t see the current number in the dev video but I think 35 for a defence company is still low.

My personal opinion would say 45… This sounds harsh but if you constantly need more than one additional group for wars, then you should reconsider how your guild is structured.

Additional to that. This should go for attacking wars as well. There is no need to be able to snatch someine else’s territory just by using mercenaries from other companies.

As long as a loophole for tiny exploitation of the system exists, people gonna use that.

It sounds a bit anti fun to force thst on players but that should lead to guilds structure themselves into one company, because there is no use in having multiple.

What do you think about adding an additional CD to War Participation like max 3 wars during one week similiarly, how it was with orbs CD once.

I think such a war participation CD introduction may make things more spicy with companies having to use their members more strategically. For this I also would be against a 45 ppl needed from the own companies and wasn’t max war ppl reduced to 40 at some point btw?

But yeah, wars have to not be closed off for just a small percentage of the player base.

1 Like
How Shell Companies are damaging the Game: An example from my server and why PTR changes not enough
Iolara September 16, 2022, 6:47am #16

i dont think an additioanl CD is needed if you are forced to attack with your guild. And i wouldnt get rid of helping other companies as a whole.

If somebody only can participate in 3 wars then even if every member is one company , your wont be able to hold like two territories, which in my opinion should be the max possible.

While the Questsystem to get into Brimstone is a great addition. Having them, depending on your faction, in different locations is givig the marauder faction an significantz advantage to buy brimstone on release.

the Marauder quests in Ebenscale are by far the closest to the Fort.

The Quest is the Same, so it would be fair that every faction starts in the same territory.

Maybe extend it to 5 wars. Just an idea, but I think that a weekly war participation CD is needed nonetheless.

A company should strategically allocate its members for wars instead it being able to always place their best roster. A bit like a game of chess instead of the unrealistic case having always your best horses available.

Great Sword seems to be over-tuned. Wearing light armor with full onyx, one ability has hit for 3/4 of health. I know light armor is supposed to be glass cannon but the Great Axe never hit that hard with a single ability. I think with the way GS is able to stick to someone it should at least have the damage turned down a little bit to compensate this. At the moment it feels that someone whos not using a great sword needs to be significantly better than an opponent that is using one just to beat them. Now times that by X based on the amount you are facing. It really isn’t fun as someone who uses light armor and always has been even against Great Axe in its hay day.

I don’t see anything in the patch notes and it only happened a single time. So I assume it was just a weird bug. But it’s weird it did not just put it 1 more person into one team but 2 extra per team.

Too much materia for runes.

The game is mostly PVP for the end game, so are the rune, yet you ask for an insane amount of materia that we need to grind in dungeons, please reduce that. OR make it possible to do PVP instead, or raise the number of arenas / wars / OPRs to craft said rune.

The amount of materia is more than 50 m10s per dungeon … come on.

The heartgems also drop from the end boss of the relevant dungeon. I suppose it depends on the drop rate though

common why not give us lodestones so we can try epic and legendery versions of the heart gems???

also your spawn timer for quest bosses is an epic failure like launch 100-1000 ppl waiting for one boss will kill your server/region :S