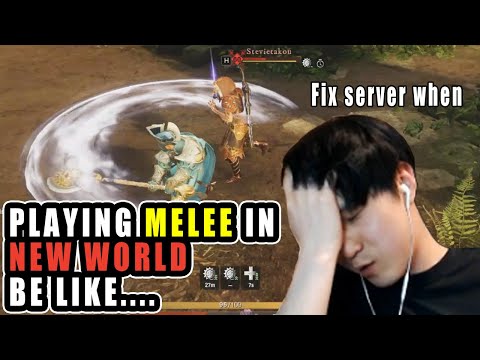 its nothing new actually… i saw this video like many people i guess but after 4 months playing the game and as the hype is less and less… this really starting to be a major problem especially in pvp. any dev can tell as what they plan to do with this ?

Lol. Wanna know how I get my opr points now? Farming brutes- that’s all I do every opr now loll.

Melee si shit now, the only way for it to work is in larger groups so some of the bugged attack animations can hit something around the teleports and the stupid jump spaming that now is a free Dodge That costs no stanina, sincerely i loved the Game, i was so hyped and in love with it, but now i barely find the desire to keep playing and if i get on is just to play a few OR to get dissapointed again and justo log off

Had a lot of the issues myself from the video posted above. It’s frustrating for sure. I started a new character on a server closer to me to play with the lowest ping I can. Hoping that helps. Playing on a cross-country server as melee in New World is a no go currently.

i thought only high pinger like me had these problem. wow this game fked

That is definatelly the case and i hope you can play the game better now. Unfortunately for me im already playing in a server close to me so lets hope that something will change.

Why does this thread only look at “melee” ?

The very same or similar arguments are true in one way or the other for all the other weapons.

Which means on one hand the combat right now is fair, because everyone has to work around same or similar shortcomings of the game.

On the other hand, that there is need to improve combat in general, not just melee.

every pvp combat experience is generally bad with any weapon combo when you’re on ags’s servers.

yeah it’s the servers nothing to do with melee. Yeah it sucks for melee cause you can’t glue to people but try dealing with this when you’re in light armor as ranged bugging out and dying in 1.5s. And trying to range people rubberbanding everywhere, getting them to 1hp then they lag out and are 100% hp

I personally play a lot with the mage weapons and sniping is not really one of my strengt ;-).

But Fireballs which simply fly through opponents without connecting are.
Promised dmg increases of 20% when wearing light armor, but getting effectively just 5%, because the 20% are calculated against base dmg, are.
Where animations prior to triggering an ability take ages.

And there are a lot of other examples, where I as a mage feel very much at disadvantage. Not because of skill, but because the combat system does not work fluid and as expected.

I bet musketeers have their own problems too.

i cant have an opinion about this cause iv never played any type of ranged weapon in this game as i use every weapon that scales with strength. A similar video by a ranged user would be very enlightening.

That video summarizes melee gameplay.
My biggest issue with AGS is how they look at balancing weapons, they just nerf or break weapons.
GA was a fun weapon b.c it was the only weapon that gave you a chance vs range players, what did AGS do with the feedback they broke a weapon without looking into why people don’t wanna use other melee weapons.
I just switched to Void/Icy gauntlet, the void blade actually feels good I don’t get how the lounge can work okay for one melee attack but be dogshit for the reset.
And the worst is if they decide to look into buffing melee weapons, they will just overturn them making ‘OP’ and the forums will be back on crying how melee builds are too strong, and of course, after feedback from ‘community’ they will nerf melee weapons make range strong and in a process break stuff again… and repeat the circle.

The struggle is real. If this isn’t number 1 on their list to fix then they aren’t putting their resources in the right place.

There is nothing worse than playing a game that feels like it is actively taunting you.

I would argue that it is more evident for melee that has short range attacks. Hatchet from my experience is brutal. It feels like you have to be on top of the person or the hit boxes are one pixel.

i made this post to make more people pay attention to this. Of course im not the first one there are others before me and of course the video creator. I know devs have a lot on their plate now but lets hope they will manage to see this and give a solution cause is really really frustrating,

i’d agree with you if hatchet didn’t stagger after every single swing, also hatchet has longer range than rapier

This is why I replaced sweep with skewer, trying to consistently land sweep with AGS hitreg + everyone having grit was driving me insane.

How is this a major problem when there are more melee players in pvp than ranged as evidenced by many streamers today and what they depict? Also in this video, there is a clear lack of skill. I mean come on, most of you have to see this guy wasn’t even trying in some cases. He even had a great axe on his back with his cooldown free to root enemies and didn’t try to root them to close the gap. Its like screaming Hatchet is broke!!! Fix it!!! but in truth there are ways to complement hatchet.

I absolutely think hatchet cannot close the gap for sure to the same extent as other melee even considering berserk. But when you compliment that with another weapon and use those skills accordingly you can lock down players and stay on them. I for one really enjoy melee at the moment. Just moved into a hatchet/spear build where depending on enemy comp I might swap hatchet for sword/shield. I lead boards in either case with player kills. I may not win in total damage, but total damage is really for the AoE players be it war or OPR.

I would like to see consistency with hit boxes though. That for sure is annoying. Really that’s the only complaint from the video I can agree with. But note, a training dummy hitbox issue is not equivalent to a player hit box. The meshes are different… This is just a way to mislead people to believe one side of the story. I haven’t had any issues with player hit boxes and ive been playing since alpha. Its mostly NPCs, specifically bosses, that you kill in the world where you have a hard time hitting them while standing as close as the games physics will allow and you still cant hit them. Regardless the length of the weapon haha.

it summarizes desync and lag