I argue that way because I know the bow and musket are strong.

Strong? OP? I think you are from an alternative universe because ranged weapons hit like wet noodles in this game. Apparently there are some who even believe that ranged weapons are support weapons not killing weapons. I would fight to death to make sure my muskets don’t end up as a mere tool from pulling aggro of NPC enemies from afar.

If AGS was to buff them, they would be incredibly OP in correct hands, and I don’t want that.

Every weapon is OP in correct hands. But Muskets don’t even perform the bare minimum in correct hands. If you don’t want buffing muskets then go play your favorite weapon elsewhere. This is a topic for players who main muskets. You do not belong here.

If the devs are not gonna address the muskets, I am simply quitting. Many other gun enthusiasts are gonna quit too. You medieval guys have fun playing a typical sword and magic reskinned ESO clone MMORPG for the rest of your lives. Have fun on your own. I also want refund from Amazon. I endured so many hours of boring grind and frustrating lvling quest chain to reach lvl 60. I bought this game solely for muskets and gunpowder weaponry. The only reason I put up with bugs, exploits, shit story, shit travel system, shit faction system pretty much shit everything was to play as a musket player in this MMO. Without muskets, this game isn’t even worth 40 dollars. Might as well go play Black Deserts or Final Fantasy Online instead. They are far superior.

The only reason I put up with bugs, exploits, shit story, shit travel system, shit faction system pretty much shit everything was to play as a musket player in this MMO.

Wait-… There’s story in the game? Was too busy shooting my musket to notice! Been using musket since level 2, and I am now 60 with around 3000 players killed (outpost rush spamming) and I strongly agree that the musket is underwhelming, it really needs a buff to the base damage output or simply armor penetration or something of the sort.

Killing healers, and heavy armor users especially is an utter pain, my GS 593 musket feels like it’s shooting mosquitos at the enemy the majority of the time.

… That being said, I’d not change it in for any other weapon. 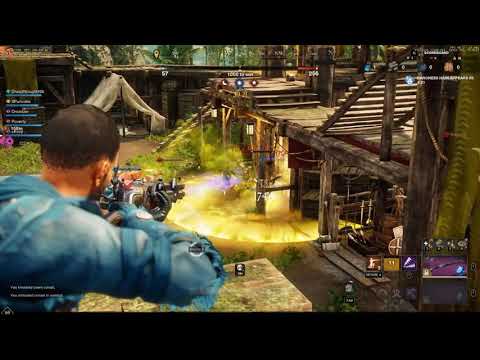 My favorite part of musket is the headache! Check image.

[Ranged][Effects] Try to aim with this... [Photo included] General Discussion

For example this buff effect is just spinning around the player. Almost impossible to aim or causes headache. Please clear visibility, when aiming with ranged weapons. [image] Also when iam standing close to wall, camera is zooming on my own character’s head, impossible to aim.

Let’s look at this. You basically need a whole other weapon to survive as a Musketeer. Think about the amount of work you must put in to kill one person. Now compare that to a person with a axe, hammer, bow, fire staff and so on. They only need 1 weapon to dominate yet you need two with the majority of the skills in rapier being used. You’re really good at PvP but the majority of people who play the musket will never be this good. Like I said before this is two weapons and without that rapier this class is simply garbage.

What you do in this video can be done with bow, firestaff, and ice gauntlet most likely with better results.

Many play like that too but it looks like on that server his enemies are really bad and extremely under geared, granted it’s a good show nevertheless. On my server it is not that way because everyone is just meta and not a lot of 1 on 1 situations Remove meta and you get to do the above too.

Yeah. Shoot that server that he is on is definitely not how my server is haha. Good video. Man if we had the old combat system and old trapper skill tree this guy would be even better but again his enemies are braindead and over extend, use their skills incorrectly and go against him and brute. Most are almost always alone.

The Musket needs those QoL adjustments asap:
-better crosshair
-overload should instantly ready the musket just like piercing and poison arrows does
-remove the exhaust penalty or add it to every weapon
-fix the shorter dodge distance with musket
-fix not being able to hit targets in your face
-each shot of Shooter stance and each trap of double trap should recharge invidually one after another, thus I don’t have to wait the full cooldown when I have to roll out of shooter stance.
-sticky bomb aim that does not mess with your camera
-sticky bomb goes off faster
-called shot gradually increasing damage over shorter timeframe

After this, we can see how it performs and adjust accordingly

Respect for that post and all info You provided.

Just one thing is wondering me…
Why all of You people comparing musket dmg to bow dmg in any way ? How hard it is to hit someone with musket ( and the distance) comparing to bow?
And in your opinion because your reload is slow You should do more dmg. And as argument You are using bow example which is a bad joke I guess.
When bow will get the same hitbox scan as musket then we can talk. I need to think where my enemy will be in next 1 second. You can just hit where he stands and make a dmg.

I don’t want more damage only armor pen.
Just hope the musket gets a similar level to combinate skills.

I never want to be musket overpowered at all.

In that case, bowusers could also use some more armor penetration

Bow/musket are so weak they are banned from wars lol

Nah Musket is doing less damage than a Bow, and that’s a normal state, Bow needs to have a better burst damage cause it is less performant in long range (and 4 sec charging shot is… long)

For Musket : Clearly a complete overhaul is needed
For Bow : Need to charge heavy shots faster (perhaps by a skill - instant charged shot).

For comparison the Fireball is doing nearly the same damage as a charged shot on Medium Armors but it’s an instant skill not affect by gravity.

I think they should change the way musket works. More damage at closer range instead of further away. To a point, nobody wants melee range with musket

That way hit scan is naturally countered the further away the target is. One of the main issues with the musket is if you buff it too much its OP at long range. This would help solve that issue.

Then they can buff base damage and we can all afford to put more points into constitution.

Maybe I’m wrong but the way musket is currently theres a very fine line between OP and useless. I think this would help.

There are other issues (like the crosshair and sticky bomb). But I think change just these ^^ two things would give developers and players more freedom.

So I switched my build and now I’m running 300 dexterity and 100 intelligence, my weapon deals 1500 per shot and sometimes 2800 on a light armored individual.

My vision of muskets: (Musket is counter to heavy melee) This would help balance the heavy melee meta, and give musket some PvE options.

Sharpshooter tree is the PvP tree/PvE Boss fight tree. Less mobility and a direct counter to heavy melee and siege. Base all skills (The more CON and Armor the enemy has the more damage is received) Light armor users would feel a bee sting and heavy melee would feel a Sledge Hammer.

How do I triple upvote this, thr musket is just the weakest weapon in new world right now, would be awesome to see it get some love

an issue with it, is that you can’t hit anything with it, if they are to close. I get we are ment to switch to a melee weapon. But if i want to shot with my musket, i should be able to. It just shows how poorly it’s designed.

I though of a potential ability. Hitting people with the butt of the musket (i’m not sure what the other end is called. And googletranslate is useless when trying to translate it). Maybe doing a knockback and jump back. Maybe it would just be useless/pointless

Heavy shot for bow needs to be changed also by just holding right mouse button vs having to left click and hold. Left clicking doesn’t always seem to hold for me.