Since the launch of game, healers in my opinion have been what this game is based on. Whoever has better healers or more healers normally win and dominate. If a healer is even moderately good, it is extremely hard to kill them and the ones that are good at healing, good luck killing them because it probably wont happen. Almost every other class in the game has extreme limitations. Without a healer, they most likely will not survive in scenarios they normally do with healers.

We need some kind of balance with healing overall. Plagued crits/strikes just don’t feel like they get the job done and abilities with plague don’t seem to work well because of how much people iframe. I barely see people land roots because of it. I feel in order to balance this game with pvp, everything needs to have a counter and there doesn’t seem to be a counter for lifestaff/rapier. It’s been the go to for healers for like 6 months. Almost every healer I see has a rapier. How do you kill them if you can’t catch them?

In order to solve this issue, healers need to become killable. I’m not suggesting to make it easy for other players to kill them, but to make it possible for other players to kill them. A good healer cannot be killed by anyone in a 1v1 scenario. I don’t care what kind of arguments people want to make, I 100% am saying they cannot be killed 1v1 if they are good with lifestaff and rapier.

So here are some of my suggestions to make it a little more balanced:

Every other player only gets healing pots, but healers get a healing potion and self casts with low cooldown time. I can’t think of the cooldown for health pots off hand, but a healer can self heal with lights or divine embrace at least 3-4 times before a health pot is up. You cannot kill them because they always have access to some kind of heal. They have way too much sustain and evasion with rapier.

Reduce healing to self:

Instead of putting potions on cooldowns, another option would be to reduce the amount of healing that healers do to themselves. This would make healers have to rely on other healers to help keep them alive. Having a 25% reduction in self heals I feel would be a good start, but healers in most games I’ve played are squishy and have to position themselves better. Right now I see healers right up almost on the clump but reducing the amount of heals to themselves might make them play further back.

Reduce the damage healers do to other players:

Healers already have the advantage of sustain, so why do they also have the ability to kill other players? A healers job should be healing, not killing. I’m not really understanding what the point is in letting healers be able to win almost any 1v1 or at least make it impossible to kill the healer.

The way I feel about healers is that they were given some kind of cheat to have an advantage over everyone else. Before anyone rushes to judgement, my first 3 months of this game I was healer main. I stopped playing healer because I didn’t feel like it was much of a challenge. I did feel like I was cheating and had an unfair advantage over people. Nobody could 1v1 me and I could just lay in my sacred and nothing could damage me.

I’ve decided to include some of my gameplay footage along with a video I found of someone else using void blade with their lifestaff. Feel free to post any ideas you have that could help balance healing.

My Gameplay:
(Using under 600 gs armor and haven’t played healer much in 6 months) 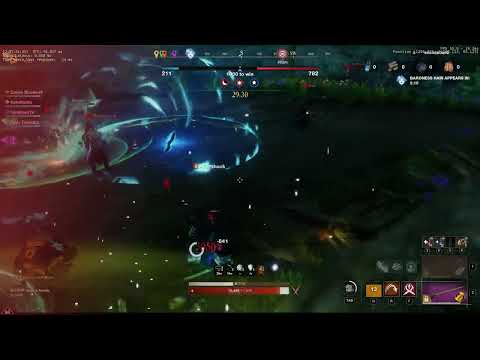 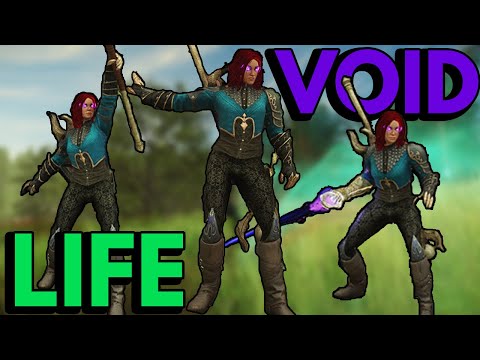 Some of my final thoughts: Make this game less about healing and more about pvp. Healing should be a plus, not what pvp is based on. In my opinion, this is what has ruined pvp the most.

As you mentioned, the life staff determines the outcome of most PvP situations. I don’t know if something like that can ever be properly balanced, so I think it probably needs to be reworked at this point. But, yes, they need to change/balance the life staff. If they want to balance it, they should just over nerf it, and then buff it up every week or 2, and finally fix the thing. Letting this go on for 9 months is kind of ridiculous.

Those changes would probably make game unplayable as healer.

Just nerf rapier and it should balance stuff out.

Just to clarify, I am not suggesting to nerf life staff with both of those first two ideas, but one or the other I think would help balance it without making it completely unplayable. I like to compare this game to league of legends because I do feel like some of the pvp is very similar, just in a different perspective. Healers in that game are very squishy and have to play back. They will die in 2 seconds if they are not positioned right or get no help against assassins. Why are healers able to walk around wherever they want without any consequences? Why are they able to just lay down in their sacred ground or tbag inside of it knowing you can’t do anything about it? It’s just not right.

Or, OR. They could nerf the escape potential of the rapier. That’s literally the crux of the issue.

Heavy armor had a similar problem, they took care of that. Now light/rapier can step out of 1, 2, or even 5 or more people CC and pressure. If incredibly skilled, indefinitely.

You could nerf healing by half or more, healing to self, and a well skilled rapier would still dance around in groups like this.

My suggestion would be to make another video just like this one, but no rapier and see how well you pull off fighting singles and groups like this. My guess, probably not nearly like this.

I’ll try other builds with lifestaff and post results but just so you know, the 2nd video is with void, not rapier and they still couldn’t kill him.

Watch the 2nd video at 5:18 and tell me it doesn’t feel like that guy has an unfair advantage over the other 3

And, not to dance on your parade or anything. I’ve noticed this survivability gap with the rapier.

I am a terrible player, and with the rapier i can dance around in OPR groups or skirmishes ungrouped and survive for a very long time.

I’m not personally nearly skilled enough to pull off what he’s going with the VG either, but that’s not surprising. There is however a huge gap in survivability between rapier and even VG then any other weapon combination.

There’s definitely a balance problem, but just turning down the heals more, instead of fixing the disparity between the weapons paired with LS would feel less appropriate to me. As this would only embolden these two specific builds even further.

in my personal opinion.

I definitely agree with what you’re saying with the rapier and VG, but I also feel lifestaff is still a little overpowered. I do think that putting healing potions on CD when you cast self heals would help balance lifestaff.

All your comments are fair, but you forgot something, devs don’t do game balance only on pvp side, whatever they do will affect pve as well. Either they go back to coding school and learn that pvp and pve have different needs or they will always stumble on the same problems over and over until everyone is tired and only bots will play this game.

Yeah I guess in the end it’s finding the sweet spot for both pve and pvp. I’m sure it’s a lot harder to do than having discussions in the forums. Devs have a hard job and hopefully they will figure it out eventually.

Unfortunately people will just find a workaround, using the mana pots to % of health perk is just one i thought of right offhand. So that would have to negate the use of mana pots as well.

Pretty much all of the other weapons paired with LS are more “balanced”. IE i can 1v1 someone all day with a hammer, sns, axe, ect, ect. But with a rapier i can take on several people and still heal everyone else.

A skilled VG player, like in that video can kill several people with ease.

That tells me though, that if healing takes another nosedive that playing LS with any of the other combinations will turn into a death sentence in 1v1. I just don’t want to see that happen, i’d like to see a balance struck as this is obviously an issue. I just don’t know what that is.

Healing has been nerfed so hard - repeatedly - that it’s frankly a wonder people still spec into the role.

It doesn’t need nerfing, synergistic weapons/abilities that lead to certain outcome in certain scenarios need to be carefully addressed.

A big problem, at least in OPR, is healers healing other healers, and no one dies. Nerfing the rapier won’t resolve this obvious problem.

Whoever has better healers or more healers normally win and dominate.

I honestly don’t know what’s the problem with that?

Firstly, in the 3v3 arena itself it is totally possible for a team with 3 dps to beat a team with healler.

In larger scale pvp like OPR and war, you really need to have haller, but what’s the problem with that?

It’s great that a DPS-only team isn’t viable, that needs to have class variety, if not, the problem becomes: The team with the most DPS or better DPS “normally win and dominate.”

The game is thankfully more than just dps class.

Let’s remember that the healer already has limited build options, as the heavy armor healer has basically become unfeasible.

If we nerf the healler even more, he will get into the same situation as Tanks, they will be completely expendable.

I understand the frustration of falling into an OPR team without a healer, but that’s why the class exists, to be impactful and relevant to the team.

Whoever has better healers or more healers normally win and dominate.

I honestly don’t know what’s the problem with that?

One weapon shouldn’t be the deciding outcome of a PvP encounter. The better player(s) should win. It would be silly if “whoever has the better musket wins.” No one would tolerate that.

But it’s already like that as it is. Even if you nerfed healers off the table. 3v3, 20v20, 50v50 is about composition. Not just skill. Even in a new world with no healers, you will have a team with more bows or mandatory Gwell on point, running medium vs light ect ect depending on the meta for weapon combinations.

Every time they make a change, the meta changes and then those become requirements to win. It’s more noticeable in OPR with mixed teams obviously. But you could remove the life staff and new problems would crop right up.

Go record yourself 1v1’ing a healer and post video for me please. I bet you money they tbag or lay down in their sacred then tell you to get better at the game.

People will die, and the gameplay will be a lot more fun.

No one would tolerate that.

I understand what you mean, but this is not just a healer issue.

What happens if you assemble a war team without:
GA?
IG?
GV?
Ranged weapons?

You will probably lose, because what makes a good team is its variety of weapons and functions.

We feel this “issue” the most with the LS as it is the only weapon option that provides healing in a viable way.