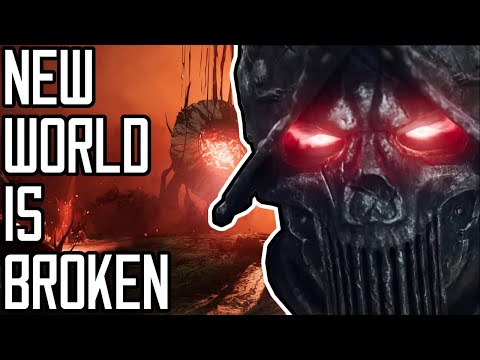 This man does a very good job of summarizing the problems with New World in a well spoken manner. This isn’t a video to trash talk but to bring up certain points to the community as well as the moderators who view.

I tried to check to see if video links were allowed - didn’t see anything that spoke against them - so I do hope that this is all right.

Im not gonna, let some dude, decide if i like the game or not, im fully enjoying it.

Remember its a new game… and hopefully getting better with time.

At least watch the video before you comment… He brings up very valid points.

To fix this DAoC forced you to go “Linkdead” or Disconnect after 3-4 seconds of holding that window.

Look up how repetition works in 3d games. Just because some can see that, doesn’t mean that it’s actually what is occurring.

He’s a YouTube person not a programmer. Simply grab 5 players and test it after you understand repetition. Stand apart. You will all see something different. This is why desync exists.

This isn’t about letting someone decide if you like the game or not. Many of us have played a lot (I have 223 hours into it) and no matter how much you may like something that doesn’t mean there aren’t issues with the core of the game.

True. He isn’t 100% accurate but these issues still exist and are baked into the game.

That’s a good idea. Could be something they implement if they don’t want to work the system from the ground up.

why do people watch this guys videos? lmao. josh hayes is such a bad content creator

I disagree but more power to you.

Hi everyone, There was a recent bug in New World that drove some speculation on how our simulation works. The bug was addressed quickly, but both the speculation and the bug deserve some clarity in explanation. New World is not client authoritative - from a simulation standpoint New World is entirely server based. At a high level the model is this: clients dispatch controller inputs to the server, and the server then checks that input for limits that might invalidate it, then if accepted uses …

He is actually very good at pointing things out and is doing a great job at covering the whole mmo scene
He said several times that he does not want the game to fail.
You are just attacking the messenger here.

There was and still is client side manipulation of the game. (Although they fixed some of the issues)

He may not be right about of what’s causing this ongoing exploits but he still has a point.

Have a bigger summary here:

Greetings Adventurers! As we go live, there going to be issues that pop up while we are actively developing and breaking things within New World. These are some of the Known Issues that we are currently aware of and actively working on resolving. Looking for our Release notes? Click here! If we have any workarounds for a known issue, it will be posted here! Unrecoverable Error “No Product Information Found” may be encountered on game start Loot bag preview takes several seconds to appear P…

Im not gonna, let some dude, decide if i like the game or not, im fully enjoying it.

Remember its a new game… and hopefully getting better with time.

You clearly didn’t watch the video at all. Because it’s not about his opinion on the game, in fact he mentions he actually likes the game and wants to play it. He literally just brings up issues with the game and how broken they are. Nobody cares if you’re fully enjoying it. You’re probably not level 60 yet and have not yet reached end game because to say you are enjoying the monotonous and repetitive content that this game is, would be lying.

‘it’s a new game’ Yeah and? I don’t remember a single MMO that has released in such an abysmal state. Bugs and exploits are being discovered daily, shit that is easily fixed are not being fixed. No shit it’ll get better with time, but releasing a game in this state is downright disrespectful to everyone, including you, who paid for a game.

Most of you fanboys need to realize that the people complaining about the game actually like the game and wants shit to be fixed so they can enjoy themselves. A vast majority of players are experiencing these problems and your little ‘i’m enjoying the game’ posts do absolutely nothing but validate their horrible decisions. I do not care if you are enjoying it, the majority aren’t, and the huge drop in player count and the huge amount of complaints show that.

Dont use it Problem solved .
Same for gold Sellers…dont buy Problem solved
Same for everything else
.
Its not the Game that is the main problem its the gamers that exploit that are a problem as they dont play , but exploit and min max everything.

This ja what comes around if your Game follows meritocracy formula of effort and reward , instead of have fun and a good time playing is the reward.
That is when good sportmanship getan laughed about.

Cannot spoil me the game, i can still have fun and play around sweaty exploiters.

I don’t remember a single MMO that has released in such an abysmal state.

Guess you weren’t in Vanilla WoW then. Feel free to do some research. Start with WoW patch day, have a giggle at the fact that WoW helped with pandemic spread research after a plague ‘escaped’ from BG’s and wiped out the world pop and then finish by looking at Launch day problems. Please don’t look up the (up to 7 days-ish(?) rollbacks that were common, you will cry.

Trust me, NW is an exercise in excellence compared to the first few years of WoW.

Saying that, yes there are some major problems that need to be fixed, sooner rather that later, or it will fade away.

Ahh yes, I remember the plague bug that spread throughout most of Azeroth. Not really sure how much info they could have shared with pandemic research as it was pretty straight forward. One person was infected and ‘traveled’ to a uninfected population, then being in near proximity of those caused the infection to spread, those that were infected could then ‘travel’ to another location and infect others etc. Fairly certain this is common knowledge in elementary school but I digress.

Didn’t Blizz patch this within a few days? NW will need a massive approach to re-code the entire game. Not a light task, thus making it damn near broken at this state.

What I want to know is if the youtuber informed the developers about the issues, log a bug or just created a video, and hoping someone on his viewers will report it… I did not watch the video, I don’t feel watching a video in a forum

Seriously, look it up. Yes they knew the basics, but this was the first time that they had a ‘real’ world example that they could use to examine the distribution vectors. Apparently they were shocked by the speed of the distribution. I don’t remember the specifics but it was an interesting read.

And while Josh is right to bring up the points he did, neither he, nor Callum, actually know how the game is coded and can only speculate. Which will always be worst case and click baity.

I’m enjoying the game and other than the problems with IG and FS I’ve not been impacted yet. I’m also not 60 yet, so take that as you will.