Please remove the tentacle(Metasoma) that where added in 1.1 from Scorpio

U only visit Scorpio in Morning Dale to do the Weapon Quests and now they added tentacle to every platform in Scorpio. U can’t run away from them because on every plattform there are 2 and know u need to do it with atleast 2 or more ppl.

Would be nice if they get removed.

I agree. Went there after the patch and saw they added the tentacles to the area leading up to the castle. My first response was ohh they added some mobs to this area. But after engaging I have to agree with the original poster. Please remove them all, or least least remove some of them but if you must keep them defiantly tone/nerf them down a bit. First they hit way too hard like 4 hit or less a lvl 60 a level 50 gold élite mob should not hit that hard. 2nd they are also very buggy with their leashing/retreating. We tried killing it by ranged and it just kept bugging and retreating to full health. . 2nd we tried being on the same rock as the tentical but tired to use the terrain as cover to reduce the hits as i mentioned above they hit very hard but would constantly retreat when we tried to use the terrain to our advantage. It looks like you’d have to come here with at least a full group of 60s if not more just to clear past the tentacles to get to the castell aera and your gonna need to face take it and particle be right on top of it just to kill it and make sure it does not reset. So not only did you fuck healers again with more nerfs you double fucked healers by making this aera way too hard for its lvl with the tenticales as the life staff needs this for part of the “585 GS weapon quest line”. Please either remove all or some of these tentacles or tone them down and fix the leash bug on them.

Yeah I went there to test the healing changes to see how I do solo compared to pre-patch. I chose Scorpius because having done a ton of the 580 quests I’m very accustom to exactly what I can or cannot do there.

Man I mean I can still solo the place but. Just WHY? Why all these vines? They are so annoying. And why do I have to spend a year to break down the stupid door now?

After the update i went on a run for quest gear and found out that pretty much all NPCs that are “mage” type were buffed way too much. They have a ton of hp and they hit like a truck. Blocking spells as a tank is impossible now since 2 spells will break the guar. Malevolence is harder than Myrkgard. Level 40 elite zones are a real pain for 2x lvl 60 decently gear. Level 30 elite zone feels like lvl 60.
Something is wrong. A damn wall to enter Scorpio takes more than 10 min for 2x hatchet players decently geared because you do 100-200 dmg per swing.
Also tanking was a pain until now with all the pushing and staggering that npcs do to you, now is worse.
On some platform in malevolence there was 1 npc before, now when we engaged 6mobs poped up and while trying to kill them a name elite bear poped up and killed us all.

Whomever is in charge over there needs to be fired. There is so much wrong with this game, it cannot be coming from all of them. There has to be a single shot caller that is FN this entire game up. GET RID OF HIM/HER.

They should fire whoever designed the mob

They already implemented a fix for that one, sort of…I dunno, how does this even happen? It wasn’t in the game before since the beta? 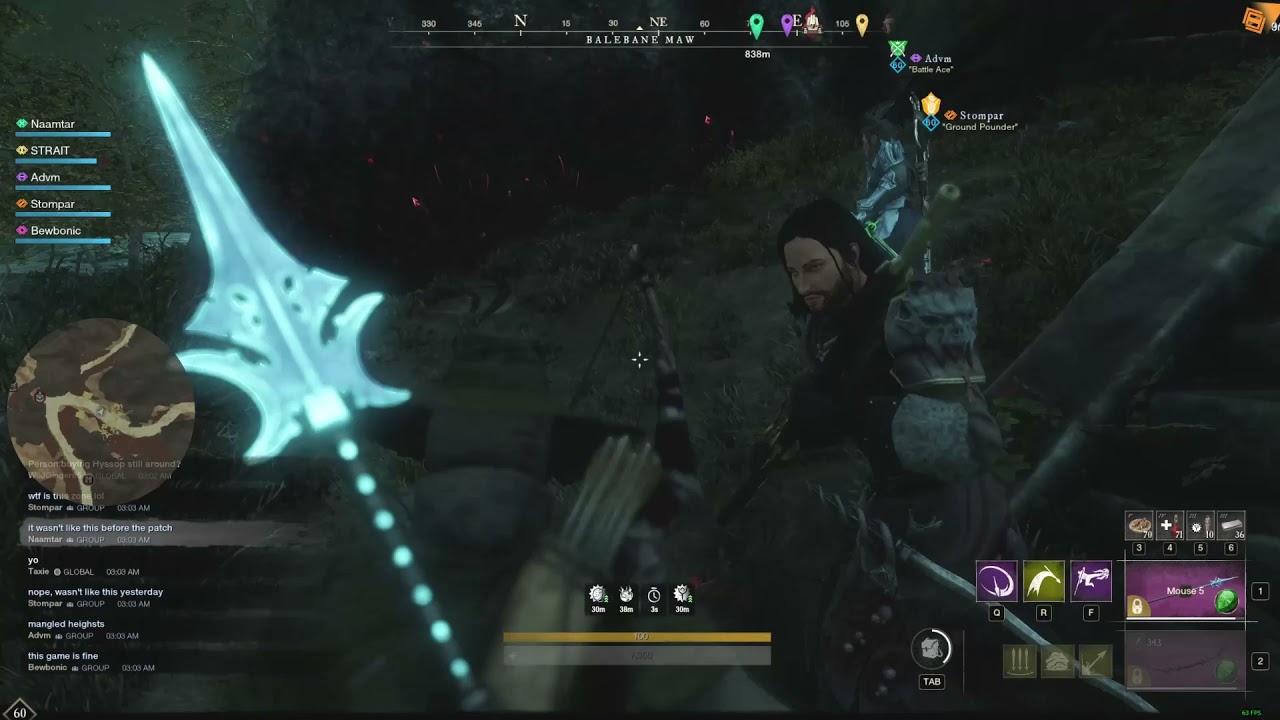 oof… you just are not trying.

You can run past EVERY SINGLE ONE THEY ADDED IN THE GAME WITHOUT AGRO… yes I wanted that to be all caps.

If you go LEFT like it forces you to, you will run in to ONE NEW one they added in, fun fact… pro tip… you can solo it without ever taking ANY DMG if you just stand on the stairs and range attack it.

The only one you HAVE to fight still in the one you always had to fight at the front door.

What NEEDS TO BE FIXED, is how much freaking life those Hellmouth doors have now. They have more life then ALL of the mobs in there added together.

You HAVE to get a group of three at min just to break the doors down before the Tentacle respawns and slaps your group in the back.

Again, sh!t play testing on their part after a big scaling patch like this. They didn’t uncheck the box so static NPC doors wouldn’t scale with the mobs. Or at the very least have them scale correctly like they do with Pool now in Reek.

What NEEDS TO BE FIXED, is how much freaking life those Hellmouth doors have now. They have more life then ALL of the mobs in there added together.

You HAVE to get a group of three at min just to break the doors down before the Tentacle respawns and slaps your group in the back.

I’m pretty sure someone just flipped a global switch to buff anything marked as elite’s HP? That’s what it feels like looking across all zones and weird stuff like the gates.

The issue is the game is now designed to be VERY critical of your build.
Some weapons flat out can’t solo viably now in many locations they could before.

If you run any build that doesn’t have some type of healing, soloing certain mobs is very rough.

I run Void Blade / Life Staff and can do things that most people can’t do solo easy… those areas you mentioned, I solo them now after patch and changes. However there is no freaking way I could do that without all the passive healing from Void Blade procs and tossing out my AoE heals before I attack.

This game is slowly forcing the holy trinity of Tank / DPs / Healer for most of the content if you are not an all in one package build.

Yeah there is without a doubt some mobs and items that shouldn’t have been scaled at all, or at the very least only 25%

I went into the area, and got destroyed in no time, even though someone ran ahead of me, because some retard designed the aggro system

The area is overtuned with their changes to elite zones. I think it they did mention it will be adjusted. Somewhere in the dev tracker they mentioned scorpio/mangled heights wall and mobs.

The tentacles do aggro from way too far out and have range that they shouldn’t before they leash.

But when they can almost get so far away that it’s hard to see if they’re even attacking, and still hit you with their bullshit, it’s a problem yah?

A lot of the foundational content that’s there is really good in my opinion.

What they’ve done since launch makes me concerned there’s something wrong at a foundational level with their process.

I’m starting to wonder if there is something with the engine they’re using or how the game has been coded that will make it so they are incapable of releasing a patch that does not break new things while still keeping players happy. Wondering if they are in a no win situation because of something behind the scenes they flat out cannot change.

That entire move shouldn’t cast more then every 30 seconds, or at the very least remove the KD all together on it.

It isn’t fun to fight those mobs, anytime I see them I groan and just wish I didn’t have to do whatever content I am doing in that area suddenly. One of the few mobs in the game that is a pure killjoy to battle against.

It has every toolset as well when you think about it aside from healing.
Range attacks… large life pools… CC moves that hurt as well… can chase you at times… can see around corners and ground poke your balls…

Like this mob should be a damn boss… oh wait it is, because AGS thinks a boss mob is just a normal mob with a reskin scaled up 200% SMDH

I heard/read somewhere, that the engine they used for the game, isn’t designed for this type of game. I don’t know much about it. But that does sound like, that game is broken at it’s core

What I’ve read about it is that it is very slow to compile by comparison to it’s competitors, and has very long commands to do simple tasks - which is obviously problematic if you’re working on a time table like AGS is with wanting to patch every week.

Previous employees said that the common phrase around the office is “Lumberyard is killing this game.” or something along those lines - I’m paraphrasing because I’m too lazy to go look up the article again.

It makes sense, honestly, if it takes 4 times as long to compile your code then of course it’s going to take 4 times as long to test what you’ve done and then implement adjustments - and what is considered finalized for live has to be presented much earlier.

I am very frustrated with them seeming to think this most recent patch is OK, though, and it will be why I leave the game if they haven’t made a statement on it that involves reverting a huge portion of it - if not the entire thing - by the end of the week. I don’t even think that’s very unreasonable at this point, either, I need to see a dev team that values my time as a player - and has enough confidence in their product to believe I will play it without needing a carrot on a stick. Their current decisions have caused all of my friends to leave the game, it sucks.