Question to the Devs: Are there any significant secrets that have yet to be found?

Obviously you do not need to disclose what they are, but I had a random thought the other day when wandering around the open world. What if there are secret areas that we have yet to stumble upon? I remember months after the release of the game someone found the hidden boss Serenity Maiden Liu after decoding it from the lore pages (unfortunately didn’t have a hidden title or anything cool). Another notable one I can think of is Laura’s Shrine which was dedicated to a dev’s wife who passed away and contains a touching lore note. Other than that there was the way to summon Thorpe in Great Cleave, but it appears that was more of an unintended bug than a hidden secret. With how cool the open world is and with how much potential it has, would be cool if there were more hidden things to find. Always thought it was cool to hear about something unconverted months or even years later in a game.

It just had me wonder, are there other hidden things? Is there a really big hidden thing that we have yet to find? A few small things? Or have we exhausted everything up until this moment? Obviously no details but would be fun to hear there is something out there we might be able to stumble upon.

There is a shrine in-game that is a tribute to a developer who lost their spouse.

The note left is currently bugged (error text string), but I can post screenshots of it if you would like to read it.

I know we can’t have too many of these things. The dev time required for something that essentially gets solved by the community isn’t always the best use of resources but with be nice to have a few things.

I love this question. I’d also like to know if there are any other secrets left to find. No details required, just a confirmation that there are mysteries still to be solved.

The Ghost ship is a neat find

Items dropped by Baines have reversed flavor text. The area is also “Seniab” which is “Baines” backwards

Completely forgot the most obvious one! The ghost ship! This is awesome, some extra things I was not aware of!

Hmmm this is a great question!

The NW Devs didn’t have the same passion as the GW2 and old wow Devs to hide many eastern eggs and secrets in the game unfortunately. Game is kind bland from the exploration side. The view’s are great but you wont find anything beside a few tents and the same model mobs. Every cave is the same one mob a chest and some mining ore. You can put a sword on the ground and a letter with the last words of a fallen adventurer as an example. The lore notes you scatter around the world don’t work. First is that you don’t find them in order and second is that you can’t read them on the spot because of the mobs. And I think that 97% of the players if they don’t read on the spot they won’t read it after from the journal.

At Laura’s Shrine, there’s actually a special, very beautiful music, and in the background, you hear children laughing and Laura’s voice. I’m a rather tough guy when it comes to video game stuff usually, but there I got real tears in my eyes… this is so beautiful.

This is definitely a “MUST VISIT” place, even if you no longer play the game for whatever reason.

Among other amazing places, I will list both Mountain Temple and Serenity Monastery.

@Luxendra do you know who composed that piece ? It’s so beautiful ! 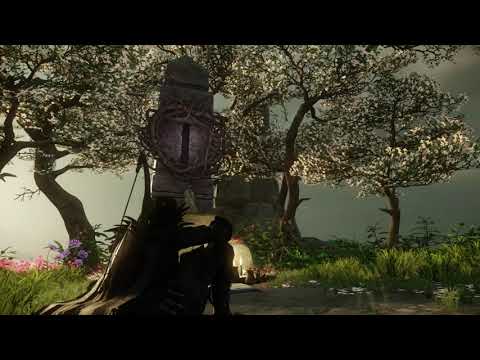 Are there any significant secret that have yet to be found?

I like the fact that you can’t swim in armor.

Yeah and our character’s muscle mass is so high they sink to the bottom!

Apparently they referenced some hide Easter Eggs to be heard in the arenas in terms of the announcer. Curious if anyone finds out what those are!

You can’t swim naked either so your argument is not valid.

you are still carrying all your armor in inventory. But I’m good with swimming as long as you have to remove all your armor and weapons and put on a floaty.

You can’t swim naked either so your argument is not valid.

Haha idk if that immediately makes his argument invalid from a logic perspective. They just appreciate that you cannot swim in armor is all. The next step is to make it so you can swim with light armor and without armor on at all perhaps. Maybe medium giving you a short period before you sink lol.

you are still carrying all your armor in inventory. But I’m good with swimming as long as you have to remove all your armor and weapons and put on a floaty.

Then of course Mr./Mrs. ULTRA logic comes in here and ruins all of the fun haha. Can’t imagine anyone swimming with 1000 lbs?kg? Forget what unit they use in their bags. Maybe this game is more realistic than we ever thought possible…

Ruin the fun? I mentioned a floaty!

I went there to check it out, and i read the letter.

This hurt my heart, but now i can never forget it