Real reason why game is dying, and is not bugs or lag

You want to know why this game is droping so hard?
The answer is really simple, AGS focused in pve content and make a 95% pve game, and pve players are always like this, play the game 2 month, get bored of repetitive content and leave, is not bug problems, is not broken game, is the game is 95% PVE, as simple as that.
You want to know what types of games people play for YEARS and keep playing? Games with TONS of well developed pvp content.
Games where people fight for everything: Bosses, epic items, epic jewels, lands, materials, honor, etc.
History shows i’m right, almost all games that last for years are like that in some how, not all but allmost all.
Well designed pvp content is never repetitive, fights are never the same, people dont get bored and make the game last a lot longer

Amazon, next time you make a massive online video game do your homework, make a list of 25 online games that people play everyday for years and dont die in 2 month, and look what they all have in common… almost all of them will be pvp based games or games with tons of pvp content, games where people compete vs people for something.

it could have been a great game, but is another pve mmorpg that last 2 or 3 month.

I am a huge pvper with my roots tracing all the way back to UO. You are sadly completely wrong in your assessment as history has shown that PVE MMOs have held retention over PVP games. Here are a few examples throughout MMO history

UO - PVP and griefing became so rampant and toxic that they had to completely duplicate the map and create a new land, Trammel (a PVE paradise). Game is still open 25 years later.

Shadowbane - Incredibly fun PVP focused game. However it did not last. Shut down

Warhammer Online - Great game, but due to bugs that made the balance shift improperly and inability to handle pvp structure in a pvp focused game, shut down.

One thing that stood out in all of them. PVP was practically completely abandoned in favor of PVE due to longevity and enjoyment of their customers. These are examples ranging from 2000 (UO) to today (Rift)

A lot of the New World endgame is actually very PvP oriented or requires PvP activity by community choice.

War = PvP
Outpost rush = PvP
Invasions = Indirect PvP on many servers, by requiring you to be a member of an active PvP’ing company

The endgame PvE content in this game is actually very limited. There are some dungeons, but that’s pretty much it. There’s no endgame raiding content. And with that, many PvE players who engage in these levels of endgame content, are lost (for now).

And that’s just the main thing. The path to endgame in New World in my opinion is fine. The world is nice, it’s graphically pleasing. The crafting and gathering, in essence works well. It needs tuning, but the foundation is well.

Endgame content wise though for both parties, it’s just lacking. Company based territory control has been tried, in my views we may say it’s failed as a concept. Much rather more traditional battlegrounds, arenas, ladders and possibly even regional and global battleground / arena championships can definitely help spice up the PvP appetite of players.

Likewise, actual endgame raiding can keep driving PvE oriented players back for more, comparable to e.g. FFXIV. The dropoff in periods of drought will come a lot later that way.

And there’s plenty of us who like both, but simply don’t like for example all forms of PvP. Non objective based open world PvP in my eyes for example is just utter garbage, pointless trash. It serves no purpose in any single game.

We’ll have to wait and see though how AGS continues their development. I don’t feel as if AGS is going to throw in the towel anytime soon. And with some solid content patches throughout the upcoming months, AGS can certainly still continue on shaping this game and its course.

I like ff14 or even the very few I play wow for their pve, just need content, abd this game have none

The pve and pvp are actually as bad, and I don’t think it’s 95% pve

Im actually wondering do you even play the game? Besides the instanced pvp possibilities which you can do for hours a day. There’s insanely active pvp in open world. Yesterday we fought multiple hours for a fort and after that at the pvp missions. We were with about 10 people and the other faction had between 30-60 spread out over the territory. You saying this game isn’t pvp orientated or you can’t find pvp shows you either lack the knowledge to find pvp or you’re just a crying forum rat who doesn’t play the game.

Can you list PVP focused games that were so successful as you claim?

Sure… almost all games have PvP in them. You won’t find any that are exclusively one or the other. Your argument is moot.

Im not talking about only MMORPG genre, all online games in general that last years and years are games that provides players vs players content, full pvp or at least tons of pvp content, but if you want only mmorpg, here you have a video about players database of only mmorpg: 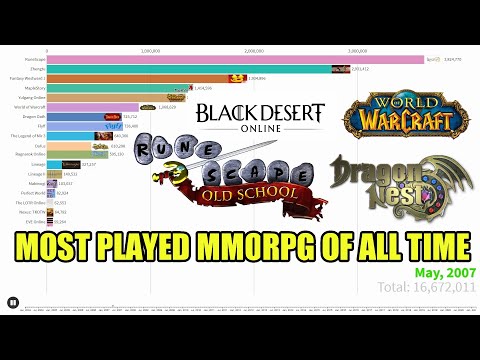 The answer is really simple, AGS focused in pve content and make a 95% pve game, and pve players are always like this, play the game 2 month, get bored of repetitive content and leave,

i’d say eager sweaties arent patient and leave the ship before it has past the harbors entrance.
many PvE Players are level 30-40 now, lots of players are taking their time and enjoy the way more than what you think is the main cause of playing this game.

problem with PvP:
many idiots, toxic, exploit friendly and too often justifying to exploit etc.
itembased aka who grinds more wins aka not casual friendly, only for sweaty tryhard minmax gaming.
If i like a spear and its not meta…
If i like that hat, but its not min maxed…

Warhammer Online - Great game, but due to bugs that made the balance shift improperly and inability to handle pvp structure in a pvp focused game, shut down.

there is a server project with allowance of mythic what is more or less PvP only and its fun to some degree, but gets old very quick if you arent heavily involved into WH and the lore etc.
I think people like it to PvP there because of the setting mainly not because it plays out so well.

AGS focused in pve content and make a 95% pve game

The game in PvP in many aspects, the thing is it is consensual PvP and it seems the PvP crowd shovels their own grave with using exploitive meta’s and AGS helps with an imbalanced and itembased system.

It’s really the exact opposite. Next to no PVE endgame with no long-term trade skill leveling or resource gathering that serves a greater purpose than acquiring furniture and perfect gear.

But I agree on the eventual dying part, if things won’t change.
Maybe they aren’t the most vocal but PVErs/casuals/chill players/whatever you wanna call them - they’re no minority.

-This is coming from a PVP enthusiast. So on a side note I appreciate any more PVP content they can offer, however in the distant future.

problem with PvP:
many idiots, toxic, exploit friendly and too often justifying to exploit etc.
itembased aka who grinds more wins aka not casual friendly, only for sweaty tryhard minmax gaming.
If i like a spear and its not meta…
If i like that hat, but its not min maxed…

You are not wrong. That and the fact that PVEers aren’t a minority coupled with allowing PVPers to pilot the market could lead to a rapid decrease of the playerbase.

The 2nd post should have ended it due to truth.

How can you (OP) be so delusional. I enjoy PVP and PVE. I play mainly PVE though cause pvp in this game is flawed. Open wor’d pvp has no sense (i can’t 1v1 any rzbged player as a tank anyway). Wars are just a shitfest of 50 monkeys throwing shit at each other and funneling on the last point to be taken.

PvE is more enjoyable in my eyes and in most of the community eye, they just don’t complain every 2 mins on forums like you hardcore PvPer that are just frustrated vy not being able to kill bambis in loop.

They already switched from full PVP to PVE because THEY KNEW full pvp had no future.

I would mike to play PVP but i dislike the fact that you need to be part pf a huge company to have any chance to ever govern a territory. On my servers said governors have raised all taxes to high, doing shut xith how they upgrade the toxn, but as a company with 10 friends we can’t do shit.

Watching these are so satisfying

Black Desert is a PvE game. While it has open world PvP you’ll almost never see open hostility between players because the karma system prevents it. In reality PvP in Black Desert is consensual, and you go to specific locations to participate in it.

Runescape is also a PvE focused game. It has PvP but that doesn’t make it PvP focused any more than World of Warcraft, which has open world PvP shards (that are nowhere near as popular as PvE worlds) and battlegrounds which are a joke.

This list of games is not the slam dunk you seem to think it is.

Don’t forget Everquest and Everquest II
Boy that OP is so confused and utterly wrong.

EQ1 the best game ever…doubt I would play it nowadays as it has very harsh penalties and I’ve been spoilt with the “easier” games of today, also I no longer have the stamina to kite those huge rock monsters for hours with my Bard, nor search for my body before it rots. But heck that game is amazing and still alive and kicking.

Well 2 of them are non full pvp, but have a lot and well developed pvp content. They are 7, 10 and 20 years old games and are on tops, you think that says nothing?

Pve focused games dies in months, not all but almost all of them is like a rule.
Game come, 3 month and die, then new patch or expantion and die in 1 month or less, repeat, repeat, repeat.
And then you have those other games, 20 years and people still playing.

All the longest standing MMOs are PvE games. Most MMO players never ever engage in PvP. Most WoW players have never bothered with a battleground.

Conversely, PvP focused games have a habit of getting shitcanned by their second anniversary.

What’d be better to look at, is the number of PvP games that have died. Not saying that PvE games that have some half-assed PvP in them too are successful because of the PvP elements that nobody plays.

Black Desert also just doubled down on it’s PvE content, adding it’s first instanced dungeons ever. Because they know which way the wind blows in MMORPGs.

The game only have wars and outpost, there are no pvp content in open world.
Factions are supposed to be in war, not in partys making elites, not in dungeons all together like friends.
Not raidboss to fight, nothing, just wars.