I am a returning player that left the game in January. I PvP at a high level and have PvPed in other MMOs. Unfortunately OPR has become a FPS shooter with half of all players choosing musket which has become impossible to play against decent players.

In terms of PvP balancing I put this mostly down to changes that have been made since I originally played.

These 2 things have caused the imbalance towards musket being completely overpowered in open pvp.

P.S. in terms of MMO balancing you want melee to be the bulk of a pvp army and lower numbers in ranged. If you have equal or more players ranged in largescale pvp, it will always make for a worse playing experience. If people say melee are OP, you should take that as a good thing but if people say ranged is OP then you should look to change it because that makes the game unfun to play. You should really consider balance with some players before just adding things without thinking about the balancing conequences, just adding more damage in, without more defense, isn’t the best idea imo.

If changes don’t happen soon, I will inevitably end up quitting if the PvP is no fun.

I wouldn’t care about balance if they fix combat controls…

About balance, Raising max health to increase TTK would be good… rather than nerfing each weapon…

But Now is annoying to play PVP because of combat controls. These errors affects to everything. And ruins the user experience.

yes the problem is TTK but simply adding HP isn’t the solution as it effects PvE also.

Muset is a bad design and all new mechanics prove this:

And this will continue. Each next mechanic added to game that can increase dmg will make musket more and more broken. Couse musket is only weapon in game that can take dmg buffs and not pay the price.

yea, have done some research from what the guy on other thread wrote about PTR and what’s in PTR so far makes me happy:

Yea but changes on PTR still buff dmg if you are using build all musket players do use. So it only nerf musket builds that you have when you are new to the game and have no idea what you are doing

hmmm, seems like a good enough solution to me, it’s a significant damage reduction at range.

Ppl did check the numbers. Its crap. Does not nerf. D 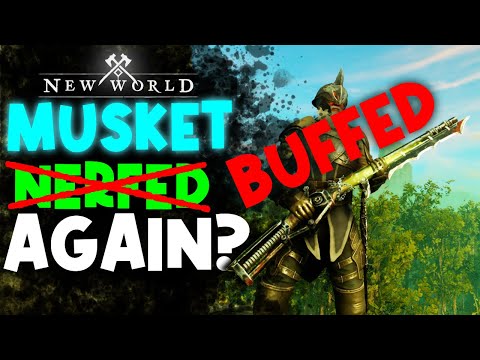 well hopefully they receive this as feedback and make the necessary adjustments before release, it is still in testing. Obviously not reducing the ele damage of it is an oversight. I have to say changing the skill where more damage at distance includes body shots is really stupid and it directly counters the whole point of nerfing long distance XD. Well if the balance patch comes out and is crap I’ll just end up quitting.

Well if the balance patch comes out and is crap I’ll just end up quitting.

I keep playing. But i stoped buying items from shop till they fix combat mess and bring in line musket and rework healing.